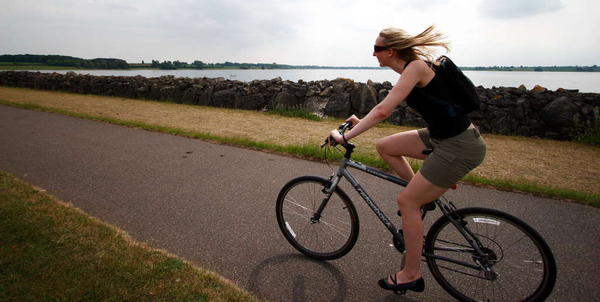 Rutland, Britain’s smallest county, is now aiming to become its bike-friendliest – with the announcement of new cycle routes, and the introduction of a bike-carrying bus.

Astonishingly, the little East Midlands county has the fifth highest proportion of adults who regularly cycle, beaten only by Cambridge, Oxford, York and Hackney. It’s best known for the 26-mile, largely off-road route around Rutland Water reservoir, which attracts thousands of family cyclists every summer. (There’s also, incongruously, an one-day classic cycle race in the north of the county.)

Now, Rutland Council has greenlighted £722,000 to create six new cycle routes across the county. The on-road routes will connect Rutland’s two towns, Oakham and Uppingham, as well as picturesque Stamford just across the Lincolnshire border. Infrastructure improvements will be carried out where the roads are not up to scratch. A series of connecting routes will be added to complete a circuit around the county, and connect with the existing National Cycle Network and National Byway routes.

At Oakham railway station, the only one in the county, a ‘Sustainable Transport Interchange’ will be created. As well as bike parking, this will include a cycle hire operation run by Rutland Cycling – the well-known retailer that hires out bikes beside the reservoir.

Bikes on a bus

Already up and running is perhaps the most unusual part of the scheme – a cycle-carrying bus. The Shorelink service runs year-round, combining a full circuit of the reservoir with trips to Oakham and Uppingham. It calls in at the busiest locations on the reservoir shore, allowing cyclists to ride part of the way and catch the bus back. No charge is made for bikes.

Similar bike-carrying buses have a mixed success record. Cumbria launched a new Bike Bus earlier this year, but Devon’s Surf & Cycle Bus failed to see out the season, despite providing a useful connection to the popular Devon C2C cycle route.