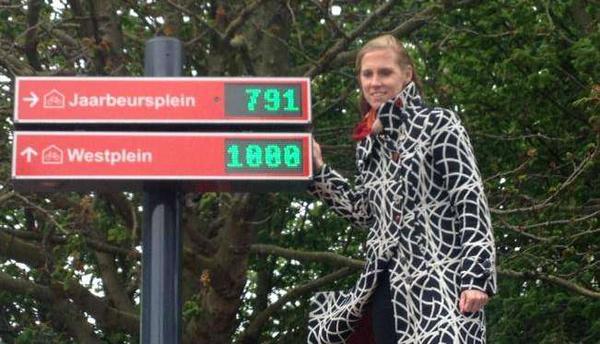 Utrecht has long been the world capital of bike parking, with a 4,200-space park at the station and 12,500 more under construction. But with all this parking comes one question – how do you find a free space?

Unveiled yesterday by alderman Lot van Hooijdonk (pictured in photo by Mark Wagenbuur), 21 digital signs across the city show the number of free spaces at six key bike parks. Though such signs are common for multi-storey car parks the world over, this is believed to be the first such system for cyclists.

Free spaces are monitored in two ways. First, cyclists swipe their ‘OV Chip Card’ to check their bike in and out of the indoor bike parks. This enables a charge to be made when parking for an extended time. Second, the racks themselves contain electronic sensors in which monitor when a bike is taken in or out – a nifty system which also allows the cycle parks to be monitored for abandoned bikes. The counts of free spaces are then transmitted electronically to the network of displays.

100,000 people cycle through the centre of Utrecht every day, out of a population of 330,000. This week the city was named the third best in the world for cycling, behind only Copenhagen and Amsterdam. Copenhagenize calls it “a world leader for cycling among smaller urban areas”.

Previous story: London gets its first 'Tiger Crossing'
Next story: New: cycle.travel directions for the US and Canada