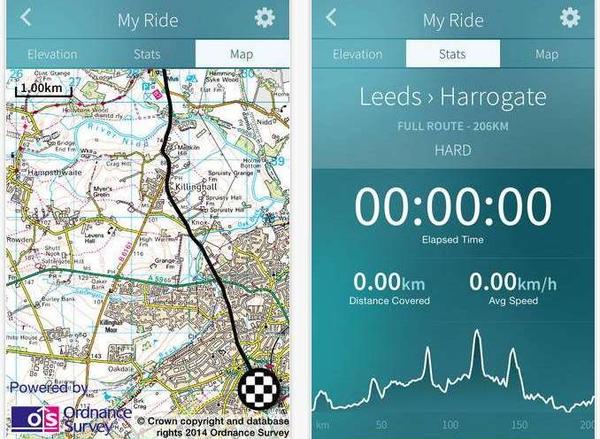 You might have thought it was the Institut Géographique National’s role to map the Tour de France – but with the ride coming to Britain this year, the Ordnance Survey is getting in on the act.

It contains free mapping for all three British stages of the 2014 event, as well as OS maps for historic stages of the tour when the world’s most famous cycle race came to Great Britain in 2007, 1994 and 1974. Each stage has also been split into smaller segments, so that those who don’t want to tackle a lung-busting 200km can attempt a smaller part of the challenge.

The app also includes five bonus routes selected by Chris Boardman, featuring some of his favourite rides from across the country, including Aviemore, Lyme Regis, Llandegla, the Peak District and the Lake District.

Features include elevation plans, speedometer, and the ability to tweet or share your time. According to Chris Boardman:

“OS Ride allows keen cyclists to record, track and share their stage achievements for both the 2014 stages and historic stages from previous tours. I especially like the option to ride smaller segments of the stages, making it accessible for a wide range of abilities and a great tool to support training programmes. This app is a must have for any keen road cyclist with unrivalled mapping accuracy showing added detail including height and elevation data. The digital maps also feature valuable tourist information for those planning to make the most from the areas surrounding the tour stages."

The app is available exclusively for Apple iPhones and iPads and is free to download from the App Store.

And for those with a less masochistic bent, cycle.travel will be launching an app later this year – watch this space.