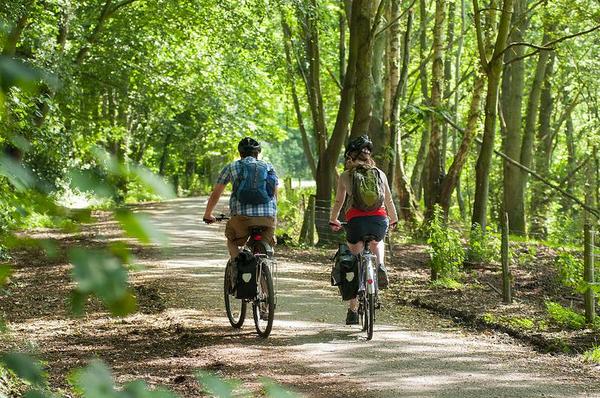 Devon already has the otter-themed Tarka Trail for cyclists – and now a path along the Otter Valley could be built at the other end of the county.

The Otter Valley Trail, first conceived by schoolchildren in Ottery St Mary, is being proposed as a traffic-free route between Sidmouth and Feniton. It would partly use a disused railway line, which currently belongs to 28 separate landowners.

Cycling charity Sustrans has now carried out a feasibility study into the route, and believes that construction would cost just £1.4m – a low price for a ten-mile route – though land acquisition would cost extra. The trail would attract around £600,000 of spending from visiting cyclists each year.

Devon County Council is one of the most bike-friendly councils in the country, having embarked on several major cycling projects such as the new Gem Bridge viaduct just south of Tavistock. Cycling has grown by 15% across the county in the last five years. However, their councillor in charge of highways, Stuart Hughes, warned that the new route would not be built overnight.

“A lot of work would have to be done to make this scheme a reality – look at the Exe Estuary Trail that has taken around 15 years to deliver, with work on the final section just about to get underway. But Devon is a leading authority when it comes to cycling, and we have demonstrated in recent years that we have become a premier destination for cycling tourism.

“East Devon is already popular with visitors and a multi-use route, particularly one which links to the Jurassic Coast at one end and Feniton railway station at the other, would provide an added draw. As well as increasing visitor numbers to the area it would also enable local people to travel to work and school without relying on the car.”

Paul Hawkins from Sustrans called the idea of a new route “very appealing… it would provide both tourism and local commuting benefits”. Local councillor Claire Wright, meanwhile, said: “It won't be easy but there is a huge determination within the local community to make it happen. I look forward to moving the Ottery section of the project forward with the help of the Otter Trail group and other members of the community.”

You can show your support for the Otter Trail by signing the petition on the local campaign group’s website.

Previous story: Cycle Lanes For Dummies - no excuses for bad bike lanes
Next story: The bikes on the bus go round and round

I live in the area of this proposal.   A large part of the Otter Valley already has easy graded fairly quiet lanes which serve cyclists well. Most of the traffic on these lanes occurs at school in and out times ferrying, by car, the very pupils mentioned in the article.  Most of these youngsters could easily safely cycle to and from school on the existing lanes but choose not to.  However there would be scope to upgrade a section of former rail route, currently a permissive way, between Tipton St John and The Bowd near Sidmouth.  Unfortunately, from there into Sidmouth cyclists need to use a busy road - which probably would not appeal to the faint hearted cyclist.  If scarce resources are to be put into developing cycle routes, would it not be better to target those routes where there is currently no alternative but busy main roads?  A good example could be to develop the former rail route into a cycle trail between Exeter and Tiverton along the Exe Valley.       S. Gameson