Cycle Lanes For Dummies - no excuses for bad bike lanes 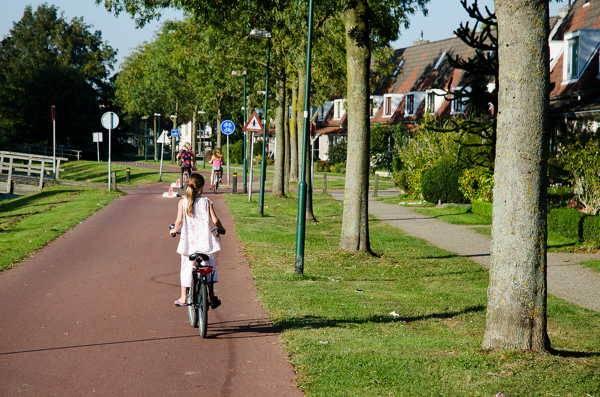 City planners and developers will have one fewer excuse for bad bike lanes in future, thanks to a new guide called Making Space For Cycling.

Written by the Cambridge Cycling Campaign on behalf of Cyclenation, the umbrella group for local cycling campaigns, the guide says that all new developments and street renewals “should be designed for a third of all journeys to be made by bike” – and explains how to do it.

The 36-page illustrated book argues that local streets should be ‘tamed’ with 20mph limits and restrictions on through traffic, while main roads should have segregated, Dutch-style cycleways running alongside. It explains what to do at sideroad junctions, how to choose cycle parking, and how to avoid putting pedestrians and cyclists in contact – aspects that British planners often get wrong.

It lists ten basic principles that should underpin new developments:

For main roads, the guide recommends the Dutch model of segregated cycle tracks. As an alternative option, it suggests that ‘hybrid cycle lanes’, as used in Denmark and Sweden, can be considered: these are on-road cycle lanes yet with some physical dividing line, such as a line of cobbles.

The guide generally recommends against sharing paths with pedestrians, but says these can be useful for wider paths and leisure routes away from roads, and on routes between towns or in rural areas “where pedestrian flows are less than 100 people per hour”.

In a section that will be music to developers’ ears, it says that cycle-friendly developments are easier to sell:

“The attractiveness and quieter environment are a significant selling-point over competing developments. New developments planned around the bicycle will also use land more efficiently. Accordingly, this means that the density of the development – and therefore the number of saleable units – will be increased whilst enhancing the amenity of the area.”

The guide will be formally launched at the Cycle City Expo in Leeds on 1st-2nd May.

You can download the guide here (PDF) or read it in an online viewer.

Meanwhile, cycling charity CTC has launched a companion guide for “local decision makers”. It covers similar ground, but is expressly aimed at councillors and other decision makers, rather than developers and planners. It, too, recommends protected space along main roads, coupled with low traffic volumes and speeds on back streets, and traffic-free routes away from roads. The guide is uncompromising on the standard of bike lane required:

“Unsegregated lanes should not be used though simply on the excuse that ‘there isn’t room for separate provision’. If there really isn’t enough space, and the traffic is too fast or too heavy for children or less confident cyclists to share the road, traffic volumes and speeds need to be reduced to a comfortable level.”

It also draws attention to ways in which funding can be found for cycling improvements. For example, it recommends making roads cycle-friendly when they’re resurfaced:

The CTC guide is downloadable as a PDF.

Finally, Sustrans has launched its Handbook for Cycle Friendly Design (PDF), a condensed version of its full library of guidance. Designed for all audiences from planning directors to cycle campaigners, it focuses on “urban focused solutions to overcoming the barriers that face non-motorised users navigating our towns and cities”. According to Paul Hilton from Sustrans:

“At a time when funding for measures to improve transport in the UK are aimed largely at road building, it is essential that another vision is put forward: a world in which people choose to travel in ways that benefit their health and the environment.”