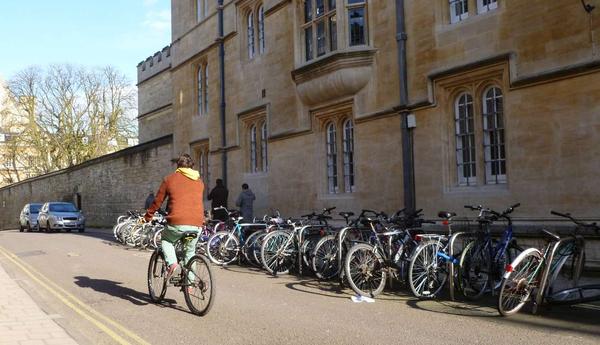 Oxford’s cycle campaign Cyclox, with support from CTC and Sustrans, has launched a ‘Vision for Cycling’ in the university city.

The proposals set out a future where “the wellbeing of the city is supported by clean air and active travel” – and outlines the work needed to get to that aim. The new manifesto was presented to Ian Hudspeth, leader of Oxfordshire County Council, in a photo-call this week.

The Vision states that “Oxford is already one of the best cities for cycling in the UK, but with cycling at about 17% of all trips we are far behind some of our European neighbours”. It believes that this could reach 25% by 2020, including 30% of journeys to work.

To achieve this, it calls for at least £10 to be spent per head on cycling, led by “an inspirational Cycling Champion”. It proposes that Oxford should aim for a “comprehensive unbroken inclusive dual cycling network”.

The dual network, which provides both fast, direct routes (‘cycling freeways’) and less busy ‘quietways’, is a long-standing aspiration for Cyclox:

“The standards to which the two networks are constructed should be no different, but the engineering designs are likely to have to solve different problems. Freeway route design must pay greatest attention to minimising the hazards of close traffic. Quiet routes will have to take especially into account interactions with pedestrians, whether shared-space or segregated.

“This means a continuous, uninterrupted route, provided for cyclists in both directions. A constantly-heard criticism of the present provision is that it is not continuous. Signs that display ‘End of Cycle Lane’ must be consigned to the museum.”

Outside Oxford, the document calls for better routes to nearby towns and villages such as Eynsham, Abingdon and Woodstock.

The full document can be viewed online here.