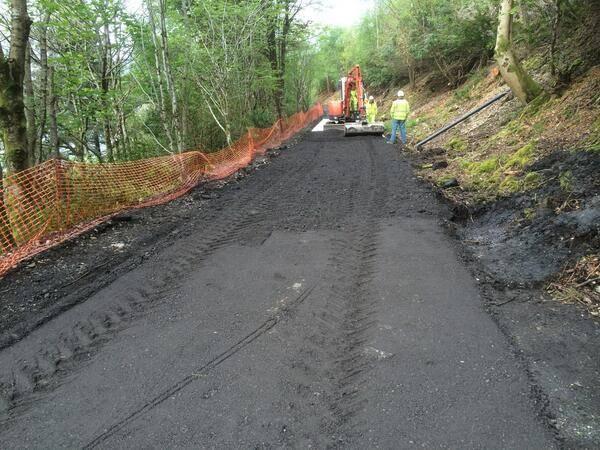 Cyclists could be enjoying a spectacular new touring route from Oban to Inverness as soon as 2015 – and construction is now underway on one of the crucial ‘missing links’.

Dubbed the Caledonia Way, the new route (National Cycle Network route 78) is set to become the most popular cycle challenge in Scotland. For the really dedicated cyclist, there’ll be 228 miles of route altogether, from Campbeltown (on the Kintyre Peninsula) to Oban and on to Inverness.

Since 2007, Sustrans has been working on a cycle path between Oban and Ballachulish, 32 miles along Loch Linnhe which are currently dominated by the busy A828. Now, construction teams have moved in on the crucial Kentallan–Lagnaha stretch (pictured), connecting two existing sections of cycle route. Part of the new path follows an old railway trackbed, while the rest crosses the hillside with spectacular views over the loch. When this is complete, only a couple of short stretches further south will remain to be finished.

Quiet lanes, ferry crossings, and the Caledonian Canal towpath will complete the route up to Inverness via Fort William. In the long term, Sustrans is hoping that Transport Scotland will extend the traffic-free path from Ballachulish on to Fort William beside the A82 trunk road, which it runs. For now, cyclists are encouraged to use the ferry to cross onto the quiet road on the western side of the loch.

The Oban–Ballachulish route will also improve the ‘Road to the Isles’ for cyclists, making it easier to cycle to Skye – though 19 miles of busy road remain along the A830.

As well as being a cycling challenge in itself, the new route will be useful for Land’s End to John O’Groats cyclists, and for local residents and holidaymakers in the area.

Check out the currently open sections of route from Oban to Fort William on our map and journey-planner.

Previous story: Cycling is the new golf - literally
Next story: Five penalty points for driver who rammed a cyclist

This is going to be a wonderful upgrade on this route, which is even now one of the great bike routes in UK.