Liverpool plans bike route in the sky (with diamonds?) 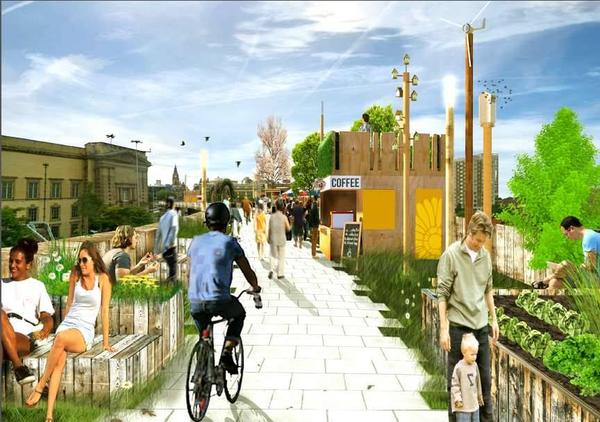 An ambitious plan to transform a Liverpool flyover into a ‘bike route in the sky’ has sailed past its first hurdle.

The Churchill Way Flyover is proposed for demolition by Liverpool City Council, at a cost of up to £4m. But the Friends of the Flyover think it would be better reinvented as a public space, cycle route and walkway, with markets, allotments, and exercise areas along its length.

The first challenge for the Friends was to raise £40,000 for studies into the project – which they succeeded in doing on Monday night. 361 people chipped in to help pay for the work. The money will be used to undertake detailed surveys, work out business plans, and consult with the council, Liverpool John Moores University, and National Museums Liverpool.

Kate Stewart, from Friends of the Flyover, told the Liverpool Echo:

“It has really been quite overwhelming to see how much the city is taking it to heart. Lots of businesses have been supportive and it feels more like a partnership across the city. The public have been incredible.”

The project is deliberately modelled on New York’s High Line, where a mile-long disused railway viaduct became a public open space. If it comes to fruition, there will be cafés, independent shops, and market stalls along the length of the flyover.

For cyclists, a new route would be opened up between the city centre and Lime Street station, currently an unpleasant experience on a bike. The flyover would be lit at night thanks to wind and solar energy generation.

Find out more at the Friends of the Flyover website.