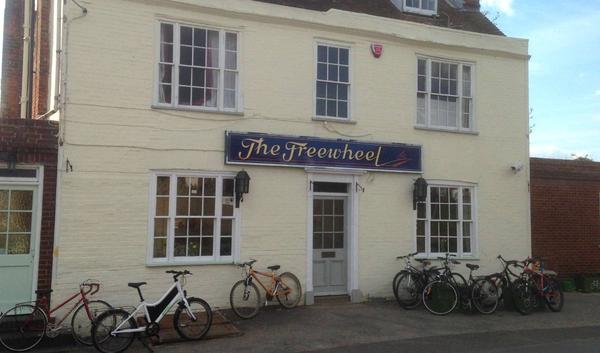 There are dozens of cycling cafés around the world, but surprisingly, it’s taken until now for Britain to get a cycling pub.

The new pioneer is the Freewheel in Graveney, Kent, which has recast itself as a “cycling destination pub”. Facilities include a bike workshop, cycle parking, a group lockup, and its own array of bicycles including a “seven-seat monster bike”.

“When I went to view the property there were cyclists going past even then, so I saw the potential. The pub is ideally located two minutes from the National Cycle Route which runs all the way through Kent [NCN 1], so there was no better opportunity for me here.”

Just as importantly, there’s real ale from local breweries, and real cider too. Homemade food is served, made from produce which Adrian collects from local farmers on his cargo bike.