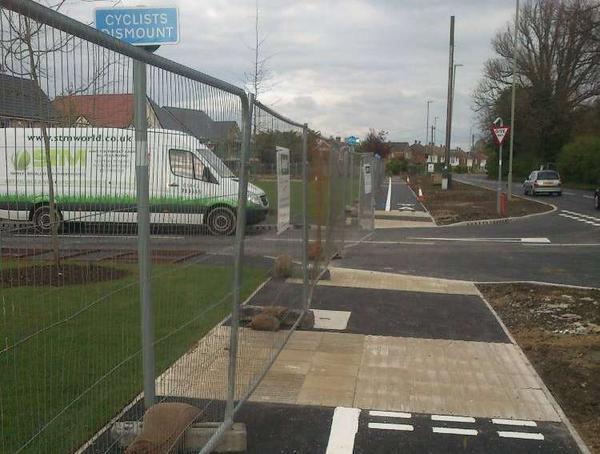 Cyclists in Didcot have slammed a new cycle path for poor-quality provision.

The path on Wantage Road links to a new development at the Great Western Park, built by Taylor Wimpey. But the local cycle campaign HarBUG, the Harwell Bicycle Users’ Group, has identified a litany of problems with it even before it initially opens. They include:

HarBUG say that this type of path would be better off not built.

“We have seen that this type of cycle lane causes more problems for cyclists. It is not much use for cycle commuters to Harwell village or the Campus. Some motorists seem to think cyclists must use cycle lanes if they are provided – and will let you know about it.”

Citing assurances from the developers that the new estate roads would be safe for cyclists, they ask why there are so many instructions to dismount when entering them. HarBUG are now contacting Taylor Wimpey and Oxfordshire County Council to discuss the situation.

Previous story: Become a bike barista with the Wheely coffee cart
Next story: One in three haven’t ridden a bike for ten years