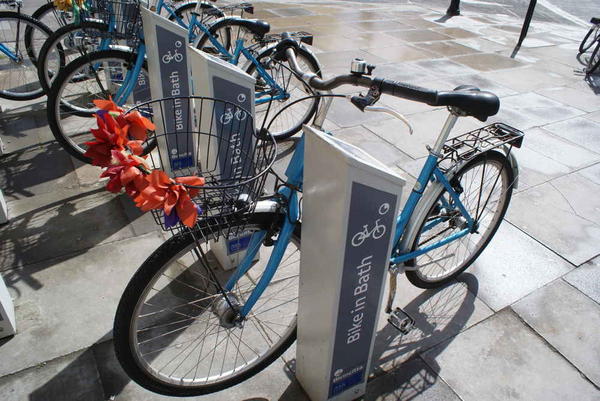 The cities of Bath and Glasgow are each to get a ‘Boris bike’-style hire scheme, both to be run by German company Nextbike.

Glasgow’s hire scheme will be entirely new, whereas Nextbike in Bath will replace the existing ‘Bike in Bath’ operation. Both operations are set to start in late spring / early summer.

In Glasgow, there will be 37 docking stations. Maintenance will be carried out by local charity Glasgow Bike Station. The city council is paying £600,000 to buy the 400 bikes. The Evening Times has named the docking station locations, which include railway and bus stations, public squares, both universities, and the SECC exhibition & conference centre – plus six stations which will be in operation only during the Commonwealth Games.

Meanwhile, the new Bath bikes will be permitted to go outside the city centre, opening up the possibility of rides through the Two Tunnels and along the Kennet & Avon Canal.

How it will work

As in London, there’ll be options to suit both regular users and one-off visitors.

Regular hirers can pay for annual membership, expected to cost £60, and then enjoy half-hour rides without charge. Longer rides will incur a cost, but with a maximum of £5 per day, this will be less punitive than in London. GPS tracking is intended to deter thieves.

Unlike London’s Boris bikes, the bikes will include an integral combination lock, so you can leave them outside a café or shop rather than having to find a docking station.