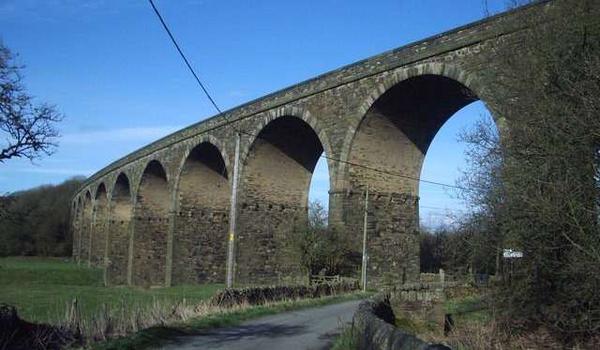 Lancashire people are calling for a 19th century railway viaduct to be opened up to cyclists.

Martholme Viaduct, between Padiham and Accrington, was once regularly used by local people, but has not reopened since the foot & mouth disease outbreak of 2001.

Although the viaduct itself is owned by Railway Paths Ltd, which offers access to hundreds of miles of old railways via its allied charity Sustrans, the access to the viaduct is owned by the nearby Bridge Heywood Caravan Park – who have rebuffed entreaties to provide access.

Local people say it would be an invaluable link for local walkers and cyclists, joining two traffic-free paths, and providing links into the Lancashire Cycleway and Leeds & Liverpool Canal. Campaigner Barbara Sharples told the Lancashire Telegraph that access from each end was crucial:

“The opening of this footpath would join up the Hyndburn and Padiham Greenways and enable safer circular walking and cycling routes. There’s no point in having the viaduct open if all you can do is walk up and down it.”

“The landowner’s objections to the cycleway were based on his concerns that his site was marketed as quiet and secluded and that it would cause disturbance to his tenants causing them to leave. There does not appear to be any evidence to support this assertion. His impending addition of holiday let caravans and the highlighting of existing high demand for privately owned and holiday let caravans [in a recent planning application] appears to belie his assertions that his business and the local economy would suffer if access to the viaduct was reinstated. ”

And the local primary school has also weighed in, with headteacher Mark Dixon writing to Mr Hanson.

“Your Holiday Park users would value and gain massive benefits from direct access to a leisure facility such as the wider greenway system whilst on holiday to pursue activities such as cycling and walking with safe, off-road access to other towns and places. Please just let me know if you’d like me to unleash a torrent of persuasive letters from millions of local school children. Just give me the nod and I’ll get that sorted… as long as you promise to mark them all!”

Campaigners have now launched a petition and are seeking 1,000 signatures by the end of June. You can sign up here.