For several years, I’d seen this curious little blue cycle signs with red numbers on them. There was one on the edge of Banbury I’d pass regularly, that pointed to Stratford-on-Avon, some 31 miles away. Surely there wasn’t a cycle track that long?

I was working at British Waterways at the time, on their leisure website waterscape.com. We used to get Sustrans press releases at the office, and one came through about a World Heritage Site bike ride from Newport to Blaenavon. With the not-entirely-bogus excuse that part of the route would be along the Monmouthshire & Brecon Canal, I absented myself from the office for a day, loaded my old Giant ‘racing bike’ (remember when they were called that?) on the train, and headed off.

It was a revelation. (a) This National Cycle Network thing is really quite good, (b) South Wales’ scenery is much more interesting than you’d think, (c) I really need to get a new bike.

So, a couple of months later, I booked a week off work. On the Saturday, I went to Beeline Bicycles in Oxford and bought myself a Ridgeback Velocity; phoned up Cardiff Youth Hostel to book a bed for the night; stuffed some clothes and a bunch of OS maps into a tiny pannier; and loaded the whole lot onto the train.

I’d had the vague idea of cycling National Cycle Network route 8, aka Lon Las Cymru. I didn’t know at the time that it was reputed to be the hardest route on the network.

And, indeed, it wasn’t too tough heading out of Cardiff along the Taff Trail, a collection of old railway and canal paths up the Valleys. It was a smooth surface almost all the way to Merthyr Tydfil. After this the route heads into the Brecon Beacons and it gets a bit rougher, especially the rough forest tracks near the top of the Pontsticill Reservoir. Still, the new Ridgeback was coping admirably. 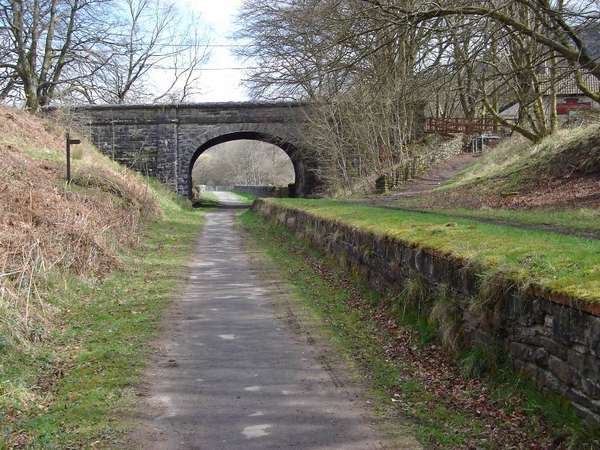 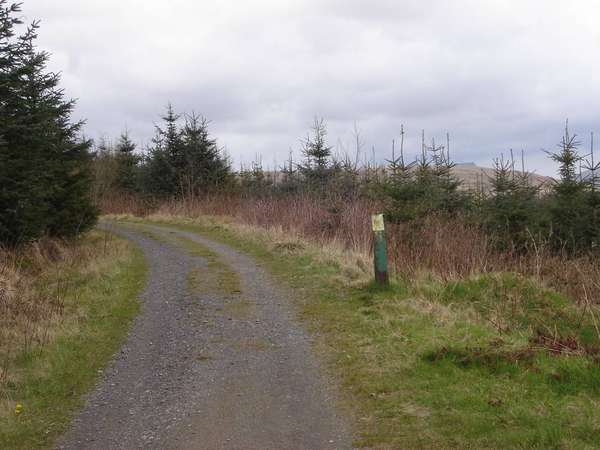 (Forest tracks over the Brecon Beacons.)

Brecon arrived sooner than expected, where I bought the two official maps for the route from the Tourist Information Centre. These first few hours had taught me that maps are really, really helpful when following an NCN route – even if just one sign is missing, it can throw you off the scent completely – and that OS maps, for all their many virtues, really aren’t that good at marking the NCN.

Though I’d considered staying overnight in Brecon, I figured the day was yet young and I had enough wind left in my sails to carry on. So I found a independent bunkhouse in the Wye Valley, phoned up the owners to book a space, and set off.

At which point the rain started. So did the hills.

Where there isn’t an old railway path or a canal towpath, the NCN usually avoids main roads by diverting onto country lanes. Unfortunately, in Wales, the main roads hog the valleys, leaving the country lanes to go up hill and down dale. (Mostly up hill.) The hills from Brecon to Glasbury weren’t too extreme, but enough to make me grateful to reach the bunkhouse at Erwood a few miles further on. Rather fortuitously, both the bunkhouse and the owners’ B&B were empty, so they invited me to stay in the B&B for no extra charge.

Day 2 and the vegetarian fry-up in the morning was surprisingly good. In theory, the route followed the Wye Valley for the next 37 miles. In practice... it does, but not always faithfully. A couple of sharp climbs up the valley sides after Builth Wells made me wish I’d had that second vegetarian sausage. Then there was the notorious Old Coach Road after Newbridge. The map warned about the surface, and it was right: so boggy that getting off and pushing was the only option. (The surface has since been improved.)

The Ridgeback wasn’t too happy after this, making ominous graunching noises on the way into Rhayader. Clive Powell Mountain Bikes on the edge of the town, an excellent shop, were happy to put this right as well as serve tea and flapjack.

Then came one of the glories of the trip: the valley road up from Rhayader to Llangurig. I’ve cycled it several times since and it’s easily in my top 5 roads on the NCN, along with Cwm Gwaun in Pembrokeshire (NCN 82) and the unsignposted Upper Coquetdale valley on the Pennine Cycleway. It’s a tiny, windy, tree-lined avenue running on the west of the Wye, while all the traffic takes the A470 to the east. Best of all, there’s a pub at the end in Llangurig. 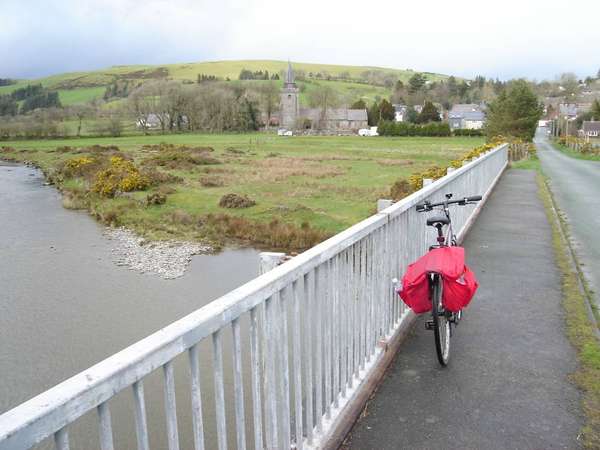 (Leaving the Wye behind at Llangurig.)

After that, it gets difficult again. Having been lulled into a false sense of security by this lovely road, the climb out of Llangurig was a punch-in-the-chest experience just like the Brecon–Glasbury section. It’s no surprise it’s hard work: it’s the watershed between two of Britain’s greatest rivers, the Wye and the Severn.

The Severn valley, though, is pretty steep up here near its source, a far cry from the languid Worcestershire river. These are the slopes of Plynlimon, the mountain on which both the Severn and Wye have their source, though calling this great mass a ‘mountain’ isn’t quite the right word. In retrospect, I should have taken it a little easier and gone to look at the waterfalls of the infant river – having done so more recently, they’re worth seeing.

Still, I hauled myself slowly along this lovely, virtually traffic-free road, knowing that the Big Climb was coming. The edge of Plynlimon is the highest point of Lon Las Cymru. Everyone tells you it has a false summit, yet somehow you manage to convince yourself that this really is the top… until you hit it and see the next one. There’s one of those curious arty NCN mileposts at the top, so you can lean against it and have a breather. 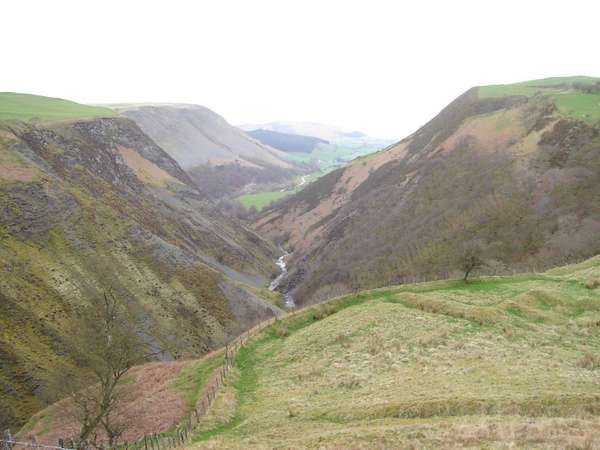 (The views from the climb up Plynlimon.)

And then: hell yes. 7.5 miles of pure descending bliss into Machynlleth, from the highest point of the route straight down to sea level again. The road’s not too twisty, the views are superb, and you can just let go. I rolled all the way down into a town centre inn with comfortable beds and proper warming pub grub. It can’t have taken more than 20 minutes but what an exhilarating 20 minutes they were.

Day 3 and another fry-up to start the day, this time made of real dead pig. Machynlleth’s pretty attractive in the daylight and I’d like to spend a few more days there sometime. This time, I headed north still on NCN 8, leaving the ‘attractions’ (I use the word advisedly) of the tough alternative route for another time. It’s another valley road to begin with; most of the traffic took the A road on the other bank, with this little road only really catering for visitors to the Centre of Alternative Technology.

After the slate-mining village of Aberllefenni came the real killer. I’ve done a few thousand miles on the NCN since this first trip, but this remains one of only three hills that have been so steep I’ve had to get off and push. (The others are Crawleyside Bank on the C2C, and the start of the Chilterns on NCN 57. The latter is particularly hilarious as it comes after the seven-mile, pancake-flat Phoenix Trail. Whoever designed that has a really, really evil sense of humour.) This is a tarmaced dead-end that sees very little traffic, and the views back are great. None of which actually makes it enjoyable per se. Still, maybe one day I’ll go back and manage to get up it without getting off. 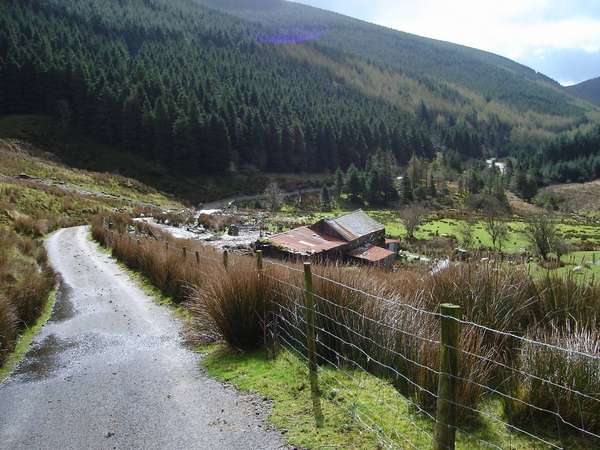 (It’s steeper than it looks… honest!)

The descent isn’t fully surfaced, but the winding track through farmyards was good fun. And there’s respite afterwards: the Mawddach Trail from Dolgellau to Barmouth. Unfortunately this flat old railway path also had a rotten headwind on the day, but a pub stop at Dolgellau had given me the energy to push on. 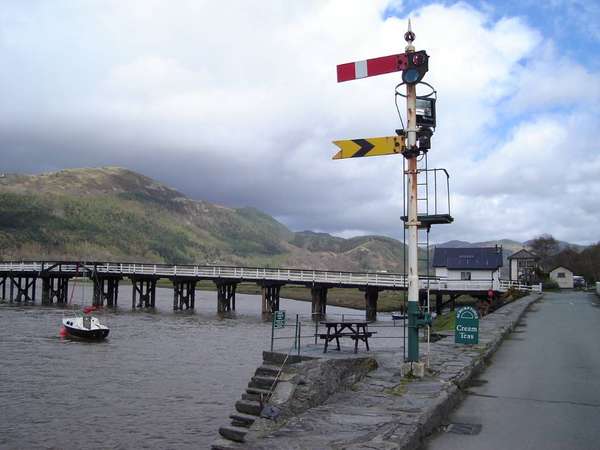 (The Mawddach Trail. Can you tell it’s an old railway?)

After a brief spell of A road, the route climbed again to the high moors above Harlech and the coast. Wild, little-ridden country – I don’t think I saw a single other cyclist – but the views over Cardigan Bay were superb. I was feeling fairly shattered by then, but the climb was worth it. The route through Porthmadog to Criccieth was fairly inconsequential (aside from the narrow-gauge steam trains at Porthmadog itself), but Criccieth itself is a lovely place to arrive in when tired, full of welcoming pubs and B&Bs and, of course, that castle.

The castle was open, but most of Criccieth was shut. This was springtime, and decidedly not holiday season in Wales. I eventually found a seafront B&B that was open, but none of the pubs were serving food. The chippy opposite the castle isn’t bad as chippies go... but I’m not entirely convinced it’s the best ‘sports nutrition’ for another day’s cycling. Ah well. Nuts to sports nutrition.

The final day was, scenery-wise, the most understated of the four. Lon Las Cymru skirts the western edge of Snowdonia on an old railway track, so although you see Snowdon looming up to the east, you never really feel like you’re near it. Still, Caernarfon is always enjoyable (too early for a pint at the Black Boy, sadly), even if a seagull did decide to empty itself on my hand as I was walking around the town. Over the Menai Bridge, Anglesey’s lanes are quiet, winding, each one very similar to the last, but a pleasant enough way to meander to the finish at Holyhead. 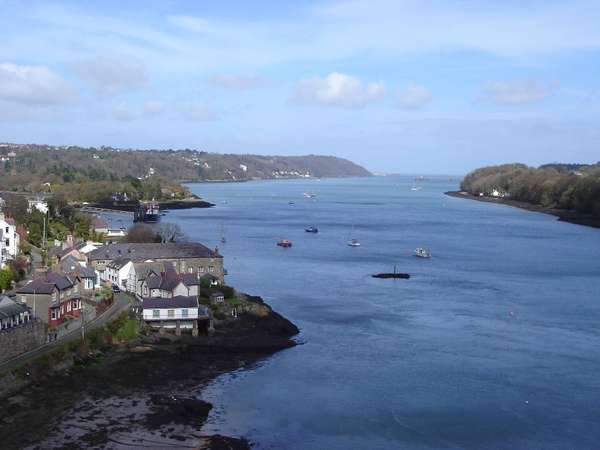 (The view from the Menai Bridge.)

The signs gave out as I got to Holy Island, but it was easy enough to find the way to Holyhead station – where I arrived with just five minutes to go before the last train home.

It was a terrific introduction to the NCN. Lon Las Cymru certainly isn’t easy, but it’s not the monster that some would have you believe. If you can do the C2C, you can probably do Lon Las Cymru. The scenery is the equal of any other route (except perhaps the Pennine Cycleway, but that’s another story).

For me, Mid-Wales was the highlight: the wonderful lanes of the Wye Valley, the stunning descent to Machynlleth. If I were to do it again (and I hope to), I’d be tempted to finish the route at Criccieth rather than going all the way to Holyhead, and spend more time in the central part. That said, if the cycleway on the west flank of Snowdon through to Caernarfon is ever completed... that’ll become unmissable, too.

"After this the route heads into the Brecon Beacons and it gets a bit rougher, especially the rough forest tracks near the top of the Pontsticill Reservoir. Still, the new Ridgeback was coping admirably."

I did the Taff Trail part of this route from Newbridge-on-Wye into Cardiff in May on a Spa Touring with 2 panniers. I'd recommend that road bikes don't go through the forestry above the reservoir - the trail comes out of the forestry onto the road at the pass near Fan Y Big. The road looks incredibly steep but I'd think it would still be quicker than riding on the extremely uneven surface in the forest. While I was there some logging work was being carried out and the trail was cut up by the big forestry vehicles and there were many stretches when it was necessary to walk. A fabulous route though. I've been to Cardiff many times but the ride along NCN 8 is the best way of getting there.