This ride was done either after dark or in a hurry, so I don't have many pictures worth uploading... even some of the ones I'll upload are mostly black rectangles!

Coventry station is a building site at the moment, so I walked out of the station to the toucan crossing and I'm not sure quite where I went or if there was a better way. Once across Warwick Road, I followed the cycle track around the corner into Westminster Road and was dumped onto a footway without warning, so I rejoined the road.

Then things improved: the road was fairly quiet and a little way along, a cycle track left signposted "University of Warwick [52]" led to a ramp up onto a bridge over a retail park car park (strange) and the railway (less strange). It was a bit narrow but worked for me because it was fairly quiet. This led to a track which I think was between a park and a school that was a bit uneven but still not bad... but at the end, there was an unreasonable-looking "Cyclists Dismount" sign so I simply gave way and then rode across a road into a fairly quiet and wide residential street.

The route through a few similar streets was mostly signposted, although some signs had been spun around - vandalism or collisions with high-sided vehicles? It was easy riding but it had just started to rain.  I reached Kenilworth Road and remembered to turn right onto the cycle track on my side, rather than turn across the road.

Until the A45 junction, the cycle track was usable but poor. I think it was an old track that is long overdue improvements - it was a bit too narrow, with some unnecessary hazards that you could easily miss if your headlight isn't suitable for unlit roads. There was a black public litter bin blocking the cycle track at one point (can't find it on Streetview so maybe some idiot had moved it there as a joke?), a fence end-on at another and markings inviting me to ride the wrong way through a bus stop somewhere else. I dodged all of them, plus dealt with some very-poor side road junction layouts which will be familiar to most cyclists in this country.

After a typical "walking and cycling gets lowest priority" staggered crossing of the A45, things improved. The cycle track alongside this part of Kenilworth Road isn't bad. It's maybe 2.5m width of smooth tarmac, with a wide verge to the carriageway and another verge to the footway. Some of the driveway crossings are a bit lumpy and some annoying householders had stood their wheeliebins on the cycle track, but the track was quiet and I coped. They'd got the side road junctions wrong (tram line tiles pushing cycles onto the verge, carriageway corners too wide and so on), but in general, if more cycle tracks were this good, I think most people would use them rather than busy carriageways. This really should be the minimum standard for cycle tracks where space is available.

I soon sped along this section, with an irritating pause for another low-priority crossing - this time of Gibbet Hill Road. I had intended to turn off up a side road and use more of the NCR 52 for the last bit into Kenilworth, but it was wet and dark and things were going well, so I continued alongside the main road... and then I crossed into Warwickshire, the footway merged into the cycle track and before long, cyclists were directed to turn right across the carriageway and rejoin it... so I rode a couple of hundred metres uphill along an A road to the NCR52 bridge in Kenilworth and turned right onto a ramp up to the bridge. I couldn't see any good reason why the cycle track doesn't just continue to connect up (most of it's wide enough with good visibility), but at least I don't remember any motorists being silly while I rode on road.  Here's a picture of crossing the bridge, which illustrates why I haven't many photos! 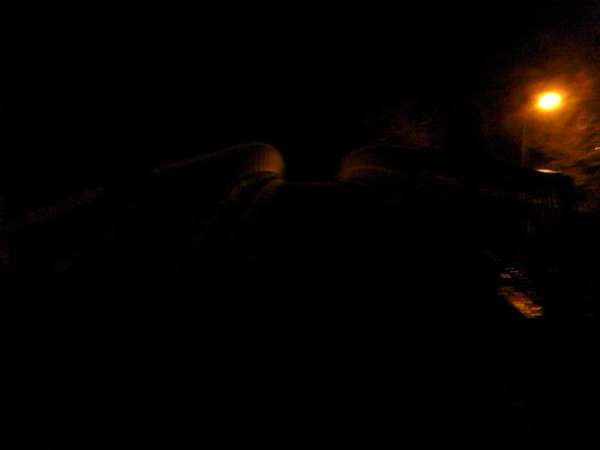 The surface of NCR52 seemed like gravel stuck onto tarmac (or not stuck in places) and it was slightly downhill, so I freewheeled along the first section under a bridge. The track was fairly quiet and I passed one other cyclist and a couple of dog walkers. There was then a sharp right turn which required quite heavy braking and concentration not to skid on the loose gravel.  After a bit more twisty track, there was a poorly-signposted fork to the left which was obstructed by a tight chicane - right next to an unobstructed route for horses which any illegal motorbikes could simply use too, so what the heck was the point of that obstruction?

Confusing signposting at the end of the next road left me cycling up the footpath of Albion Street for a while before I rejoined the carriageway and continued into Kenilworth centre - not shown, but here's a picture of the High Street... 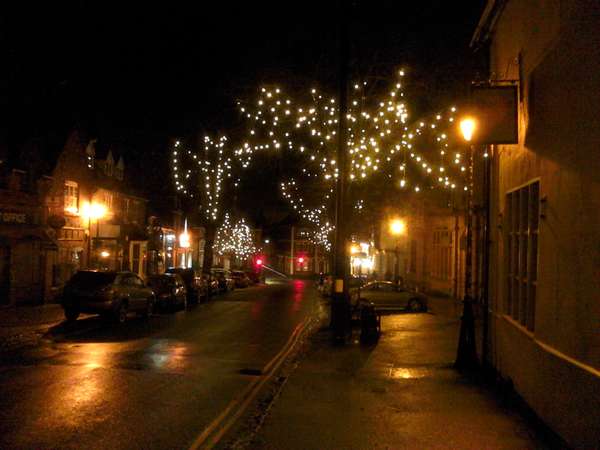 Apparently, if I'd ridden the rest of NCR 52, I would have been dumped head-on into a bus stop on an A road at the bottom of a fairly steep valley with this sign! 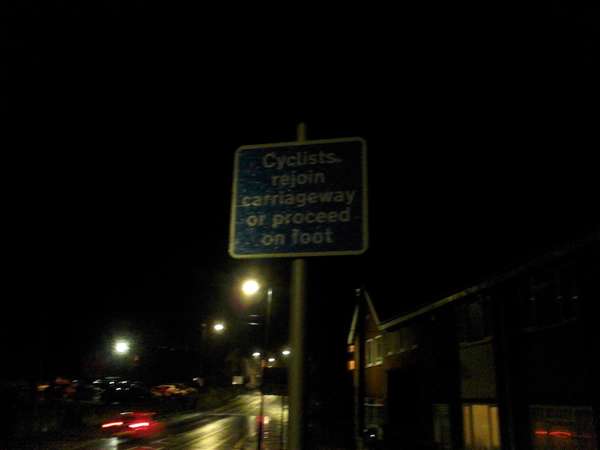 Once again, I do not understand why Warwickshire doesn't do things properly and either add cycle tracks or decent cycle lanes or at least provide a proper junction between NCR 52 and the road!

I turned and headed towards Stoneleigh along Albion Street, Mill End and Dalehouse Lane. The road turns from a crowded and safe-feeling residential street to a more open suburban feeder road and then into a typical country road. It had a 50mph and not too much traffic but a few motorists seemed impatient, revving their engines and following too close, but only one actually overtook poorly and honked as they did so.

The roundabout with Stoneleigh Road was busy, apparently because of how close it is to the A46 junction, but I squeezed through and rode up and over the A46 bridge, then downhill into Stoneleigh.  I was slightly surprised just how steep-sided the valley was, but I headed back towards Coventry on the B4113.  This was signposted as a cycle route but they looked quite old blue fingerpost signs and there did not seem to be any special cycling-friendly features.

On the edge of Coventry, I tried using what looked like a housing road parallel to Leamington Road, but it dead-ended and I pushed along a footpath to rejoin the road.  The next legal left turn did put me onto a parallel road, though, and a cycle track allowed me to cross the A45 rather than try the roundabout - I was not feeling up to sprinting by this point and it looked like the sort of roundabout where sprinting would be necessary.  Then I crossed Leamington Road into another parallel housing road - as I crossed, I thought that bit of Leamington Road seemed very wide and probably wouldn't have been bad, but I'd crossed by then and it was touch-and-go whether I'd make the train I wanted.

I rode through some housing estates without problem. There were no specific cycling-friendly features, but the streets were fairly wide, fairly smooth and fairly quiet.  After passing under one railway (Coventry-Leamington) and over another (West Coast Main Line), I turned left and then guessed my way back through the building works to arrive at the station from the opposite side to I left, just in time to catch a train.

All told, not a bad ride, but I was surprised that it was really obvious how much worse cycling infrastructure became once I crossed from Coventry's council area into neighbouring Warwickshire.  If I'd had more time, I would probably have tried a different route into Coventry using more cycle tracks, to see if I'd just got lucky with NCR52 south from the station.