London's hire-bike network, aka Barclays Cycle Hire, is streets ahead of anything else in the UK. Cramming on a tube can become a thing of the past; once you've registered, these robust, if slightly clunky, bikes are free to use for half an hour within central London.

You'll never be first off at the lights, but you'll get there faster, and cheaper, than your subterranean counterparts. For outer-suburbanites, in particular, it takes away the hassle of forcing your bike onto an over-crammed commuter train: park your own bike at the station, pick up a Boris bike in town.

Bikes are hired from docking stations scattered around central London.

Only 30 minutes? Yes; this isn’t “bike hire” in the traditional sense, but simply a free bike for each journey you make. You don’t leave the bike outside a café while you’re chatting with friends; instead, you dock it, go to the café, and then take a new one afterwards. This maximises the number of bikes available at any time. Besides, you don’t want to have to pay for a replacement if it’s stolen while you’re hiring it…

How you do it

Pressing ‘Hire a cycle’ on the docking station’s touchscreen prints out a little slip with a code on it. Find a bike, enter the code, wait for the green light, and firmly pull the bike out of the rack. (You’ll find this easier if you lift the back wheel up.)

You can return your bike to any docking station. Just push the bike back into the rack – and do it hard; a gentle nudge won’t lock the bike in place. A green light comes on to show you’ve done it properly. If it’s not fully slotted in, TfL will continue to charge you, which at £50 a day can be expensive. Docks are sometimes out of order, so if the light doesn’t come on, try another.

It’s common to find that the docks are full, especially at stations in the evening peak. Pressing ‘No docking point free’ on the touchscreen is your get-out-of-jail-free card, and gives you an extra 15 minutes to find another dock. The screen can also tell you which nearby docks have spaces. 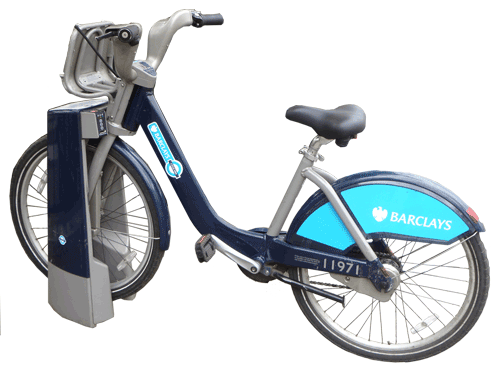 The practical, robust bikes are based on a similar scheme from Canada (‘Bixi’). What they may lack in speed, they make up for in stability, making them particularly practical in crammed central London streets. They have full mudguards, a half-basket to carry your bags, a kickstand, a bell, and dynamo lights which come on automatically.

Before undocking a bike, give the back wheel a spin to check it’s moving freely. If the brakes rub, move onto the next.

Then before pedalling off, adjust the saddle to your preferred height – it’s pretty easy to do, but beware that saddles can and do sink as you cycle along. Tightening the little nut should fix this.

Each bike has three gears, operated by twisting the right handlebar. They’re hub gears, so stop pedalling while you change. If you’re finding it hard going, check you’re in the lowest gear. If the bike’s still faulty, you can swap for another (in the opening minutes of your journey only) by docking it and pressing the ‘fault’ button.

There’s no timer on the bikes, so keep an eye on your watch in case you break the 30-minute limit.

The scheme mostly covers central London, as far north as Camden and south into Vauxhall. In the west, there are docking stations in Kensington and Shepherd’s Bush; in the east, Bow and the Isle of Dogs are the limit.

Do check before going further afield that there are docks in the area. We show docking stations on cycle.travel’s maps, and each terminal has a map, too. If you have a smartphone, there are several Boris Bike apps available which include maps and show you live availability.

The scheme is expanding into Wandsworth and Hammersmith & Fulham in winter 2013/spring 2014. Electric hire bikes are to be trialled in Muswell Hill, too.

By far the most complicated thing about Boris Bikes is the payment system. Once you’ve sussed that, everything else is easy.

You want a key. They only cost £3 and save a lot of hassle at the docking station. Register online to get one – you’ll need your credit/debit card details.

After that, your card will be automatically charged on each day you hire a bike. If you use the bikes often, then switch to the annual fee of £90 – it saves you money even if you only use them four days a month.

You can have up to four keys per account. This is handy for sharing among the family, but bear in mind that each key is charged separately: use two keys on one day, and you’ll be charged two access fees. (You can choose annual, monthly or daily charging for each key, so you could have your own annual key for the regular commute, and a spare daily key for when your partner joins you at weekends.)