Edinburgh lorry drivers get on their bike 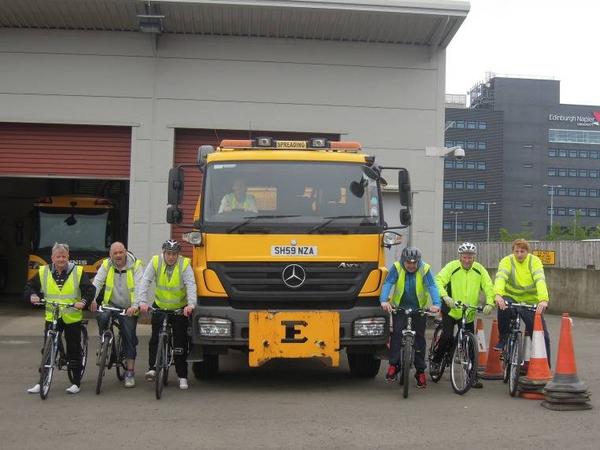 In the first course of its kind in Scotland, employees swapped six wheels for two in an effort to understand the perceptions of cyclists using the city’s roads. The pilot initiative consists of theory and practical sessions, created to encourage drivers to “empathise” with vulnerable road users and the safety issues they experience.

Edinburgh Council says that, by placing drivers in the same position as cyclists, they will gain a better appreciation of the dangers they face on a day-to-day basis.

The training targeted employees in the Council’s transport department who drive vans and lorries and perform tasks like roads maintenance and repairs. Participants returned to the classroom to learn about vulnerable road users, including pedestrians, motorcyclists and scooter riders as well as cyclists, and how best to share the space with them. Drivers were also given tips on how to prepare for journeys, and on the safety devices fitted to their vehicles.

Then after that, the lorry drivers were taken out onto the road to develop their own cycling skills. By learning basic on-road cycling skills, carrying out bicycle safety checks and negotiating road junctions and traffic, drivers will develop a better understanding of road use from a cyclist’s point of view. Transport Convener Lesley Hinds said:

“The Council is committed to promoting cycling as a primary mode of transport, and as such we have pledged to invest 7% of our transport budget into developing cycling infrastructure throughout the city. But if we are to encourage cycling among our citizens we must ensure that they are given a safe and accessible environment in which to do it. By raising awareness of this with our drivers we are leading the way to creating an equal relationship between drivers, cyclists, pedestrians and other road users alike.”

The course is now being proposed to form a core part of City of Edinburgh Council’s driver training. It could also be offered to private sector lorry drivers.

Cycle safety campaigner Ian McNicoll, who has worked with his wife Lynne to raise awareness of the vulnerability of cyclists on the road since losing his son Andrew in a cycling incident with a HGV, welcomed the pilot:

“This is incredibly important. It’s essential that HGV drivers are given appropriate training and know the risks that cyclists take on the roads. While the majority of HGV drivers are good drivers, the number of incidents involving HGVs and cyclists continues to be very high. We’re pleased that the Council is taking this into account with the initiative, and look forward to seeing how the course progresses.”