I grew up in Cornwall and never had the inkling that I would ever spend my future summer holidays on two wheels revisiting old haunts. Anyway now back as a parent managed to escape the odd days away from the young children. I took an adventure bike (Specialized Diverge) which was a perfect bike for these roads as the terrain is so variable. I downloaded the GPX route onto my mobile phone using the app OsmAnd which is important as it is quite easy to get lost if you lose concentration and to verify the small sign with the arrow to some overgrown footpath is for you. There was a couple of times where a new housing estate has obliterated the path and a detour was required.

Started in Mousehole as we had visited the Minack theatre in the morning, a magical open air theatre on the cliff tops, but was put off the small country roads by double Decker buses fighting with campervans between the narrow Cornish hedges. Throughout the ride the nervousness along these roads never quite left me but one got used to it, providing that the brakes work and the drivers coming round the corners are also as nervous as you. I wouldn't recommend taking children as drivers on these roads are just not careful enough for peace of mind. 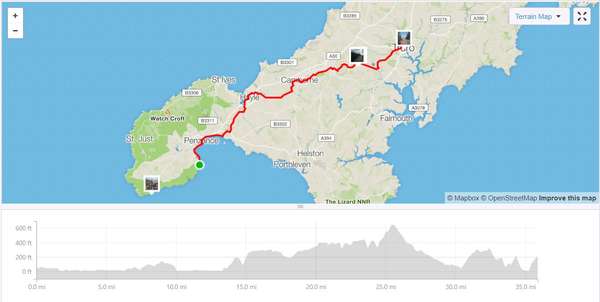 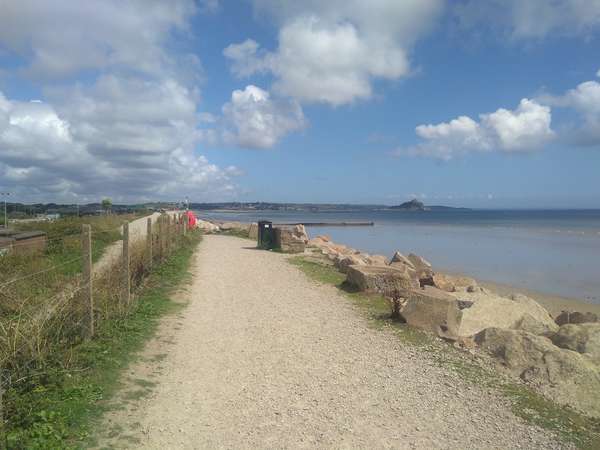 Route from Mousehole to St Michael's Mount was initially on the road then there was some searching for the entrance before travelling along a long off road gravel path hugging the beautiful coastline. My adventure/gravel bike was great fun on it but a hybrid or road bike would be too painful. At the end of that one turns inland to a series of small quiet Cornish hedgerow roads (note caution above) and head towards Hayle. Again the beauty and openness of the Hayle estuary showed Cornwall at its best. There was a bit of fumbling around and avoiding pedestrians or traffic whenever the route takes you through a town but it was manageable.

Hayle to Cambourne and Redruth was where the hard work started with several climbs and drops, all along quiet-ish hedge roads. There were several off road sections along the old tin mines descending quite steeply into narrow muddy footpaths. That definitely need a mountain or adventure bike with good brakes. 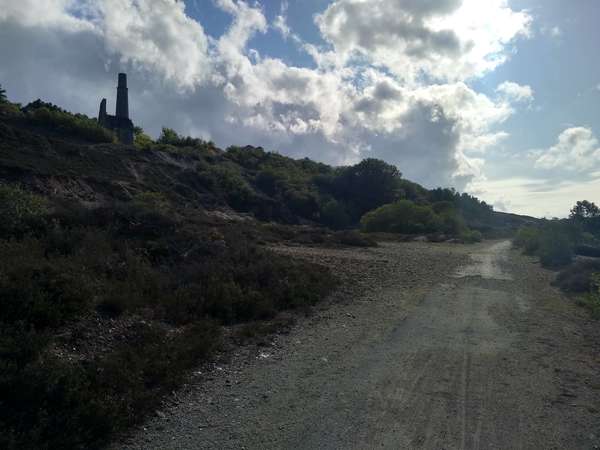 Then again some up and downs in narrow hedgerows before heading into Truro and the end of my journey. Really enjoyed the ride as I saw the the proper towns and villages of Cornwall as well as the beautiful rugged history.

Advise anyone to try it - not for the beginner as you will be put off touring. Importantly you will need a good bike that can handle rough gravel muddy paths for which there are some.

Thanks for taking the time to produce this great resource, but I have to question the inclusion of this hideous route I’ve ridden in many countries, usually in the mountains,  and never felt the need to comment on a route, until now. This is the worst route I have ever ridden on a bike! Seriously, it is just terrible and a disgrace that it has been published as a showcase for the county. I expect hills here, but the route takes the worst possible lanes with terrible surfaces, and endless blind bends so it is an exercise in destroying brake pads. It was so bad I preferred to detour on busier roads when this was possible.

Inland from the coast, Cornwall is austere at best, so why this route goes through some depressing towns like Truro, Camborne, Redruth, etc, and ignores ice of the nice coastal settlements is unfathomable.

I would probably not ride in Cornwall again after this, and certainly not on the awful NCN trails.