My plan was to catch the train to Fishguard from Bridgend after work one Friday and cycle back to Bridgend in time for tea on Sunday. I booked a train ticket weeks in advance and ended up taking the day off work because of my poor organisation and logistics. Fully embracing the touring ethos, I embarked from home in a t-shirt, shorts and sandals; not even a whiff of Lycra!  I cycled in to the station in plenty of time, but the train was delayed 10 minutes, then 20 minutes etc... I eventually got in to Goodwick at 19:55; almost an hour late! 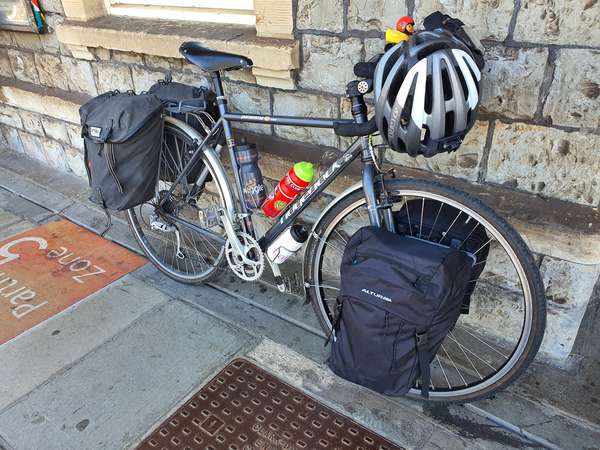 The evening cycle was a pleasant one as I cycled up the hill from Goodwick in to Fishguard. From here you're straight in to the countryside and the lanes. I could probably count on one hand the number of cars I passed! The lanes are surfaced nicely and the route is pretty well signed although there are one or two junctions where I was left guessing (I hadn't downloaded the route to my bike computer; did I mention that organising wasn't my strong point!). There's a fair bit of climbing along this route but the altimeter on my watch is broken so I can't say how much. The road takes you out to Rosebush Reservoir which is supposed to be lovely spot for a swim. I was planning to stop for a quick dip here but with the late train and the slower going on the hills than expected meant that I was running out of daylight. My original plan was to hammock in a wood further up the road in the Preseli Hills and I wanted to get there with enough light to set up camp. I carried on for a few more km but it was soon obvious that I wasn't going to make the woods so I found a nice field with no crops, no animals, just grass, a few cowpats and thistles which I thought would be a nice spot to pitch up for the night. I set up my tarp, cooked some food in the dark and slept soundly. 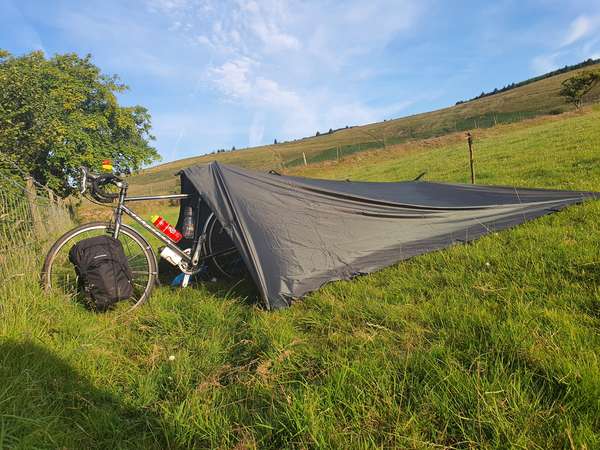 I was up and riding again by 8am the next morning. The sun was out and the day was warming up lovely, it was going to be another hot one. It just so happened that I had booked my train tickets for the hottest days the UK has seen since it was a volcano riddled tropical forest. With weather warnings for everyone to stay inside with the windows open and the curtain closed, I was setting off on my first fully loaded cycle adventure. I found a lovely spot by a stream on top of the moors and stopped for a cuppa. This is a very remote part of the world soI hadn't managed to fill up my bottles from the night before; I had to be sparing with my water until I reached Crymych to resupply which is the only pace with a shop I passed along the whole route. At this point I added a Millbank Bag to my wish list. 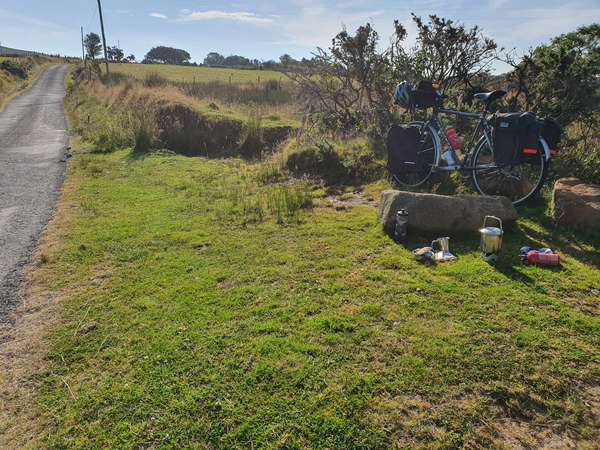 The first hour or so in the morning was relatively easy going and the views over Pembrokeshire were superb. The going soon got a lot harder. The guide book describes this part of the Celtic Trail as "relentlessly undulating". I would describe it as BRUTAL! I pushed my bike up more hills that day than I have done before! At some points any on looker would have thought me practicing for a scum down rather than simply pushing a bike. It was on one such incline that I stopped to talk to a local who informed me that I was on the last hill before Carmarthen. I'm sure he let out a sneaky chuckle as he said it was only another mile and a half to the top 😂.

Six hours after setting off, I entered Carmarthen where I searched out the Tafarn y Tanerdy, a recommendation from the same local I had talked to earlier. It's a lovely Brains Pub just on the left off the road leading into Carmarthen, where the food was good and the beer better; all very refreshing. I still had about 20km left to reach my second intended camp site; another wood just outside Crosshands. After refuelling and cooling down I decided enough was enough so I cycled the last few remaining km in to Carmarthen and caught a train home. Weekends like these don't come often in the UK so a little cycling adventure followed by a day of family beach time seemed like the perfectly balance weekend.

I'm not new to cycling and have tucked away a fair few miles over the years however this was my first fully loaded, self sufficient cycle adventure and I learnt a very special lesson.... A fully loaded steel frame touring bike is no Trek Madone... It's slower; a lot slower! Something I'll take into account when planning my next trip.