Among my bad habits is looking at lines on the map, thinking “that looks like it might be cyclable”, and heading off to find out. When last year we took a week’s cottage holiday in Rhayader, mid-Wales, there was one line that immediately sprang to mind: the track past the Claerwen Reservoirs.

It was November, but one of those beautifully crisp, clear autumn days that remind you that there’s no finer place to be than on a bike. And the route was pretty special from the off, heading slowly uphill out of Rhayader. The cycleway (part of NCN 81, Lon Cambria) was built on the track of the construction railway for the Elan Valley Reservoirs. It’s a stunning ride all the way to the watershed and then down into Aberystwyth – but I wasn’t going that way. 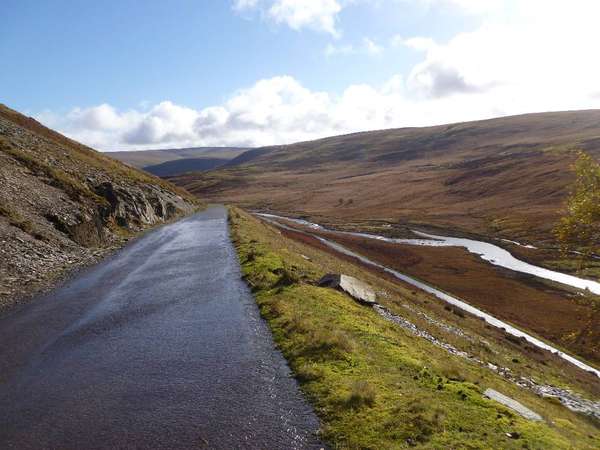 Instead, I turned onto an even quieter road, signposted simply ‘Claerwen’ with a blue T sign to suggest a dead-end road. A dead end for cars, maybe, but not for bikes.

The road gives out at the start of the Claerwen Reservoir, becoming a gravel track. It’s clearly used by farm and estate vehicles, but a TRO (Traffic Regulation Order) has supposedly put paid to its usage by leisure 4x4ers and trail-bikers. I say “supposedly” because a couple of trail-bikers passed me going the other way. I’m pretty sure they weren’t meant to be there but… 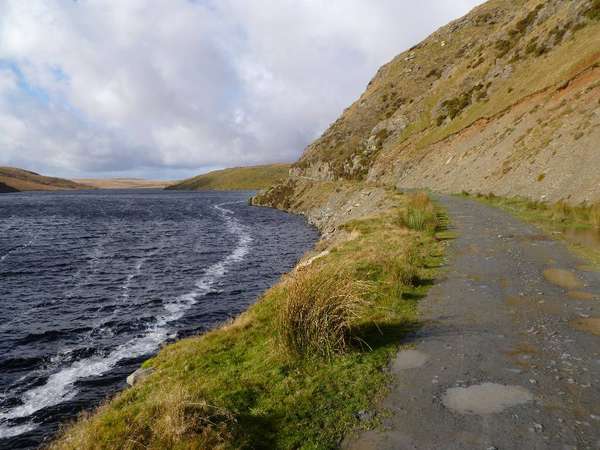 …can you blame them?

The track was perfect for the Croix de Fer: bumpy, potholed and full of puddles, but firm and never muddy. A mountain bike would take it in its stride. It was hard work, I’m not going to pretend otherwise. But the knowledge that (trail-bikers aside) no-one else was seeing this glorious scenery on such a perfect autumn day… that’s something special.

The biggest challenge was this: 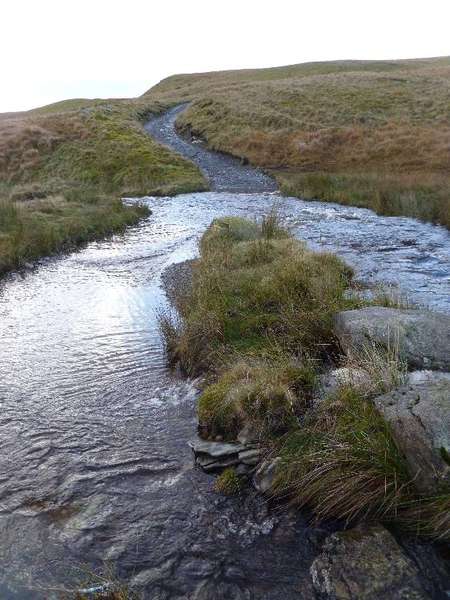 Ah. I hadn’t spotted that on the OS map. Still, it was wadeable.

A couple of miles on, the track became a tarmac road again at the Teifi Pools. For some unexplained reason, there was a lonely NCN 82 sign here, though this certainly isn’t part of the NCN. 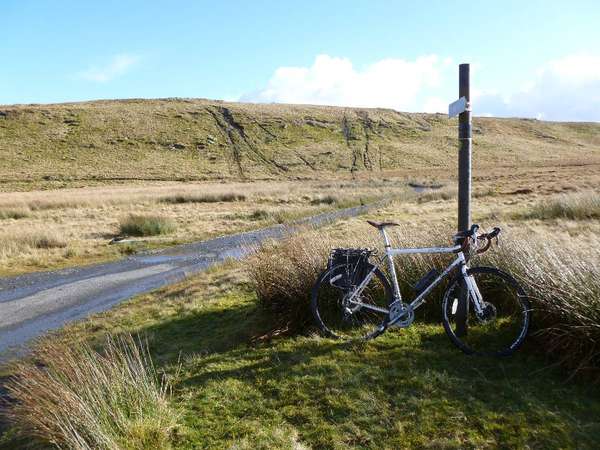 But… perhaps it should be: the road from here down to Ffair Rhos was simply superb cycling. Unexplained humps and bumps gave it the feel of a lost land of Middle Earth. There aren’t many places in Britain where you can experience the wilderness with the comfort of tarmac under your wheels, but this is one. 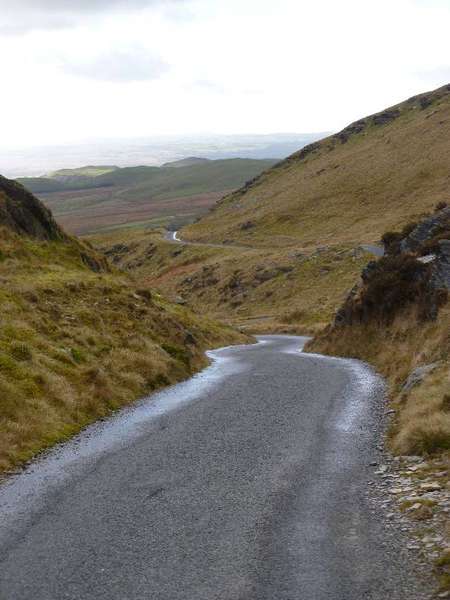 (Though on the descent from the moorland, the alpaca farm seemed a little incongruous for rural Wales…)

I resisted the temptation to stop at the isolated, inviting Tafarn Cross Inn, and carried on to meet NCN 82 proper at Ystrad Meurig. An old railway track begins here across a wetland nature reserve, and the hides were busy with bird-watchers scouring the land and skies.

At the end of this, NCN 82 gives out onto a B road which it follows through Tregaron to Lampeter. This being rural Wales, it’s not exactly heaving cars, but still – the road’s a little wider, the traffic a little faster, than the NCN usually is. Tregaron is a pretty, tiny little town with a trade in tourist gold, a useful Spar for an afternoon snack, and best of all, a chemists which sold me some new, dry socks. 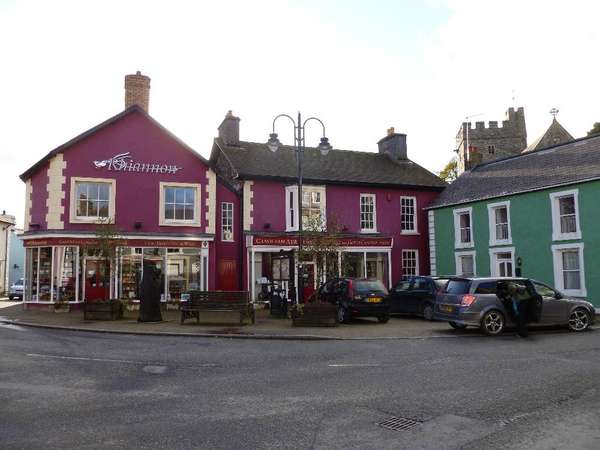 At Llandewi Brefi (yes, it really exists) you can make the usual jokes about “the only cyclist in the village” etc. I was briefly tempted by a sign promising ‘Mountain Road’: 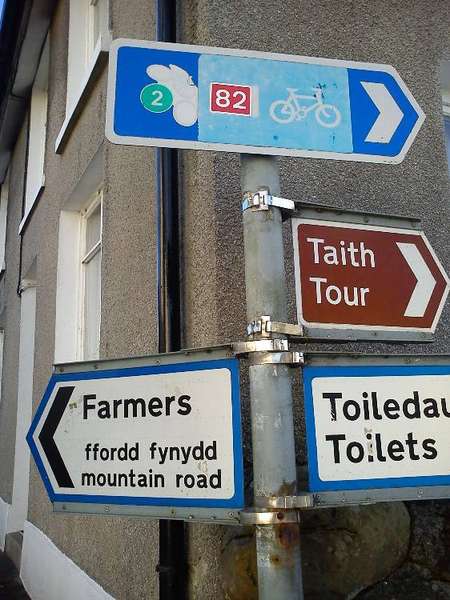 A quick browse on Geograph suggests that this route could be every bit as dramatic… and there’s an independent youth hostel halfway along at Ty’n cornel. But I’d done enough rough stuff for one day. Next time!

Instead, I continued along NCN 82 which still follows the B road, even though there’s a smaller road on the other side of the valley. The most curious piece of routing, though, is in Lampeter, where the signs send you past car parks on a back-street route which entirely misses the town centre. I don’t often quibble with NCN routing decisions, but this one seems wrong.

It was pleasant enough, but rarely dramatic, from here to Llanybyther on a short undulating section which gives out to another B road. After Rhyddlan, though, the countryside began to feel remote again, as the road twisted and turned on the steep north side of the Teifi valley. By now the light was fading fast: 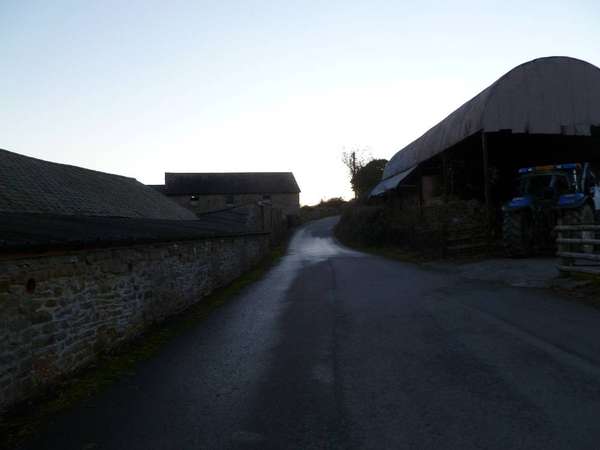 But even in the twilight, the last few miles were highly enjoyable, along shadowy lanes with sudden climbs followed by swoops down to the valley floor.

My lift back to Rhayader was waiting at Llandysul. The bike ride had been 54 miles; it was 64 slow miles back by car, and felt longer. But the glorious ride across from Rhayader to Ffair Rhos was worth it.