The Hydro-Electric Tour Day 3 of 4

Despite a pretty rough night of very strong winds and heavy rain, Mike's new tent held up well and we remained warm and dry. However, breakfast and packing up was quite a breezy and damp affair, as showers continued to sweep in on the strong South Westerly wind. 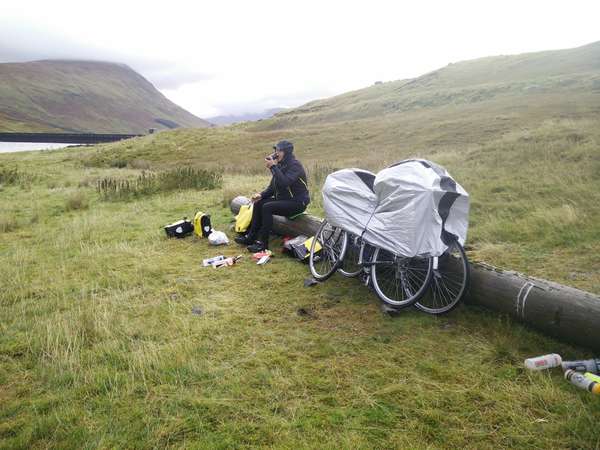 After re-negotiating the rough track and locked gate, we climbed up the unclassified road to the high point of the day and the highest point of the tour, the Learg nan Lunn at an altitude of 1660' (505m). The climbing was accompanied by rain and a swirling wind, so pretty unpleasant, however not long after cresting the summit the wind changed direction and was at our backs on the long descent (900') into Glen Lochay.

The final part of the descent was very steep with 4 hairpins and the condition of the road was poor, it had deep potholes and lots of loose gravel, so extreme caution was required; there were also two large deer gates complete with cattle grids which proved quite tricky to negotiate. Once into the valley bottom, we descended quickly down the Glen on a relatively smooth road; just after the road crossed over a large pipeline, we took the right hand fork which lead us past our fifth power station (Lochay) and on to meet the A827 just outside Killin. The Falls of Dochart were in full flow as we crossed the Bridge and we treated ourselves to a pleasant lunch in The Falls of Dochart Inn. 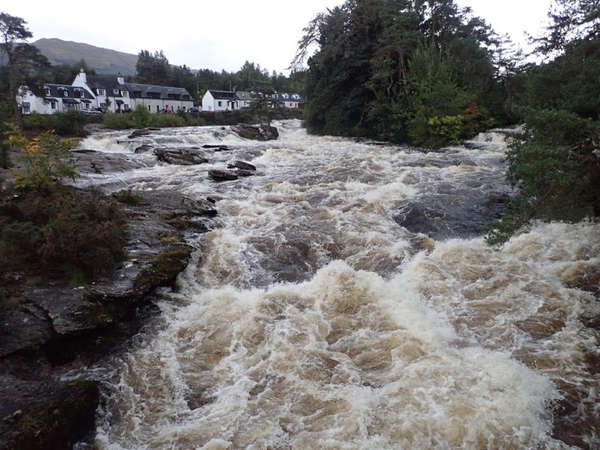 After meeting up with NCN Route 7, right next to the pub! we followed it all the way along the Southern shores of Loch Tay to Kenmore; the route is fairly undulating with a couple of stiff and fairly long climbs. From Kenmore we continued along Route 7 and followed it all the way to Weem, where we parted company and followed the B846 into Aberfeldy and our campsite for the night at Aberfeldy Caravan Park. This is a big and popular site with level pitches and good facilities so expect it to be busy during the peak season and weekends, but as we arrived late on a Sunday in mid September it was relatively quiet - so no queues for the hot showers or the pot washing sinks.