This route came about after a friend wanted to do the Pennine Cycleway but the logistics of getting both of us and our bikes to the start and then home from the finish using trains, when we both live in completely different parts of the UK proved to be an absolute nightmare. So we decided to do part of the Pennine Cycleway starting it at Foulridge and following it up to Hadrian's Wall, where we would then turn South and do a route through the Northern Pennines and Dales back down to Keighley, this would allow us to start from our friend's farm in Newsholme just outside Keighley.

The journey would be 285 miles and we planned to do it over 7 days, with 5 nights camping and one night in a bunkhouse. Because of Covid and various other issues, we weren't able to start the journey until the very end of September 2021.

My friend Suggy and I would complete the whole journey and our friend Mike would join us for the first 3 days up to Hadrian's Wall, he would then head to Carlisle and a train home, while we turned South to complete the route.

Day 1 Newsholme to Thornton In Lonsdale

On the day we set off from Newsholme the rain was falling heavily and there was a strong and gusty SW wind, so it was full foul weather gear and a very wet headwind for most of our ride over "The Herders" to Foulridge where we connected with Route 68.

After coffee and cake at The Wharf at Foulridge we headed off along a rather wet  Leeds and Liverpool canal towpath and then relatively flat minor roads to Gargrave, where we stopped for lunch at Suggy's mum's house. 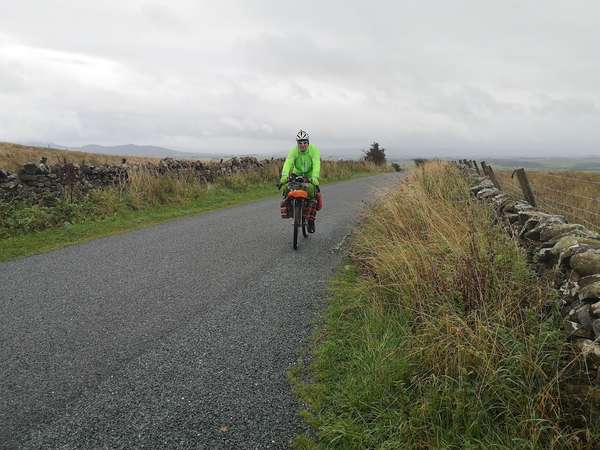 Leaving Gargrave in the rain, we followed Route 68 and headed to Airton where we climbed over Scosthrop Moor and dropped down into Settle, the descent into Settle is very steep and narrow, so caution is needed, particularly if you are on a heavily laden bike. From Settle the route takes a minor road on the West side of the River Ribble climbing towards the hamlet of Little Stainforth and then heading over to the village of Austwick. From Austwick the route skirts the busy A65 on a separate cycle path before passing through Clapham and climbing steeply towards Newby Cote and onwards to Ingleton and ultimately to our campsite for the night - Meadow Falls Camping and Caravanning at Thornton in Lonsdale, where the owner took pity on 3 rather wet looking cyclists and offered us the use of a camping pod for a small additional fee, which we duly accepted. 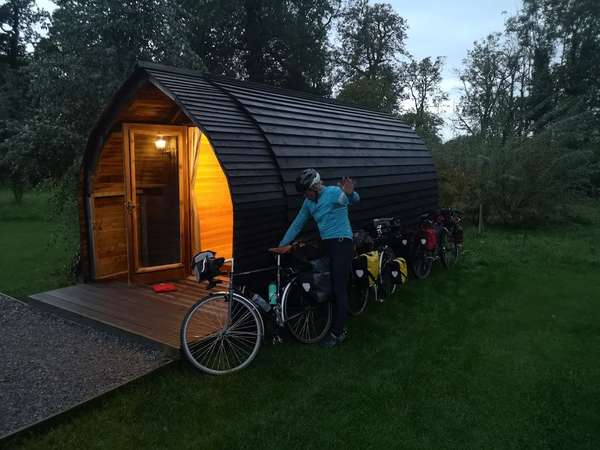 With no tents to put up, showers were taken, damp clothes replaced with dry and our evening meal of curry, rice and naan bread was prepared and eaten in quick time so we could manage a couple of pints in the nearby Marton Arms.