A four-day, 270-mile, 5000m route round North Wales, combining the northern parts of the Border Raid and Lon Las Cymru with the North Wales Cycleway and a short stretch of Lon Cambria.

By car to Welshpool, parking near the tourist information. North out of town on the Border Raid route through rolling country in 35-degree temperatures, pacing it for the heat. First stop at Abertridwr, where the local shop supplied fresh cold water and Cornettoes, and the lady owner was charming, chatty and slightly concerned about our mental state given the heat. Up to Lake Vyrynwy and across the dam, coffees at the café at Lanwyddyn. The scenic road along the west side of the lake, mingling with day cyclists who had hired from the café. At the north end of the lake they turned south along the east side, we carried on up to the Bwch Y Groes, a cycling highlight of the trip, quiet climb to the summit, fast descent along the scree-backed road. On to Bala, where all the cafes were closed because the heat was too much for the chefs, and the Co-Op had sold out of bottled water. We topped up bidons with ice, ate Co-Op Sushi boxes for lunch, and headed north again. The initial A-road stretch was a bit wearying, but at Y Frongoch it turns into a good B-road pass, over to Dinmael and a last steep stage at Melin Y Wig (where a friendly farmer’s wife provided much needed top-ups as we were dry), and then to Clawddnewydd for the pub/community shop for lime and sodas and a further top up. Then down quiet lanes to Ruthin and the Castle Hotel (a Wetherspoons on the main square, and the social hub of Ruthin on a hot Friday night). At least seven litres of water drunk per man on what was one of the hottest days of the year, and few options other than farmers’ charity between Bala and Ruthin. 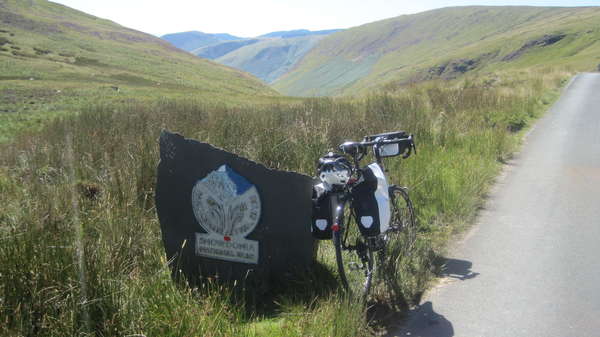 Day 2 fast lanes to Denbigh and St Asaph, hitting the first of the castles at Rhuddlan, and then the coast at Rhyl, where we joined the North Wales Cycleway. Along the coastal cycle path all the way to Penrhyn Bay, where the Beach Bar and Café provided lunch and “the full shazam” (jam, cream, butter and warm home-made scones). Along to Llandudno and we took the optional and beautiful Marine Road route around Great Orme, hot and hazy, with the Irish Sea looking uncharacteristically Mediterranean. Back on the main route, stay on the road between Llandudno and Conwy, as the beach path option has been completely eroded away, and is now just beach. Across the bridges at Conwy (second castle) and west on the cycle path again, varied by the weird switchbacks and cycle-flyovers which keep it clear of (and even above) the A55, and then onto lovely cycling lanes from Llanfairfechan below the Carneddau, taking us into Bangor under the watchful Victorian towers of Penrhyn and into the Eryl Mor Hotel (bikes into the beer cellar) for great showers, a good dinner, and some well-earned cold beers watching the tide run out from Menai. 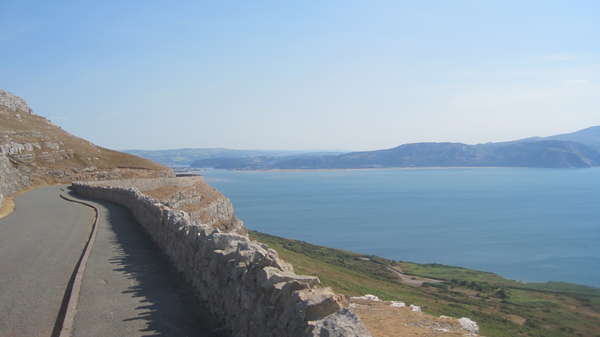 Day 3 a quiet early morning through university Bangor, then onto cycle paths, joining Lon Las Cymru to Caernarfon (Castle 3), and across the foot of the Llyn Peninsula. Strangely slow going on the paths, surface, slope or heat making it hard to cruise at more than 13 mph. So a coffee and cake stop in Pen y Groes, where Café Ceri (and the eponymous owner) proved a super stop in an otherwise Sunday-sleepy North Welsh town, just off the main route, also well-placed on a corner of the Brailsford Way, coffee, cakes and fresh water. On to Criccieth for lunch, then a circuitous route with fabulous views of Snowdon down to Porthmadog, Behind Harlech (Castle 4) a murderous climb up from sea level (a car ahead abandoned with a burnt out clutch), followed by a long drag and another steep ascent to the highest point, where a father and son with a camper van watching the view shimmer handed out a couple of ice cold beers, before we zoomed down to Llanbedr and raced along the A-Road to Barmouth. Sadly, Barmouth on the hottest Sunday of the year was a scrum, with the roads gridlocked and the pavements likewise. A quick stop for fluids, then across the amazing railway wooden bridge (be warned, the planks on the pathway are not nailed down!), to join the exquisite gravel-pathed railway line all the way to Dolgellau. Into town too late on a Sunday for a sit-down meal so a couple of beers at the Royal Ship, and then recourse to the ever-reliable Chinese Restaurant on Smithfield St. for street food before overnighting at the very friendly Ivy House B&B, with space for bikes in the cellar. 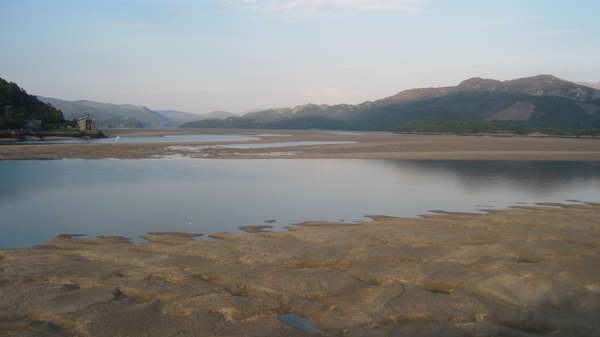 Day 4 a fine breakfast, then out of town to the South and immediately climbing over the eastern end of Cader, on gradually smaller and smaller roads until a paved (and sheep-poo-littered) track took us to cross the A487, then back onto a small farm road with gates, climbing steadily all the way with fabulous views back down to Snowdon and the “Mach Loop”. Down to Aberllefenni, Corris and ultimately Machynlleth, where the pillars for the new road bridge looked like a Welsh Luxor standing in a field. Coffees at Glyndwr’s Parliament House, and then the Mountain Road. Steady climbing for most of the way, then a long hard pull to the summit, eight miles in total. Reward is dropping down on the south side through lovely, quiet fields, woods and valleys to Llanidloes for lunch at the Great Oak Café. Onto Lon Cambria east to Newtown through some rolling hills, and then fifteen miles of narrow canal path to Welshpool to finish. 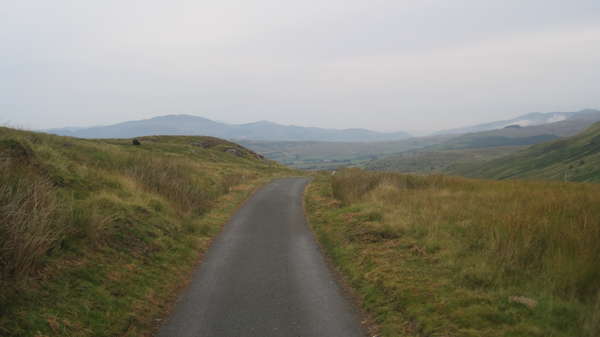 What a ride. I know most of those bits from shorter rides but what a thrill to do it all together in such fabulous weather. Would normally be wringing out my socks and cursing the wind. Thanks for pulling it all together into a cohesive loop, well done.