Bridgewater to Taunton. Towpath upgraded as part of NCN 3, though can be a bit puddly in places. In a couple of sections the cycle route follows parallel quiet roads instead.

Brentford to Birmingham. One of Britain’s longest canals and variable in quality! Rideable in London, particularly the Paddington Branch (Uxbridge to Paddington), part of which is currently being upgraded. North of Rickmansworth the canal is usually rural with an unimproved towpath. Leighton Buzzard to Milton Keynes is a rare well surfaced section (NCN 6). Within Birmingham the towpath is newly upgraded for cycling. Generally, though, this is a bumpy towpath and not suitable as a long-distance route from London to Birmingham.

Reading to Bath. Excellent cycle route, part of NCN route 4. Eastern and western ends have a firm surface. Central section (Newbury to Devizes) is unsurfaced and NCN 4 follows quiet lanes instead, though MTBs could continue on the towpath. Western section from Devizes to Bath is exceptionally picturesque. Connects with the Bristol–Bath railway path and with the Two Tunnels route in Bath. See our full guide.

London to Hertford. High-quality compacted (or occasionally paved) surface. Part of NCN 1 and NCN 61, though these occasionally duck off onto quiet roads or other paths. 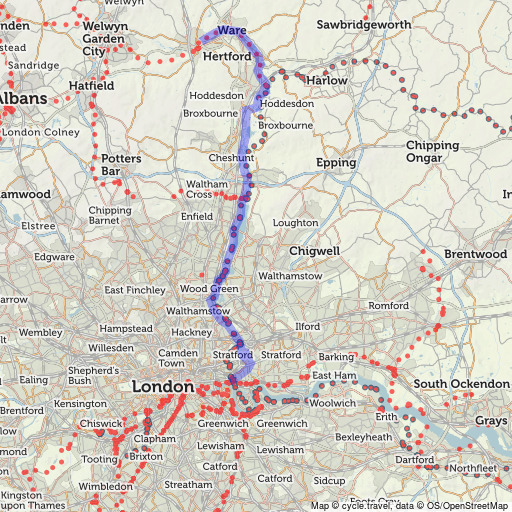 Rochester to Tonbridge. No cyclable towpath. (Run by the Environment Agency.)

Oxford to Coventry. Generally unsurfaced singletrack, not suitable for cycling. Good quality within Oxford city. Banbury–Cropredy is also regularly ridden although can be rough.

London Paddington to Limehouse. Without doubt, Britain’s most popular cycling canal. Entirely paved. Can be very busy with cyclists as well as walkers and sight-seers: certainly not a fast route. Some short sections are closed to cyclists and an alternative route is signposted. 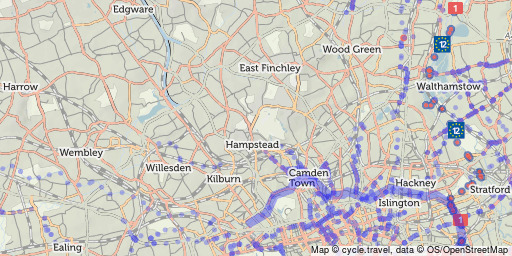 Hoddesdon to Bishop’s Stortford. Tributary of the River Lee. Mostly an unimproved, unsurfaced towpath but in good enough condition for hybrid bikes and similar.

London to Reading, Oxford and Lechlade. Thames Path generally not suitable (or legal) for cycling, but there are some good sections from central London as far west at Staines/Egham. Also surfaced and regularly cycled within Reading and Oxford. NCN routes 4 and 5, aka Sustrans’ Thames Valley route, roughly parallel the river as far as Oxford. (Run by the Environment Agency.)