West Stockwith, near Gainsborough, to Worksop and Chesterfield. Unimproved grassy footpath from the Trent to Worksop, except within Retford. Resurfaced as NCN 6 for a couple of miles west of Worksop, and then muddy but rideable on a suitable bike up to the old tunnel at Kiveton. On the other side of the collapsed tunnel, parts of the towpath have been upgraded in conjunction with nearby railway paths to form NCN 67, part of the Trans-Pennine Trail.

Long Eaton to Langley Mill, near Nottingham. Suburban canal in D.H. Lawrence contry. Good all-weather surface from Long Eaton to the edge of Ilkeston as part of NCN 67, which then heads west via the long-lost Nutbrook Canal. The Erewash continues from Ilkeston to Langley Mill with an unpaved but firm enough surface, popular with local cyclists. 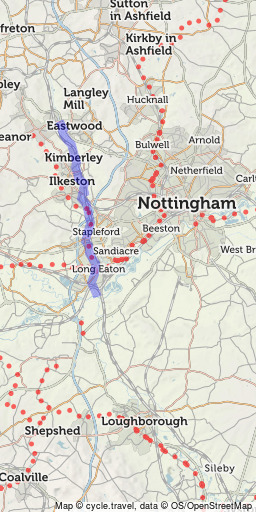 Watford Gap to Leicester. Very rural towpath, not suitable for cycling apart from the branch into Market Harborough, and within Leicester city centre.

Nottingham to Grantham. Derelict canal slowly being restored to navigation. Good quality compacted surface from the edge of Nottingham – though the line in Nottingham city centre is lost – past Cotgrave to Harby. It then becomes a grassy footpath until near Bottesford, where the surface improves as part of NCN 15 into Grantham.

Rambling network of rivers and lakes (‘broads’). Generally no cyclable towpaths but there are plenty of enjoyable country lanes in the area. (Run by the Broads Authority.)

Cambridge towards Ely. Very popular for cycling within Cambridge (downstream from Jesus Green) and out to Waterbeach. Not rideable north of there. The connection from Waterbeach to NCN 11 at Lode, and from there to Ely, is sadly still missing. (Run by the Conservators of the River Cam and Environment Agency.)

King’s Lynn to Ely and Bedford. No consistent cyclable path though sometimes minor roads run along its banks. Short cycleways for a short way south of King’s Lynn, again south of Ely, and in Bedford town centre. Good NCN routes on quiet roads and railway paths in the area. (Run by the Environment Agency.)

Leicester to Nottingham. Now resurfaced and improved from Leicester as far north as Syston/Cossington. Also cyclable on the canal section within Loughborough. Otherwise a rural river with no opportunity for cycling. 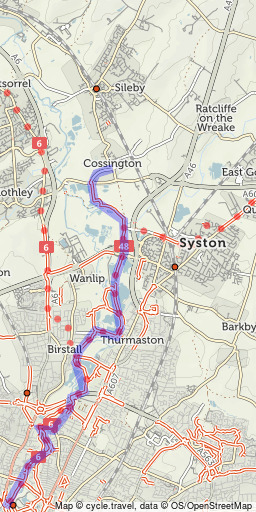 Nottingham to Gainsborough and the Humber. Rideable from Trent Lock and Long Eaton to Nottingham along the ‘Big Track’ cycle path. Otherwise, generally no cyclable path but some minor roads run directly along the riverbanks in its lower, tidal reach.

Market Deeping to Spalding and the Wash. No consistent towpath, but nearby field paths and minor roads along the banks are often cyclable, several as part of NCN 12. Could form part of a very enjoyable ride for those with sturdy bikes! (Run by the Environment Agency.)

Lincoln to Boston. NCN 1 runs alongside on a converted railway trackbed, the ‘Water Rail Way’, and on quiet lanes. The Fossdyke Navigation, a Roman canal, continues west from Lincoln and is cyclable as far as Saxilby.