Nuneaton to Hinckley and Measham area. Rough and jarring on a bike. Not recommended.

Tewkesbury to Stratford. Riverside path not suitable for cycling. (Run by the Avon Navigation Trust.)

Birmingham to Fazeley, near Tamworth. The urban area out as far as Minworth has a good surface and is an interesting ride past locks and under Spaghetti Junction, though may not feel welcoming at night. From Minworth to Fazeley it’s unsurfaced but in reasonably good order.

100-mile network of canals around Birmingham, Wolverhampton and the Black Country (yes, that is more than Venice). Most are very suitable for cycling: some even have towpaths on both sides of the canal. Surfaces are generally compacted, but tarmac is common around the urban centres – particularly Birmingham city centre itself, where many upgrades are taking place. Some of the towpaths in the northern Black Country (particularly the Tame Valley Canal) can be rougher. The 1.7-mile Netherton Tunnel, near Dudley, has a cyclable towpath for the brave!

Stoke-on-Trent to Leek, Caldon and the Peak District. Recently upgraded for cycling as far as Cheddleton and Leek, signposted as NCN 550 and 559. (The final section from Cheddleton to Froghall hasn’t been upgraded, but NCN 550 follows broadly parallel quiet lanes.) One of Britain’s loveliest canals, and a very enjoyable cycle route from Stoke to the Peak District. 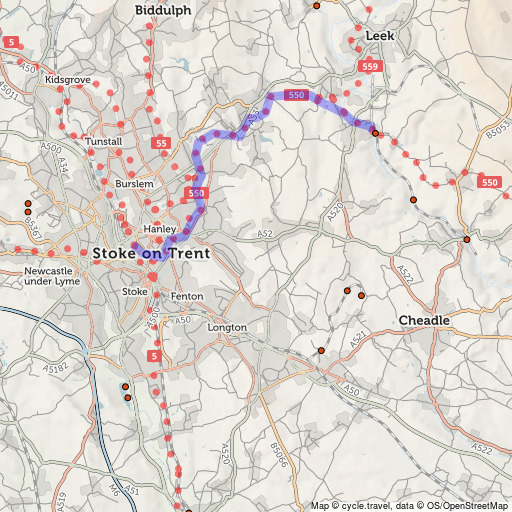 Coventry to Fradley, near Lichfield. Good quality surface from Nuneaton to Coventry, and around Tamworth. Otherwise a rural unsurfaced towpath.

West of Droitwich, the canal (the Barge Canal) is unsurfaced and generally not suitable for cycling. Droitwich town centre is fine, and so is much of the restored Junction Canal east of Droitwich. NCN 45 and 46 run close by.

Hurleston, near Nantwich, to Llangollen. Very popular holiday boating canal. Mostly unimproved singletrack towpath. Chirk to Trevor and Llangollen has been resurfaced as part of NCN 84/85 and is a superb ride, not least thanks to the famous Pontcysyllte Aqueduct (do dismount!). 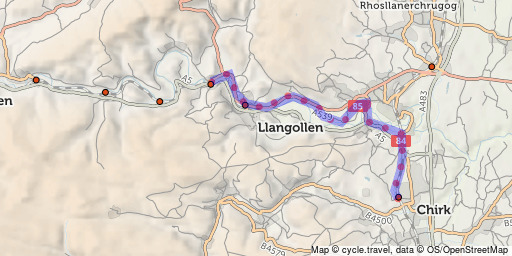 Newport to Brecon. Towpath gradually being upgraded to cycleway standard. From Newport to Cwmbran, the canal is partly derelict but the towpath generally good. The boats begin at Cwmbran from where it continues as a firm though unpaved surface to Govilon, near Abergavenny. From here to the outskirts of Brecon it’s mostly unimproved, but nonetheless very popular with cyclists on hybrids and MTBs. There’s a parallel quiet B-road as an alternative. The quality surface resumes at Brynich Lock for the last two miles to Brecon. 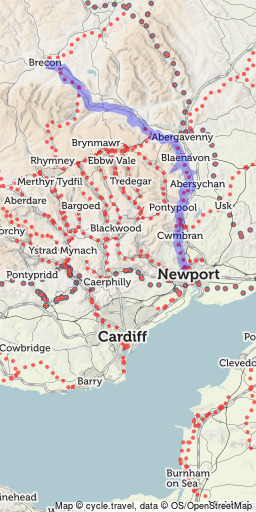 Frankton, near Oswestry, to Newtown. Effectively a branch of the Llangollen Canal, closed for many years but being restored. From Newtown to Welshpool it’s been improved as part of NCN 81 (Lon Cambria) and is very rideable. North of Welshpool is a work in progress, with several sections still awaiting upgrade. 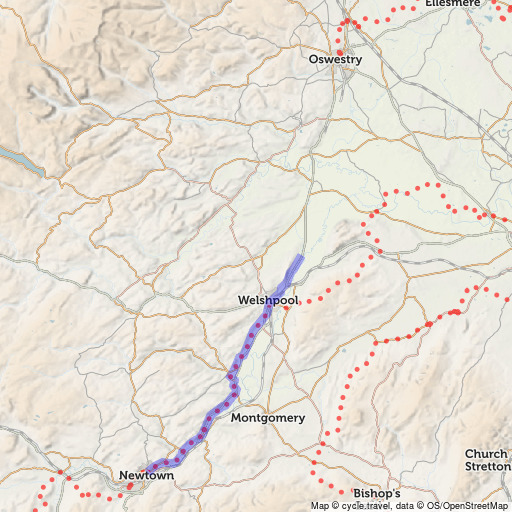 Welsh mountains to Bristol Channel (boats from Stourport to Gloucester). Not suitable for cycling other than within Shrewsbury and Worcester centres.

Wolverhampton to Chester and Ellesmere Port. Very rural canal with deep cuttings, where water drains onto the towpath making it a quagmire, generally this is only suitable for MTBs. There’s a path parallel to the canal near Wolverhampton, and the towpath is fine around Nantwich. Chester to Ellesmere Port is well surfaced and part of NCN 5.

Stourport to Wolverhampton and Great Haywood, near Stafford. Good towpath from Stourport through Kidderminster to Kinver (NCN 54); bumpier but rideable from there on to Stourton. Good quality in the Wolverhampton suburbs from Compton to Pendeford/Oxley. Otherwise largely unimproved rough singletrack.

Stourbridge to Stourton. Canal from the southern Black Country to Stourton on the Staffs & Worcs. Urban sections are good for cycling; rural section largely unimproved.

Stratford to Birmingham. Stratford to Wilmcote surfaced as part of NCN 5. Otherwise southern section is unimproved singletrack and not easily rideable. Better surface closer to Birmingham, particularly along the very pretty Lapworth flight of locks, and within the city limits the towpath is being resurfaced for cycling use.

Shardlow near Derby to Burton, Stoke-on-Trent, Northwich and Runcorn. Long cross-country canal. Most sections are unsurfaced singletrack but rideable with care. Stone to Stoke-on-Trent is part of NCN 5 and well surfaced. The towpath through Stoke has been upgraded as part of the city’s network of canal and railway paths. Rural sections from Northwich to Runcorn are less rideable but NCN 5 runs parallel, partly along the River Weaver towpath.

Worcester to Birmingham. Very rideable in urban Birmingham and Worcester. Rural sections are often too rough to be enjoyable, but the long Tardebigge lock flight (Stoke Prior to Tardebigge village) is well surfaced and pleasant to ride; so too the canal around Alvechurch village. Long tunnel just south of Birmingham (Wast Hill) has no towpath.