Le Havre At the mouth of the Seine, Le Havre is a ferry port of some antiquity, though in 2021, the future of its passenger service is in doubt . Regardless of whether you arrive by ferry or train, you’ll want to head for the Boulevard Winston Churchill: the roadside cycle path is where the V33 cycle route begins.

The scale of the Le Havre port is something to behold. Not so much the town docks which you’ll pass at first, but the vast shipping complex that makes this France’s busiest container port. The result is that you won’t actually see the Seine until Tancarville, 45 (easy) kilometres into the journey. Instead, you follow good-quality cycleways at first, then the old road that has largely been supplanted by the parallel autoroute – still a bit busier than would be ideal, but tolerable.

The suspension bridge at Tancarville is an arresting sight; the port canal rejoins the Seine here. Industry hogs the riverside here, so your acquaintance with the Seine will be brief, but the diversion is worth it for the pleasant town of Lillebonne with its extensive Roman remains.

Alternatively, if you’re approaching from the west (perhaps having taken the ferry to Ouistreham/Caen), you can enjoy the south bank route signposted V33b. This begins at the delightful old port town of Honfleur, without doubt a more attractive setting than Le Havre itself. Continue on quiet roads to Quillebeuf or Jumièges, where there are ferries to the north bank. 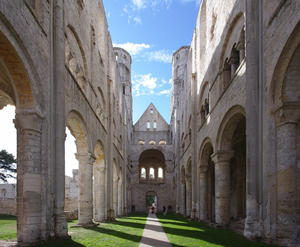 Port Jérôme (43km) At last, after Port Jérôme, the north bank route heads purposefully for the riverside on a tiny road across farmland. It clings to the shore through the pretty river-facing town of Caudebec en Caux. There’s a fascinating river museum here, MuséoSeine. A brand new (2020) railway path, beautifully tarmaced, continues towards the Jumièges meander.

You could cut off the meander and follow the railway path all the way to Duclair, but Jumièges is a must-stop. Once the grandest monastery in all of France, it has been, since the Revolution, the grandest ruin. An astonishing amount is still standing, including the roofless church, cathedral-like in its scale. This is where the south bank route (V33b) rejoins.

Observant cyclists may have spotted the ‘Route du Bac’ a few miles earlier, a ghost road leading down to the site of one of the many ferries that once crossed the Seine. Bridge construction has cut their number, but a few still run, and you’ll take one of them across the river at Le Mesnil sous Jumièges. It runs every 20 minutes all day, every day.

After Bardouville, the route stays just a few metres from the river all the way into Rouen, on traffic-free paths most of the way. 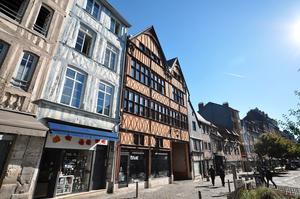 Rouen (135km) Rouen needs no introduction. The capital of Normandy, it boasts a cathedral – as painted by Monet – and a castle, art galleries and museums. But the main appeal is its medieval streets, with some 2000 half-timbered houses, many beautifully restored. If at all possible, plan your trip to include an overnight stay here: hotels are plentiful, though the main campsite is out of town.

The exit from Rouen is delightful, along the tree-lined old towpath. Suburban Saint Étienne du Rouvray and Oissel are less compelling, but worth it for the fabulous Route des Roches, the valley road in the shadow of some truly dramatic cliffs. The industrial town of Elbeuf has some fine buildings akin to Rouen’s if you venture into the town centre, but for our money the real charmer is little Criquebeuf sur Seine, a strung-out village delightfully preserved and unspoilt by traffic. There’s riverside camping at Pont de l’Arche.

Another cycle route peels off along the River Eure into the 1970s new town of Val de Reuil, which has little tourist appeal except for devotees of 20th century architecture. Our V33 follows the Seine via Poses (location of the first lock on the river) and Tournedos instead. Lovely lanes beside the river take you from here to Les Andelys. 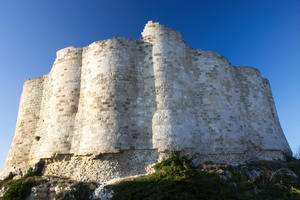 Les Andelys (204km) The Seine can’t match the Loire for châteaux, of course. But it has its moments, principally Château Gaillard at Les Andelys. Standing high above the river on the clifftop, the medieval ruin is of classic concentric design, making the most of its commanding position.

The route is unfinished here at the time of writing – follow the signage if it differs from our map. You may need to follow the (not too busy) D313 road for a short while. In an episode rather reminiscent of the Asterix books, the villagers of Pressagny l’Orgueilleux – a fairly inconsequential village with tenuous Monet connections and a population of just 700 – have been squabbling about the arrival of the cycle route since 2018. Local dignitaries have implored, cajoled, pleaded and lectured, but to no avail thus far. Just like the “little Gaulish village” facing off against the Romans, this hold-out is the one settlement stopping the whole entreprise being completed. This article (in French) has all the gory details. 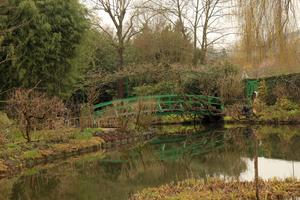 Vernon (224km) Harmony returns at Vernon, a busy town with a mixture of architectural styles, situated on the south bank of the river (there are cycle lanes on the bridge). The main tourist attraction is, of course, Monet’s garden at Giverny, a few kilometres further on. To see the same vistas made famous in painting is a startling, almost unsettling experience. The garden is predictably popular, so if you intend to visit, book your tickets in advance: the queues are notorious.

A traffic-calmed D road takes you on to a patchwork of minor roads tracing the extravagant meanders of the Seine. At Méricourt, a gravel pit has been repurposed as a marina and port de plaisance, while a hydroelectric barrage makes good use of the drop in the river. Steep cliffs on the far bank disappear to be replaced by a gentle gradient down to the water. 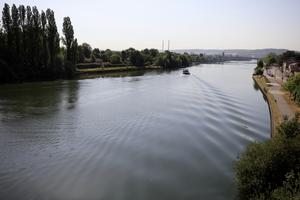 Mantes la Jolie (282km) Reputedly named “la jolie” after Henri IV’s affectionate diminutive for his favoured mistress, Mantes is a friendly provincial town best known for its towering church of Notre Dame (not actually a cathedral, but it deserves to be).

The route assumes a more prosaic character from here. Farewell châteaux; your companions now are power stations, river ports, rail yards and a Renault factory. It’s not uninteresting, and there are some enjoyable riverfront paths around Les Mureaux where you’ll be rubbing shoulders with pleasure boats. But we don’t think this leg will be the highlight of anyone’s tour. 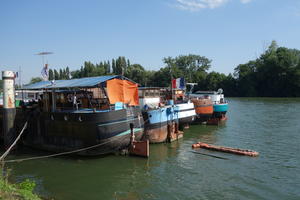 Conflans Sainte Honorine (287km) Conflans is exactly what it sounds like: the confluence of the rivers Oise and Seine. The town is the capital of French barge life, with a waterway museum and dozens of moored houseboats. Commercial barges ply the slow-flowing Seine night and day, loaded with coal, tanker liquids and containers, all with living accommodation on board and a little Citroen parked on the back deck.

You can follow the riverside road through Conflans and Herblay if you like, but the official route takes a short-cut through the forest of St Germain. The forest tracks aren’t too rough but road bike owners may choose to stay by the river. 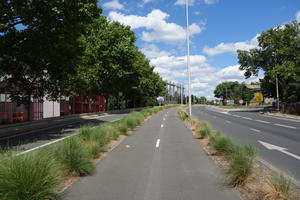 Rueil Malmaison (311km) Rejoining the river at Sartrouville, the route follows good quality bike paths along the right bank, then crosses to chic Rueil-Malmaison where there are cafés around a new square. The comfortable track takes you to the decidedly less chic port area, where a footbridge over a backwater is so steeply ramped (to preserve navigable headroom) that lifts have been provided for bikes!

At Argenteuil, the route heads inland on the busy Avenue de Stalingrad. In theory the passage through the port area of Gennevilliers follows segregated cycle lanes. In practice, parked lorries can block the route, and you may find it easier to stick to the road. Take care near the new tramway, where your wheels may fall foul of the tracks or the subtle ramps up to platforms. 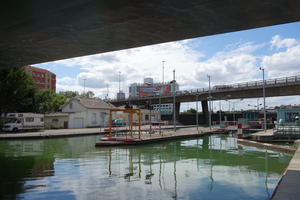 Saint Denis (329km) Like London, Paris has its urban canals, but the sheer size of the Canal St Denis is a world away from the little Regent’s Canal. The bumpy towpath gives a good insight into this multicultural area. Extensive regeneration projects are underway, so don’t be surprised to be diverted off the towpath now and then.

The St Denis meets the Canal St Martin at a T-junction. Turning right here, past an area used for the annual ‘Paris Plages’ (Paris Beach) summer festival, speeds you along segregated lanes into central Paris. The final approach to the Seine is along the Rue St Denis, a pedestrianised shopping street where cycling is permitted but, frankly, impossible due to the sheer number of walkers. You may find it easier to brave the parallel roads, or simply push. 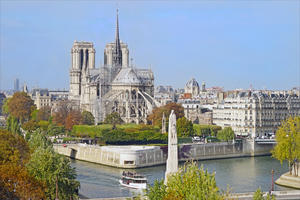 Paris (340km) Fin de la route? That rather depends whether you’re continuing above Paris. But if not, the Île de la Cité is a predictably grand setting to end your tour, in the shadow of Notre Dame. This is the classic view of the Seine… but you’ve seen it change through its many facets, all the way from the Channel.

So why not keep going? Route V33, shared with EuroVelo 3, continues directly along the riverbank, as the bustle of Paris slowly subsides and a gentle suburban peace returns. After Corbeil Essonnes, the Seine has well and truly shaken off the city. The tree-lined, sometimes gravelly towpath here provides some of the most relaxing moments of the ride.

Melun is an interesting historic town, spanning not just both banks of the river but an island as well. Or for true opulence, you could visit the Château de Fontainebleau, occupied by the French monarchy from medieval times through to the Revolution.

So for now, catch the train back; there are suburban rail stations on both banks. Before you leave, take a look at the cheerful pleasure boats that throng this stretch of the river: passenger cruise boats, converted péniches, fibreglass cruisers and lovingly restored wooden craft. It’s a long way from the massive port of Le Havre, its expanses of tideway and ocean-going ships. There’s something quite special about cycling the course of a river, and it’s something France does particularly well.