After the success of the Loire cycleway, and the increasingly popular Rhône route, a route following the River Seine was surely a no-brainer.

From Le Havre to Paris, the 340km (210-mile) route follows the meanders of the sinuous Seine. That adds an extra 100km (60 miles) onto a direct route, but crucially, means almost no climbing.

The Seine is a very different river to the slow-flowing Loire. From the Channel to the first lock just beyond Rouen, it’s a tidal, commercial waterway where you’ll regularly see ocean-going ships. Beyond there to Paris, you’ll still see plenty of freight traffic, tankers, and barges with the batelier’s little Renault or Citroën perched on the front. It may not have the châteaux of the Loire valley, but it’s still rich in heritage – Rouen itself, of course, and the ruins of Jumièges Abbey nearby.

The Seine doesn’t stop in Paris, and neither does the cycle route. You can continue another 100km to Champagne-sur-Seine along EuroVelo route 3. Eventually the intention is to follow the Seine valley further upstream to Troyes, but much of this is still awaiting path construction, and we wouldn’t suggest it as a cycling holiday yet.

Le Havre to Paris will be a four or five day tour for most cyclists. You don’t have to do the whole route, of course – the 225km (140 miles) from Le Havre to Vernon would make an enjoyable long weekend ride, and you’d see the best of the scenery.

The route is perhaps a little more fiddly than (say) the Loire, with more frequent turns, so expect this to reduce your daily distance a little. But we managed up to 70 miles a day without too much trouble.

As a river route, the gradient is generally flat and forgiving. The route does wander away from the riverbank on occasion, and given that much of the Seine valley is steep-sided, you will encounter an occasional short, sharp climb. But the only one of any significance is in the Forêt de Rouvray just after Rouen, where a long slog along a roadside cycleway takes you into the delightful, peaceful forest and a speedy descent back to river level.

It’s mostly a paved route, but some of the rural roads are potholey, and there are a few gravel sections (and, on occasion, entirely unsurfaced paths) unsuitable for skinny or slick tyres. It’ll be fine on a tourer or hybrid bike – we rode it on a Bike Friday folding bike without incident. But if you’re riding it on a pure road bike, expect to modify the route on occasion.

There are excellent, clear Seine à Velo signs along the route, installed at even the smallest junctions, and often with distances to the next town. In the Seine-Maritime département you’ll also see older, orange ‘Véloroute du Val de Seine’ signs. After Paris the signage is shared with with EuroVelo 3.

Yes: upstream of Jumieges, there’s an alternative braid on the left (south) bank, V33b. This begins at Honfleur and is entirely on minor roads. For cyclists arriving from the ferry port at Caen (Ouistreham), this is an attractive option as it removes the need to cross the rather unnerving Pont de Normandie.

SNCF run regular through trains between Le Havre, Rouen and Paris Saint Lazare. Happily, these aren’t TGVs, but TER regional trains and the older Intercités stock, all of which have good bike accommodation. You don’t even need a reservation on this line, but turn up in good time for your train, and make sure getting to the ferry on time isn’t contingent on one particular train having enough free spaces.

There’s also a Paris suburban service that runs along the river as far downstream as Mantes la Jolie.

For British cycle tourists, a ferry service has long operated between Portsmouth and Le Havre, but this has an uncertain future. At present, your best bet is to take the ferry to Caen (Ouistreham) and cycle 50 miles along the coast towards the Seine. This, of course, lands you on the wrong side of the river! Bikes are permitted to cross the towering Pont de Normandie, but you might find it more hospitable to head inland on the south bank of the Seine, crossing on the ferry at Quillebeuf or Jumieges. 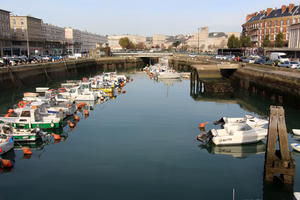 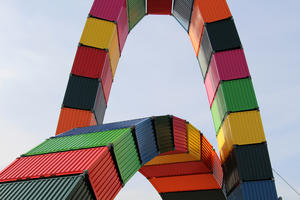 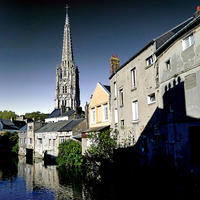 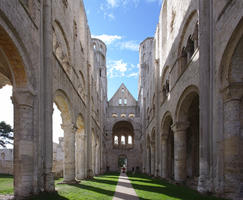 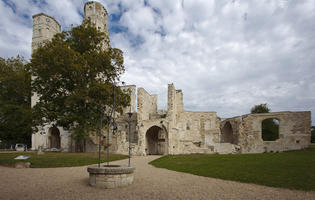 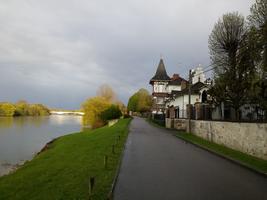 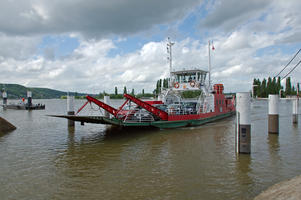 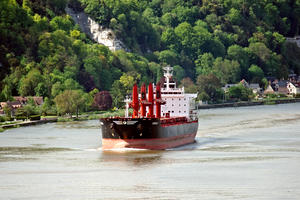 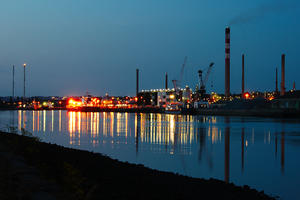 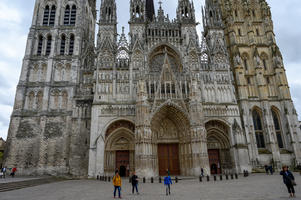 Did this route(ish) last Summer. Mostly had a good time after finding my way out of Le Havre. There and Rouen are getting a lot of work on cycle routes so those should be easier. If you don't fancy Paris there is a good route from Giverney to Gisors on the Avenue Verte to Dieppe. The garden of Monet at Giverney is rather nice but very crowded. It's all rather an amazing mix of old and new.

Tip: If you're camping, French cemeteries usually have a fresh water tap or pump. French campsites are good value.

Wondering why the route follows the V16 across the Vexin rather than carrying on along the river on the V33?