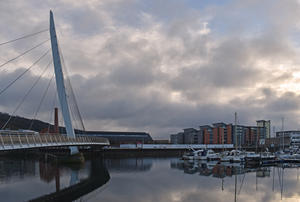 Swansea National Cycle Route 4 takes quite the best course around Swansea, following the regenerated Swansea Bay waterfront. Leaving the city, it relapses into a featureless roadside path; instead, follow the towpath of the Tennant Canal, sister waterway to the Neath Canal that we’ll pick up shortly. A short spell beside the A48 takes us over the River Neath bridge in the shadow of the motorway viaduct.

Here we begin the long, gentle ascent of the Neath Valley. It’s canal towpath (almost) all the way, and this first section from Briton Ferry is laid in butter-smooth tarmac. Lush green vegetation across the canal precludes passage by all except the most adventurous canoeists, but for those of us on the towpath, only the low bridges obstruct movement – take care with the restricted headroom and width. 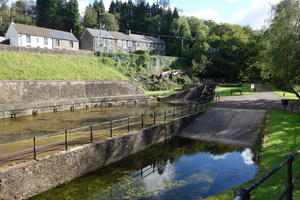 Neath (8mi) 14th century castles and 19th century canals aren’t natural bedfellows, but at least Neath Castle can say it now has a moat. Despite some renovation works in the 1990s, the canal is almost entirely bereft of boat traffic, giving it an appealingly unkempt, natural air. Shortly after you leave Neath, there’s a cycle route junction by the lock: NCN 47 heads uphill on a remote gravel route towards the Rhondda, so be sure to continue on NCN 46 along the towpath.

Tonna marks the end of the rebuilt towpath surface: from here to Glyn-Neath, it’s unsurfaced throughout. The first few miles are a reasonably smooth (if narrow) gravel path, but as you head further inland, the stones get bigger, the potholes larger, and the tree roots chunkier.

At Resolven, the route leaves the canal for a mile along the B4242, once the main valley road until the A465 was constructed. It rejoins the towpath by the attractively restored basin, but this is the bumpiest section, so we’d suggest skinny-tyred cyclists continue on the road. That is, after stopping for coffee and cake at the ever popular canalside café just along from the basin. Hybrid and MTB riders will be ok on the towpath.

The canal is properly derelict here, its locks overgrown, ungated and silted up. We finally leave it at mile 18, rejoining the B4242 into the strung-out valley town of Glyn-Neath. 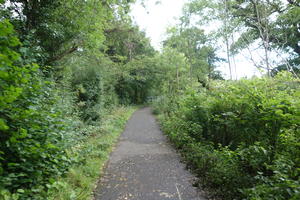 Glyn-Neath (19mi) This route crosses each of the Valleys in turn, and that, inevitably, means climbing. The two first climbs are the hardest, starting with the two-mile ascent from Pontwalby. It’s a favourite with local cyclists wanting to test their legs, so don’t get disheartened as whippet-thin racers speed past your loaded bike.

Just before Glyn-neath, you might have noticed the last vestiges of the Welsh coal industry at Aberpergwm, the last surviving drift mine. As you descend towards Rhigos, you’ll see the former access roads to the much larger and better known Tower Colliery, the oldest continuously-worked deep mine until its closure in 2008.

A short roadside path and narrow footbridge across the A465 take you into Hirwaun and a comfortable tarmac path by the infant River Cynon. This continues to Llwydcoed, where a narrow, steep crossing of the river leads to minor roads and the second major climb – reaching 8% as it ascends towards the A465.

Gellideg (29mi) Here is the one unavoidable drawback of this route: a mile on the busy, three-lane A465. We wish we could recommend an alternative, but there’s no (official) one without a 20-mile detour. The Welsh Government has promised to build a path when it eventually rebuilds this section of road, or perhaps the plans to open up the old Abernant railway tunnel for cycling will provide an alternative.

Until then, you have two choices. You can don your hi-vis, turn your rear light on, and pedal downhill to get this grotty mile over and done with. The right turn across two lanes of traffic to get onto Swansea Road is inevitably difficult and you will need to “take the lane” (especially as, strictly speaking, it’s a ‘no right turn’). We wouldn’t recommend it.

Alternatively, there’s a time-honoured (if unofficial) diversion. When you reach the A465 junction, cross the road from the cycleway onto a path blocked off by boulders. Push your bike along the field edge until you reach an old road with broken tarmac. At the far end you’ll need to find a gap in the fence, or lift your bike over the gate. The area may be in use as a road construction yard, so we can’t guarantee that this will be possible when you visit. (We’re slightly amazed that the £100,000 that would be required to make a usable footpath hasn’t been spent, but there you go.)

Follow the Swansea Road into Gellideg. Watch out for the sharp left turn by the shops, which is easy to miss. 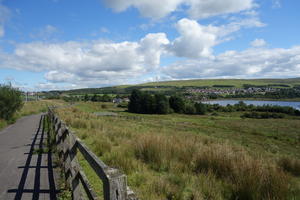 Cefn Coed (32mi) Good news. After enduring the A465, you have six top-class miles to enjoy, shared with the Taff Trail (NCN 8) to Pontsticill on a deservedly popular wide, tarmac railway path, old station platforms and bridges still much in evidence. At the end, a sharp right turn takes you back south past the Brecon Mountain Railway’s narrow gauge operation. There’s a welcoming café here, as well as a useful convenience store a mile further on in Pant.

Do load up with bananas or chocolate according to taste: the cycle path climb up past the reservoir is infeasibly steep, and there’s no shame at all in pushing! You’re rewarded with excellent views down the valleys. Note, too, the new bridge across the entrance to a retail park, the first of several path improvements carried out as part of the massive A465 dualling scheme.

After crossing the top of the Rhymney valley, the route takes a remote-feeling private road past a wind farm. The path past Tredegar Reservoir was confusingly signed on our visit: if you find yourself circling the reservoir you’ve missed the turn. Cross the A465 again and follow a narrow tarmac path above the busy road below. Waundeg (41mi) If you have the legs for a 1.5 mile detour, we’d strongly suggest heading north from Waundeg up the minor road to the old quarrying village of Trefil. You’re only a stone’s throw from the Brecon Beacons here – indeed, if you don’t mind vertiginous gradients and a bit of gravel, you can descend to the lovely Crawnon valley, but that’s another story.

No, our recommendation of Trefil is largely for the Top House, one of the highest pubs still left in the Valleys. Having finally breathed its last as a no-nonsense boozer, it reopened in 2020 as a refurbished, friendly house with local beer and seriously tempting food.

Suitably refreshed, return to the route. The exit from Waundeg follows an old railway trackbed, one of the many competing lines that served the Valleys. From here, the route has been largely rebuilt as part of the A465 works. Though an enormous dual carriageway carving through the landscape is hardly to be celebrated, there’s no denying we have a top-notch cycleway as a result.

After crossing a roundabout, a respectable new roadside path in a cutting, and a short climb through the housing of Rassau, lead to the spectacular new route. When the A465 crosses the Ebbw Fawr valley on a massive embankment, we swoop down below the retaining wall, the valley opening up to our right. Then the smooth path slowly climbs up to the moorland between valleys, dodging a busy sliproad via a new culvert. It’s exhilarating stuff, the wide ribbon of tarmac coursing across the wide open space. A gently rising peak shields your view of Brynmawr’s terraced streets, just half a mile away. 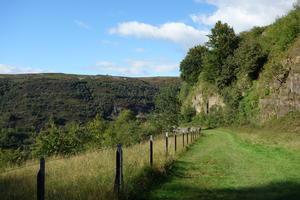 Brynmawr (48mi) The final route across the A465’s Brynmawr interchange has been in flux while the dual carriageway is built, and there’s still work to do. Follow the signs if they say differently, but our course was to leave the cycleway via a garage yard; turn left to the footbridge over the A465, then continue parallel towards the imposing new road bridge. Cross back to the southern side, and head left at the roundabout until you see NCN 46 signs again.

The final eight miles through the Clydach Gorge are (excuse the pun) a gorgeous end to the ride. For the most part, the route follows the old railway trackbed, clinging precariously to the valley sides. It’s a long, slow descent from the 380m contour above Brynmawr to just 45m by the Usk in Abergavenny.

The most eyecatching section comes through the Cwm Clydach National Nature Reserve, where the surface has been left as grass in deference to the ancient beech woods. Here, as streams run down from the mountainside and cleave the valley sides, the path snakes back and forth to keep you on the level. Look out for signs of the original railway tunnel.

There’s a short diversion above Clydach village, where an uncooperative landowner has refused to let the path continue on the old trackbed. The tiny lanes aren’t an unpleasant alternative, but again, there’s a short, steep climb involved. Do look carefully for the NCN signs marking the sharp turns. Back on the railway path, it’s an easy ride down to Govilon, where the route crosses the Monmouthshire & Brecon Canal. 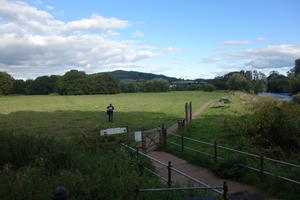 Abergavenny (57mi) One last underpass and we wave goodbye to the A465… and hello to Abergavenny. The entrance to the town is along a rather corrugated path through the river meadows, where you’ll inevitably need to steer onto the grass to dodge the many families and solo walkers enjoying Abergavenny’s own front garden. No matter: it’s an enjoyable approach to a thriving market town.

Wheel your bike up the rocky path past the castle to the pedestrianised high street, lock up, and enjoy Abergavenny’s cheerful collection of independent shops, pubs and cafés. The railway station is on the south side of the town and clearly signposted with NCN stickers.

Abergavenny is something of a junction on the National Cycle Network. Route 46 continues on to Hereford; you can also take route 42 south to Chepstow, or north to the fearsome Gospel Pass and Lon Las Cymru. But maybe your appetite has been whetted to explore the Valleys some more – and there’s a whole network of routes to help you do this, starting with NCN 49 down the canal path to Newport.