Zooming in I can see that the via point made it go this way.

On day two at 49-50 km between Pant y Colli and Penrheol  (you can see these on OS maps) the route choose a path that went through two farm yards with closed gates and the path was made of fist sized rocks that I couldn't ride up or down.

The road surface seems to be correctly labelled on Open Streetmap

I've got a route I started to create and saved. I have then tried to edit it but if I click on the route it opens a box saying 'Add via point' and if I select this it says "Cycle Travel says Sorry we can't plan routes across the sea. Please plan journeys to/from your ferry ports." and then deletes the whole route. The route is between Bristol and Birmingham and I'm trying to add a waypoint 5 miles north of Bristol nowhere near the sea. 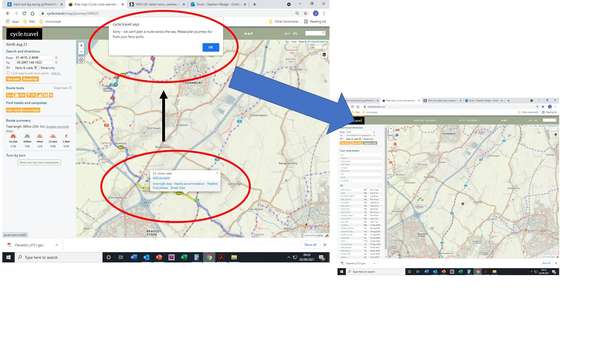 Paths shown as paved that aren't

Last week I rode from Bath to Cornwall and used a new route plotted on Cycletravel. As usual this gave some great quite roads and some lovely riding. With the exception of two; the first started as a tarmacked descent which then turned into concrete and then the concrete was broken up so just a pile of fist sized rocks. A closed gate saying 'only use at your own risk' and then two rocky unmetalled hollows separated by a central grass mound. As I was on a 'road' bike this was virtually unridable but I'd gone done a long steep hill to get that far I was committed. Not long after I saw the state of the second section of road and went around it. Both are shown as paved on Cycletravel but they are not.

Is there some was of telling you which sections these are so they can be re-assigned as unpaved?