Bristol The West Country Way starts gently, with a very pleasant route out of Bristol along the riverbank and the Whitchurch Railway Path. If you’re arriving at Temple Meads station, head down the station approach road; turn left at the bottom; then left again onto the riverside path. Chew Magna Lake, 11 miles in, is an ideal spot for your first café stop of the ride.

West Harptree (14mi) The Mendips are the first hurdle on the West Country Way, a hulk of rock separating Bristol from the rural West. It’s a simple one up, one down challenge; the climb is tough though not too long. The Queen Victoria at Priddy, just before the descent begins, is a very pleasant stop. From here it’s a two-mile descent to Wookey Hole and its dramatic, though a little touristy, cave system. 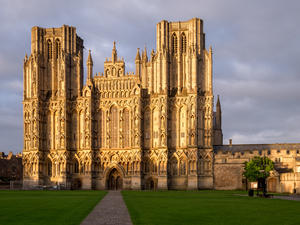 Wells (27mi) Wells comes soon after and the cathedral is a must-visit. The cycle route takes you straight past the front, but do keep a careful eye out for signs, as the one way system can be confusing.

The route from Wells to Glastonbury is circuitous – and deliberately so. The A39 does it in four miles, NCN 3 takes nine. 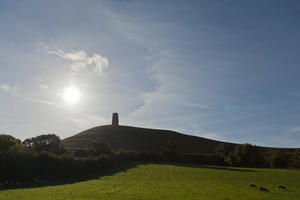 Glastonbury (37mi) It’s worth it, for the tiny lanes past Glastonbury Tor have the finest views in the area. You arrive directly on Glastonbury High Street, epicentre of all things New Age and ecological. The town has plentiful B&Bs… just so long as you don’t mind vegetarian sausages for breakfast.

A quiet railway path leads to the modest Polden Hills, barely deserving of the name, and lanes crossing the pancake-flat Somerset Levels. The route at Bawdrip was formerly infamous when a landowner withdrew his permission, forcing a detour across rough fields and a busy road; happily, an alternative route has recently been opened.

Bridgwater (55mi) NCN 3 follows the River Parrett’s east bank for a mile into Bridgwater town centre, then executes a 180° turn to leave via the canal towpath. You can cut the corner by hefting your bike over the river on a narrow footbridge, but if you’re not pushed for time, Bridgwater is a moderately pleasant town with attractive old docks.

The easy riding continues for the next 30 miles which are, more or less, all about the canals. These waterways aren’t connected to the main English system, so boats are few and far between, but they’re no less pretty for it. The Bridgwater & Taunton Canal, which provides almost all the route to Taunton, has an intriguing scale model of the solar system along its banks – the ‘Somerset Space Walk’. There’s a very welcome café at Maunsel Lock, five miles out of Bridgwater.

Taunton (67mi) Give or take a little faffing at the western end, the waterside route through Taunton is attractive and easy to follow. The Grand Western Canal once continued all the way from here to Tiverton, but its eccentric choice of boat lifts rather than locks doomed it from the start. With much of it ploughed into the landscape in the years since closure, the cycle route is forced onto country lanes, and there’s some moderate climbing for the first time since the Mendips. 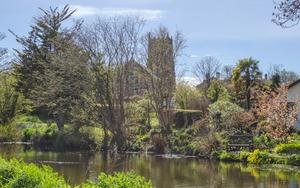 Sampford Peverell (86mi) The last miles of the canal were level and lift-free, and this section has survived. The route follows the towpath to Sampford Peverell, where a useful link connects NCN 3 to the well-served Tiverton Parkway railway station.

Tiverton (92mi) Tiverton itself, six miles on, is an unspoilt little town on the River Exe, with tea-rooms, a bike shop and all provisions. Make sure to refuel here, top up your water bottle, and stock your panniers with all things nutritious and energy-giving. The next stage is wild – and hilly. After the tiny towns of Bampton and Dulverton, the crossing of Exmoor is 20 miles of remote cycling with just one lonely pub in the middle. It’s not a place to find yourself tired and hungry.

Bampton (100mi) Before that, there’s an undulating, meandering 13 miles on rural lanes; as is so often the case, the A road has claimed the valley for its own, though if you don’t mind a short stretch on the A396 there’s an alternative, flatter lane on the opposite bank of the Exe. Accommodation and basic provisions are available in Bampton, where the Quarryman’s Rest is a long-time favourite.

Dulverton (107mi) A short killer of a climb out of Dulverton marks the start of Exmoor. After the first mile, it’s a steady haul all the way to the top, the road levelling out slightly after the cattle grid at Anstey Gate. The views range widely on a clear day, until the route turns inland into its own equivalent of Tolkien’s Shire. The Sportsman’s Inn is a welcome outpost just before the summit; accommodation is available, but book well in advance. 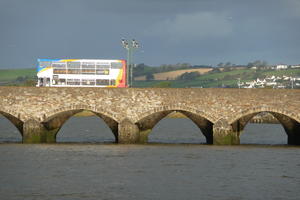 Barnstaple (139mi) It’s a long descent from the 480m summit of Exmoor to the sea at Barnstaple, but there's one or two nasty little kicks to keep you exercised on the way down. The route avoids Barnstaple town centre, but it’s just half a mile on NCN 27 if you’re planning a visit.

At Barnstaple, NCN 3 is joined by the Devon Coast-to-Coast route for 20 glorious miles of railway path. This is the Tarka Trail, taking in the resorts of Instow and Bideford en route to the Devon interior. The first 10 miles are particularly busy, with several bike hire centres disgorging hordes of novice cyclists onto this picturesque, safe route – and plentiful cafés and pubs competing for their custom.

At first the views are of the Taw estuary; twitchers will be in their element here. Take care at Instow, where the road crossing is a little confusing: look for signs to avoid ending up in the yacht club. 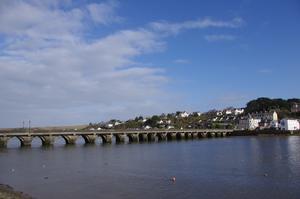 Bideford (148mi) Between Bideford and Great Torrington, the River Torridge becomes your faithful companion, repeatedly crossing on old railway viaducts. Finally, the path heads into quiet woodland, the crowds thin out, and the only sign of life is the wonderful café and hostel at East Yarde. The route eventually dives off via country lanes and a short, sharp ascent at Petrockstowe.

Sheepwash (165mi) Devon County Council appears unwilling to rest until every last old railway in the county has become a cycle route. For now, the route to Bude largely follows undulating minor roads, but the length of railway path is slowly increasing.

Shortly after leaving Sheepwash, a little village with a friendly pub serving good food, there are two possible routes. Unless you’re feeling masochistic, stick to the (very pleasant) lane on the north of the Torridge valley; the route via Black Torrington is gratuitously hilly.

Holsworthy (176mi) There’s a railway path either side of Holsworthy, and a useful supermarket in the town centre. The lanes resume to Bude, quiet and uneventful except for the final steep descent. 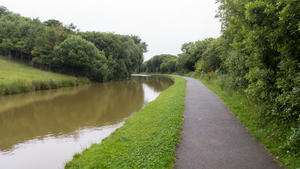 Bude (187mi) An amiable resort town, this is the end of the West Country Way, but not of NCN route 3; that continues on to Land’s End as the Cornish Way. You’d have to be pretty robust to tackle both in one go – but there’s nothing to stop you coming back later…