Leeds Good news: you can cycle from Leeds to Skipton on the flat, through superb scenery, without meeting a single car. This is all thanks to the Leeds & Liverpool Canal, a winding trans-Pennine waterway whose towpath is open to cyclists. There’s a direct path to the towpath from Leeds station.

The towpath is also known as the Aire Valley Greenway, and its surface has been upgraded greatly in recent years. (You might find some works further on are not yet complete; the unimproved towpath is fine for hybrids and cross bikes, while road cyclists can dive off onto the parallel main road.) 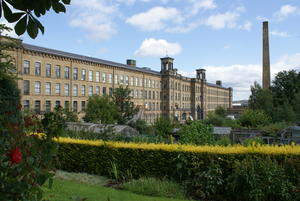 Saltaire (13mi) Near Shipley, the canal passes Titus Salt’s ‘model village’ of Saltaire. Built as a humane community for his millworkers, its uniform architectural style has remained unspoilt. It’s no longer a dry village, though, and Fanny’s Ale House is the finest boozer en route from Leeds to Skipton. 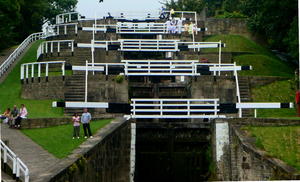 Bingley (15mi) The canal slowly climbs the Aire Valley through a series of locks, none more dramatic than at Bingley, where a staircase known as the ‘Five Rise’ is one of the wonders of the waterways. It’s a definite photo opportunity and, at 25 miles after Leeds, a good place to pause for a snack. 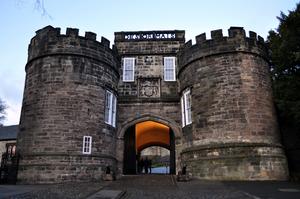 Skipton (29mi) The gateway to the Yorkshire Dales, Skipton is a lovely market town recently named by the Sunday Times as the best place to live in Britain. We can see why: picturesque but down-to-earth, arty but unpretentious, posh delis rubbing shoulders with Morrisons and a bustling market. We leave the canal towpath here and head into town. By the church, at the end of the main street (before the castle), turn left on the B6265 towards Grassington. Follow this out of town over the bypass.

This is where we join 2014’s Tour de France route proper. It was a great choice of route by the Tour organisers, a steady climb up the very attractive valley of Wharfedale. The first few miles can be busy, especially at weekends, but the traffic thins out as you get further up.

Cracoe marks a brief encounter with the Way of the Roses and the Yorkshire Dales Cycleway; there’s a café and pub here. Continue on the B road to Threshfield. 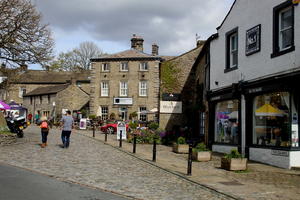 Grassington (39mi) At Threshfield, the 2014 route took the B6160 to Kettlewell. However, we can’t resist a scenic detour on the B6265 to Grassington, one of the jewels of the Dales and a great place to stop for coffee and cake. Take Grass Wood Lane north out of the village, passing the Toffee Shop and Grassington Lodge. This is parallel to the official route on the other side of the valley, but quieter.

Kettlewell (46mi) Rejoin the B6160 at Kettlewell, and follow this narrow road up the valley through the tiny villages of Starbotton and Buckden, each with their own pub. 2014 saw the valley littered with hastily arranged campsites as crowds flocked to watch the Tour come through.

(If you really want to tax your legs, you can turn left at Buckden, following the sign to Hubberholme, and continue over the hill road to Hawes. Yorkshire’s highest pass, this is a superbly scenic Dales lane – but not an easy one!) 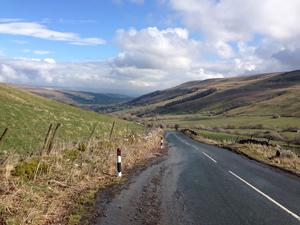 Kidstones Pass (52mi) Continuing along the B6160 past the White Lion pub at Cray, we meet the first proper climb of the 2014 Tour: Kidstones Pass. The gradient suddenly lurches upwards and the bends tighten, but it’s worth it for the glorious long descent from here to the River Ure valley. Keep following the road downhill, past the Old School Bunkhouse, until you reach West Burton. Here, fork left on a road signposted Aysgarth (light vehicles only). One final short, steep climb – we won’t mind if you get off and push – takes you up to the A684 road. (The Tour cyclists went to Aysgarth via Thoralby, but we thought we’d save you a bit of climbing.) 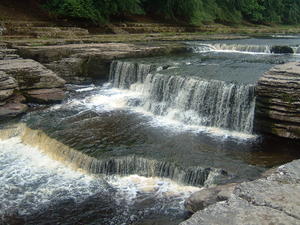 Aysgarth (59mi) The official Tour route went up Wensleydale on the busy A684. We choose to follow a quiet minor road on the other side of the River Ure; there’s less traffic, more to see, and a couple of cafés on the way.

First, though, we follow the A684 for a few hundred yards uphill to Aysgarth Falls village. Turn right to the falls themselves, down an exceptionally steep descent (25%). Even though it means losing your momentum, you’ll want to stop at the bridge at the bottom to see the water tumbling down the river. There’s a footpath immediately afterwards should you want a closer look, and tea-rooms both here and at the visitor centre.

Climbing back up from the river, you’ll see the Wensleydale Railway station – but no railway! This heritage railway project aims to reconnect the East Coast with the Settle & Carlisle railway, but as yet the trackbed here remains untouched.

Turn left at Carperby, then follow the valley road with signs to Askrigg and Hardraw.

Askrigg (64mi) Askrigg has several friendly tea-rooms – look out for the old Cyclists’ Touring Club above one of them. Ignore the first sign for Hawes, which will take you back on to the A684, but continue up the valley until you’ve passed the Sedbusk turn. From here, you can turn left over the river to visit Hawes. 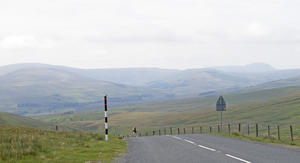 Buttertubs Pass (69mi) Turn right up the Buttertubs Pass, signposted to Muker. This was the Tour route for the second climb of the day – and, arguably, the highlight of the first Tour stage. A wide, well-surfaced road all the way over to Swaledale, it begins fairly gently but soon gets steeper. There are superb views from the High Abbotside vantage point, one of the finest places in 2014 to watch the climbers battling their way up!

But the sharp descent is as much a thrill as the climb. The valley falls away on the right, separated by only a flimsy barrier. Watch out for the sharp bend halfway down. It ends at a T-junction, where you turn right on the B6270. You can recover your nerves at the pub in Thwaite, or continue along to postcard-perfect Muker with its tea-rooms, pub and church on the hill. 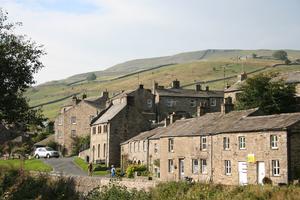 Muker (76mi) The superbly chosen Tour route continues on this little B-road along Swaledale, perhaps the most picturesque of the Yorkshire Dales. It’s a far cry from the wide, straight roads that often characterise the Tour’s passage through France, and certainly made for exciting racing.

For those of us taking a more relaxed pace, it’s even more enjoyable. The road continues gently downhill beside the Swale, often passing very close to the riverbank. There’s even a dose of whimsy to match this sublime landscape, in the shape of a village called Crackpot.

Reeth (88mi) Follow the B-road all the way, ignoring separate signs for the Yorkshire Dales Cycleway. There’s a small climb on the way into Reeth, a hilly village where shops and cafés are clustered around the village green. (The Dales Bike Centre is on the way in if your bike needs attention.)

Take the chance to refuel in Reeth, because there’s another big climb imminent – Whipperdale Bank, aka Grinton Moor. Follow the B6270 out of Reeth, then carry straight on in Grinton when the B-road swings left. The climb begins immediately with the steepest gradient of the day. Then bear left towards Leyburn, rather than taking the Yorkshire Dales Cycleway to the right.

Grinton Moor is a military area, and red flags fly when shooting’s underway. There’s even a faded ‘Learner Tank Drivers Under Instruction’ sign by the side of the road. This means the raw beauty of the moor is largely unspoilt, and you’ll have plenty of time to appreciate it during the long climb. Do turn back now and then to see the great views. There’s a brief switchback as the route crosses a moorland stream; watch for oncoming traffic, as the bridge is very narrow.

Leyburn (95mi) It’s a long, slow descent with occasional ups from here to Leyburn, crossing the busy road to Catterick on the way. The entrance to Leyburn isn’t too attractive, but the town itself is a busy little place with interesting old architecture.

From here, the Tour riders followed A roads all the way to Harrogate. This isn’t our idea of a good time, so we suggest here a quieter alternative on minor roads and cycleways. Happily, it’s not just quiet, but attractive too – and the terrain is much less taxing than the Dales. Harrogate is the stage finish and also the first railway station, but if you can arrange alternative transport, you might choose to finish at Masham or Ripon instead.

From Leyburn town centre, take the A684 signposted to Bedale. This is a busy road but tolerable: continue through Harmby, then take the next sharp right onto a quiet lane. Turn right at the end of the lane and follow the road, signposted with stickers as NCN route 71. When it bears left for Finghall, turn right towards Newton-le-Willows instead. Passing several junctions, ignore the left turn to Newton, then turn right at a group of cottages, signposted Thirn. Navigation is easy from here: turn right at the end of the lane, then head due south on the road to Masham. There are lovely views from the tree-lined lane over the Ure valley. 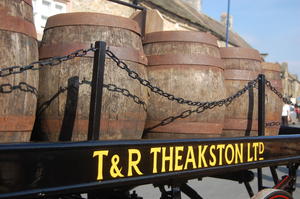 Masham (107mi) Masham is nationally known for its beer. The Theakston brewery was established here, but when the rest of the family sold out to Big Business, Paul Theakston struck out on his own and established the aptly-named Black Sheep Brewery. Now, the original Theakstons is back in independent hands, and both thrive in this tiny town with a vast market place – and several pubs where it would seem disrespectful to drink anything else.

The road south from the Market Square from here to Grewelthorpe is uninspiring but direct. If you have time, you can follow the National Byway signposts via Low Swinton.

Grewelthorpe (110mi) At the Crown Inn in Grewelthorpe, take the quiet road to pretty Kirkby Malzeard. Then at the crossroads by the Queen’s Head in Kirkby Malzeard, take the National Byway south towards Grantley and Galphay. Turn left through Galphay, then follow the undulating minor road towards Ripon (the last mile on a B-road).

Alternatively, for a more direct route on country lanes avoiding Ripon, continue south from Kirkby Malzeard through Winksley, passing Aldfield, to Fountains Abbey. This route is signposted as part of the National Byway. 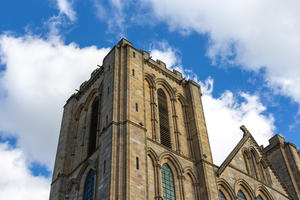 Ripon (118mi) Ripon was a landmark on the 2014 Tour stage, justly prized for its old streets and soaring cathedral. It has much of the character of York, but without the crush of tourists.

On leaving Ripon, follow the Way of the Roses route westbound (NCN route 688), with its glorious stretch through the grounds of Fountains Abbey – all credit to the National Trust for welcoming cyclists. All of this is a bit of a diversion, but we think Ripon and Fountains Abbey are more than worth it.

Fountains Abbey (124mi) Follow the Way of the Roses south from Fountains Abbey, then pick up NCN route 67 via Markington when you see the signs. This winds attractively round to Ripley. Then, from the village, it’s plain sailing to Harrogate on the newly opened traffic-free railway path. The highlight is the Nidd Viaduct – one of many reasons for those who appreciate industrial heritage to support the work of Sustrans. 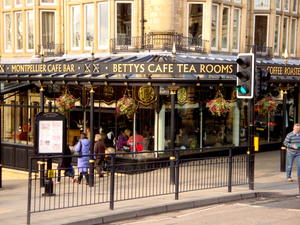 Harrogate (135mi) NCN 67 winds its way through Harrogate on back-streets towards the characterful town centre. Yorkshire’s answer to Cheltenham or Bath, Harrogate is an upwardly-mobile spa town famous for Betty’s Tea Rooms – surely the plushest in the county – and with a selection of designer shops. It’s not too hoity-toity to welcome almost 200 sweaty Tour de France cyclists, though; and we reckon that if you tell the hoteliers and restauranteurs that you’ve followed (almost) the same route round Yorkshire, they’ll welcome you with open arms.