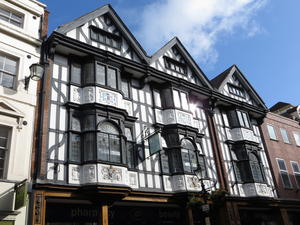 Shrewsbury Shrewsbury Castle, the first of our six, is just outside the railway station. Today it serves as the Regimental Museum, with grassy grounds that are a pleasure to picnic in on a sunny day. From here, drop down to the riverbank: the River Severn loops around Shrewsbury town centre, and you can ride along pretty much the entire riverbank. There’s a cycle café at the Trek bike store on Wyle Cop (Shrewsbury streets have great names!) for your pre-ride coffee. If you have time to explore, Shrewsbury is an endearing town with top-quality pubs, independent shops and cafés hidden down back streets.

Cross the river on the pedestrian bridge and make your way out to the inner ring road following NCN 81 signposts. Here you pick up NCN 44, the Six Castles Cycleway. On the busy road through Hookagate, keep an eye out for heavily laden cyclists coming the other way – this is a favourite route for Land’s End–John O’Groats riders. Turning off after Annscroft, the traffic thins out and you can enjoy a gentle ride to Pontesbury.

A new roadside shared-use cycleway runs from here to Minsterley. Originally the route took a hilly detour via Habberley, and this is still signed as the National Byway route if you fancy stretching your legs. But we wouldn’t recommend it – there’s plenty of climbing to come.

Minsterley (12mi) After Minsterley, which has a Co-op, butchers and pub, the route skirts the edge of the Stiperstones hills. A quiet B road gives way to tiny lanes through Rorrington and Priest Weston. High hedges and tree cover sometimes block the immediate views, but there’s no mistaking the hills rising to the east.

The route here is undulating but not tough, and there’s real enjoyment in seeing a new vista at the top of each rise. Unremarked by signage, you actually cross into Wales a few miles before Churchstoke. 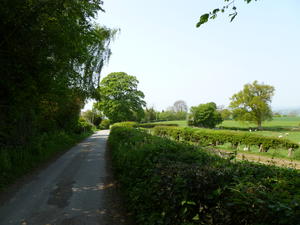 Churchstoke (23mi) When we said “hilly”, we meant it. This stage has the toughest climb of the route – indeed, one of the toughest on the National Cycle Network.

First comes Churchstoke, a curious little village at the junction between two (not very busy) A roads. If you need supplies, Harry Tuffin’s famous supermarket emporium is just east of the village on the A489, though rather less eccentric now that it’s been acquired by the Midcounties Co-op. Do visit the 13th century church of St Nicholas – a rarity in that it’s still part of the Church of England despite being in Wales.

Two pancake-flat miles take you to the B4385. Here you have a choice. You can turn left and follow the B road into Bishop’s Castle the flat way. There’s virtually no traffic – and no shame.

Or zigzag across the road, following the NCN 44 signs, and begin 3.5 miles of climbing. It hits 14% at times, the same as the notorious Ditchling Beacon on the London–Brighton ride. The views from the top are worth it, rolling hills towards remote Clun Forest. The descent into Bishop’s Castle, along the ancient Kerry Ridgeway drover’s road, is every bit as good as you’d hope. 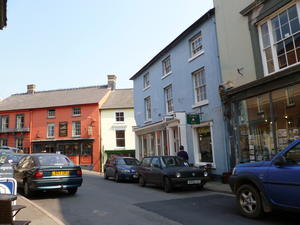 Bishop's Castle (30mi) There’s not a lot of castle (or bishops) in Bishop’s Castle; just a motte and a few foundations. Happily, it’s an utterly beguiling town otherwise, bohemian in the same way as Hebden Bridge or Frome – but much smaller. Two classic pubs bookend the town, the Three Tuns and Six Bells. Yarborough House is a superb second-hand book and classical CD shop. Given the hills to follow we wouldn’t recommend stuffing your panniers with too many book bargains, but we would recommend stuffing yourself with the cake on offer here.

There’s a fairly flat B road from Bishop’s Castle to Craven Arms. The cycle route, needless to say, doesn’t follow it. Instead, it goes over a hill, then another. Though they’re not quite as monstrous as the climb out of Churchstoke, the fact that a friendly local has erected a bench midway up one hill and carved “Stop & Rest” into it should give you some insight into the challenge.

But once again, if your cake-fortified climbing legs are still in full working order, then these are joyous roads to ride. In particular, the first hill (bypassing Lydbury North) has outstanding views to the south. 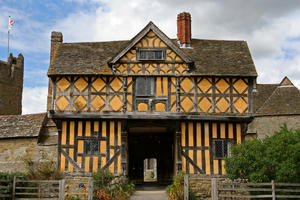 Craven Arms (38mi) Rather less glamorous than the artisan towns of Bishop’s Castle and Ludlow, Craven Arms sprang up as a railway junction town (the remote Heart of Wales line still starts here) and continues to thrive as a stop on the busy A49.

The ‘49’ isn’t a very pleasant road at the best of times, and the cycle route sensibly spends the minimum amount of time on it. However, we would suggest you take a brief detour on the path beside the road, south from the town, to visit Stokesay Castle. It’s not really a castle but a 13th century manor house, its yellow and black appearance wonderfully reminiscent of Shropshire Blue cheese. English Heritage look after it and run a very good café in a cottage alongside. Of the six castles en route, this is the one not to miss. If you have time, the nearby Shropshire Hills Visitor Centre is also worth a visit.

From Craven Arms, the cycle route takes a circuitous route to Onibury, where the Apple Tree is an endearing pub in a former village shop. There’s a respite from the climbing now as the road follows the Teme Valley into Ludlow. At Bromfield, the outstanding Ludlow Farm Centre is a farmshop-cum-supermarket with another good café. A tiny underpass takes you safely past the A49 onto a barely maintained farm road, entering Ludlow the back way, safe from traffic. 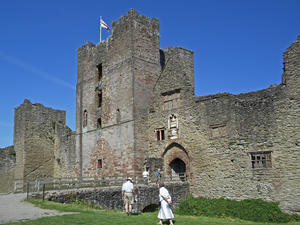 Ludlow (48mi) One of the country’s most celebrated market towns – John Betjeman called it “probably the loveliest town in England” – Ludlow needs no introduction. A cluster of Michelin-starred restaurants (three at one point) has attracted thousands of foodies to its Georgian streets. The castle is the closest to a “proper castle” of the six en route, and perhaps the finest in the whole of the Marches. But, most of all, it’s just a great place to mooch around. There are bike stands in the pedestrianised area outside the castle, so lock your bike up here and enjoy exploring.

It’s a long haul out of Ludlow up to Mortimer Forest, on a road known rather fatalistically as Killhorse Lane. The route twirls through the forest on some startingly steep, narrow lanes before diving back down to Orleton, at almost exactly the same altitude as Ludlow. (Again, should you want to save the climbing, you can follow the B roads instead.) A few miles off the route is Richard’s Castle: should you want to explore the fragmentary ruins, they’re close to the village church, though to be honest there’s not much there.

Note that between Ludlow and Leominster, the permanent signs are brown National Byway ones rather than blue National Cycle Network ones. You will see a few blue stickers installed by Sustrans volunteers. 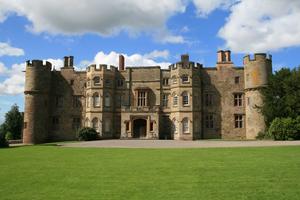 Croft Castle (61mi) The pretty village of Yarpole is remarkably community-minded. Not only does it have a village shop housed within the church, but the locals bought out the village pub (the Bell), too. This comes just before Croft Castle, an ornate crenellated country house now in the care of the National Trust. The route (still signposted as the National Byway) goes directly past the castle, with the NT presumably hoping you’ll stop off for a cake at their café. As befits a castle, even a pretend one, it’s on a commanding position above the nearby landscape, which means… yes, another hill.

But that’s the last one. From here, it’s an easy run into Leominster through low-lying pastureland.

(2) · Riverside Inn, Aymestrey · Mortimer Trail B and B

Leominster (67mi) Leominster isn’t as widely celebrated as Ludlow, but some of the latter’s shine has rubbed off on this important border town. The route takes you down Broad Street and High Street, both fine commercial streets, and though it might not have Ludlow’s affluence there’s a real sense of local pride.

The railway station for your return journey is just to the east of the town centre, or you could continue following the National Byway signs for 25 miles to Ledbury. Be warned: there are hills…