This emerging new challenge route tours through the piémont Pyrenéen – the Pyrenean foothills. From the Atlantic coast at Biarritz to the Mediterranean near Perpignan, you’ll experience the scenery of the Pyrenees… without needing Tour de France climbing skills.

Don’t think that this is second-best to the high Pyrenees. Far from it. You’ll pass through Pau (a Tour favourite), the pilgrim town of Lourdes, and along some particularly fine traffic-free trails, notably the Saint Girons–Foix greenway.

Millions have been ploughed into building the rail-trail sections, with bridges rehabilitated, tunnels secured, and traffic-free underpasses installed. These are still a minority; 75% of the route is currently on-road, usually tiny single-lane routes with just a handful of cars. Perhaps most surprising is that many of these are not much harder work than the rail-trails: well-chosen valley routes minimise the climbing.

There are climbs, of course – after all, if you wanted a totally flat Atlantic–Med route, you’d have chosen the Canal du Midi towpath. But take the 22km ascent from the Aude up to the Col du Linas, the high-point of the route at 667m. Crunch the numbers and you’ll see that the gradient averages about 2.5%: we’re not exactly talking the sort of climb that would trouble Chris Froome. Along the way you’ll pass through the Roman spa of Rennes-les-Bains and the UFO centre of Bugarach (we’re not making this up) before reaching the summit. Here, the looming outcrop of the Pic de Bugarach, the highest point in the piémont Pyrenéen, pierces the clouds one kilometre to the south.

The route isn’t yet finished, so in several places you’ll be making your way without the aid of signs. There are so many quiet roads in this part of France, however, that it’s not hard to plan an attractive tour. We’ve filled in the gaps along the lines of the projected final route; use our maps and GPX downloads to find your way.

A fit cyclist could do this in a week, but make sure to plan your overnights carefully: the biggest climbs come in the final few days.

Challenging in places, but not impossibly so. There’s significantly less climbing per mile than (say) a comparable British cycle route like Lon Las Cymru or the C2C. There are three really significant hills, but since much of the route is railway path or valley road, you’ll climb the first 400m without getting out of the saddle.

Most of the route is on-road, but it also includes gravel rail-trails and occasional sections of potholey roads. You’ll be fine on a road bike as long as your tyres are hard-wearing and not too narrow. The roughest section is between Lourdes and Tarbes, where there’s no signposted route, and the quiet alternative follows bumpy farm roads. Confident cyclists can follow the N21 and D921 here, which are busy but have painted bike lanes.

Partly. Different départements have approached the route with varying degrees of enthusiasm, which means there are several missing sections. We’ve filled the gaps with recommended road routes, avoiding busy traffic and steep hills where possible. These follow the intended eventual course of the V81 route: you could take a more direct route if you like, particularly between Lourdes and Montréjeau. Whatever you choose, you’ll definitely need to take a map and/or GPX track.

TGV trains run to Biarritz and Perpignan stations, but booking a bike on can be hard, verging on impossible. Your best bet is piece together an itinerary using the older Intercités trains (booking required) and regional TER trains (booking generally not required). Freewheeling France has an excellent, and regularly updated, guide to taking bikes on French trains. 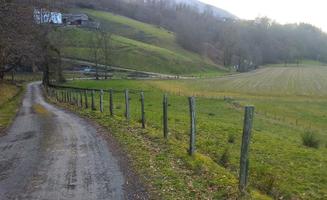 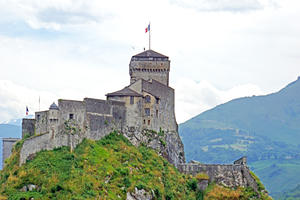 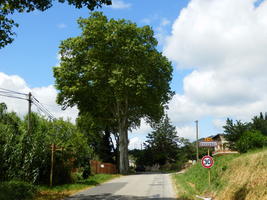 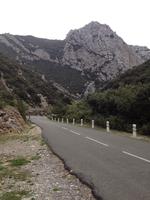 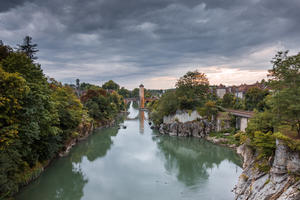 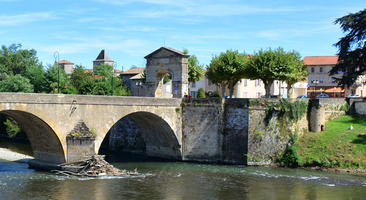 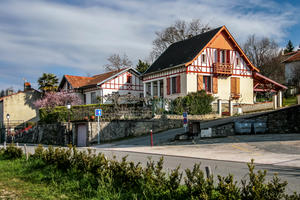 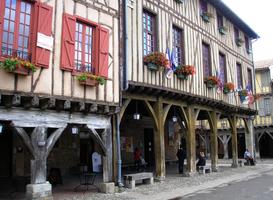 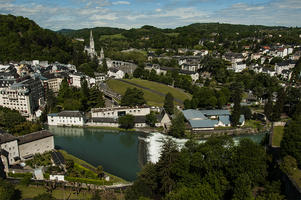 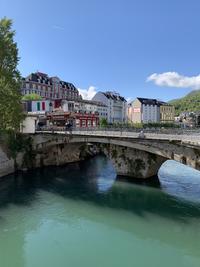 I did this trip in August of 2022. I write this now on 1/2/23, four months after the trip but my memory of this great experience is just as fresh…

We did this route in June 2022 and had a wonderful, memorable time in a lovely region. Given that it is the Pyrenees, the cycling was largely easier than we had expected, although there were some challenging days. What increased the challenge was the heat. We just happened to be there when a heatwave hit Spain and southern France, with temperatures one day in the low 40s C. Far too hot for cycling.

There were a gratifying number of traffic-free sections, including longish old rail tracks. Where we were sharing with traffic, it was mainly light and courteous, and often with a designated cycle lane. The French authorities have invested a lot of money on this route, and it is fairly well signed as V81 right through.

We were rarely far from a town or village, and there were plenty of places to stay and eat. We had planned to camp, with the occasional night in a cheap hotel or Airbnb. We abandoned camping in the heat, and ended up spending 13 nights in hotels etc and 8 camping.

We would recommend this route for cycle-tourists with some experience. The first couple of days for so are fairly flat and the first significant climb comes near Capvern-les-Bains, towards the middle. Pau was a lovely, interesting place; Lourdes we found the opposite. After Saint Girons, when the terrain looked as though we were going to start climbing, we joined a flattish long old rail trail.

The stand-out day was the climb to Col du Linas and then the descent through Les Gorges du Galamus. We were a bit spooked by the talk of the 22km climb to the col, given the weight of our bikes. But it was not difficult - just a steady long climb. The reward was descending through the amazing gorge on the other side. The unexpected difficulty was the following day, down to the Med. It was probably the most testing in terms of ascent; the more so because we had not anticipated it.

We took the ferry from Plymouth to Santander and used Spanish coaches to Irun on the French border.  They are fairly easy to book on-line.  They charge an additional 10 Euros for transporting bikes, and expect the front wheel off and the bike wrapped. We bought bin liners and taped them on, and they seemed happy with that.  We cycled from Irun to the start of this route at Biarritz and at the end continued to Carcasonne and returned to Bayonne on French local trains. The SNCF (French railway) phone app is excellent (and available in English) and we made bike reservations on that.

The budget hotels / Airbnbs were good, and always found places for our bikes. And almost everywhere we felt welcomed as cycle-tourists. Despite it being a recognised long-distance route, we didn’t see a lot of other cycle tourists. That deserves to change, especially given the level of investment into the trail infrastructure.

We kept a blog of the trip:-  https://www.crazyguyonabike.com/doc/pyrennes2022

Thanks, Richard, for promoting this route, and for the great web-site.