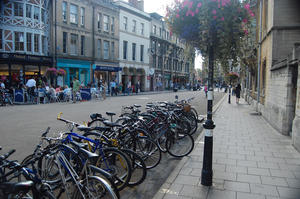 Oxford Oxford may be one of Britain’s great cycling cities, but its cycle infrastructure is patchy at best. NCN 5 takes quite the best way through it, though: start by the Westgate Centre and pedal north, dodging tourists and shoppers on New Inn Hall Street. Eventually the route leads through the Bohemian suburb of Jericho and well-to-do North Oxford before coming out on the canal towpath at Wolvercote. The towpath surface is a little bit corrugated and overgrown, but avoids two lethal roundabouts. From the suburban village of Yarnton, there’s a wide cycle track beside the busy A44 all the way to Woodstock. 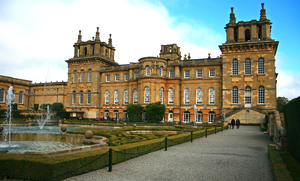 Woodstock (8mi) Blenheim Palace dominates the little town of Woodstock, and the entrance is just off the route. Admittance is fairly pricey, but you can cycle a short way up the drive for free! Woodstock itself is full of cafés (there’s a particularly good one at the Oxfordshire Museum) and pubs for refreshment.

An occasionally bumpy traffic-free track, Dornford Lane, heads north from here for three miles. By the time you emerge from its wooded stillness, you’re deep in the rural Oxfordshire countryside on some delightfully quiet lanes. Perhaps the best is after the village of Over Worton, a gated road where you coast downhill between fences. The approach to Bloxham is a bit busier: keep your eyes on the signs through Bloxham village as navigation can be confusing. 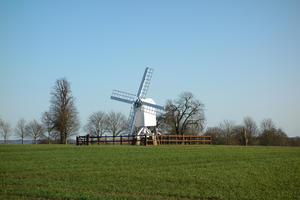 Banbury (28mi) After Bloxham, follow the lane due east until the farm at Bloxham Grove, where you turn left through a gate. (The signs here have a habit of going AWOL.) The route gets no closer to Banbury than the village of Bodicote, skirting the town on a tree-lined path, the Salt Way.

The tracks between Banbury and Sibford Ferris can be rough and muddy, especially in winter. If it’s been raining or you’re on a thin-tyred bike, consider taking the busier parallel road via Shutford. For those with an adequate bike, it’s a fun ride through quiet countryside.

Tiny lanes take NCN 5 to the Warwickshire boundary at Traitor’s Ford, where you can clean the mud off your wheels! This is the River Stour, whose valley we follow to Shipston-on-Stour, skirting the bulk of Brailes Hill. 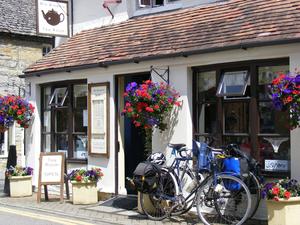 Shipston-on-Stour (45mi) Shipston is a bustling country market town, with a pub around every corner and a traditional market place which, bizarrely, has two Co-op supermarkets just two doors from each other… evidently they couldn’t (ahem) co-operate.

The climb out the town is busy and the crossing of the A429 a little hazardous. But after that come five of the finest miles of the route, rural roads skirting the very north of the Cotswold escarpment. The signs take you on a scenic loop of Ilmington village, passing streets with names like Frog Lane, Foxcote Hill and Grump Street. (For a long circular tour, you can turn left anywhere along here and you’ll end up on NCN 442, the Cotswold Line route back to Oxford.) 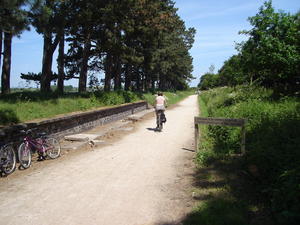 Long Marston (56mi) The Stratford Greenway is the finest traffic-free section on this route, one of Sustrans’ signature rail trails. This was formerly the line from Stratford-upon-Avon to Cheltenham. The southern section of the route (from Broadway to Cheltenham Racecourse) has been reclaimed as a steam railway; the central section is partly overgrown trackbed, partly a little-used freight siding; and the five miles into Stratford are open to us as NCN 5.

It’s an easy ride along a firm gravel surface, popular at weekends with families. An old railway carriage has been repurposed as a café/greasy spoon which might not serve you an organic smoothie but does a fine sausage bap. Approaching Stratford, the route crosses the Avon on the old railway bridge before skirting Stratford Racecourse. 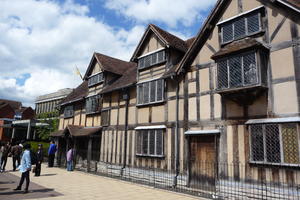 Stratford-upon-Avon (61mi) NCN 5 doesn’t go into Stratford town centre, instead following the old trackbed until just shy of the railway station. But if you want to explore this ever-touristy but still pleasant town, follow the NCN 41 signs from the main road roundabout, which will take you to the Royal Shakespeare Theatre, riverside and canal basin. From there, you can continue up the canal towpath until you rejoin the cycle route.

The main route ducks onto the towpath further up, via a couple of town streets. The Stratford Canal is one of England’s most scenic and it’s a shame that more of it isn’t suitable for cycling. Still, this short section to Wilmcote is pleasant enough, passing a busy flight of locks with great views behind you over Stratford and the Avon valley.

Country lanes continue the route to Redditch and Bromsgrove. There’s a picture-perfect ford at Coughton, with a pedestrian bridge if you don’t fancy wetting your wheels. Redditch is a New Town with pleasant parkland cycleways, after which you’re on town streets before briefly re-emerging into the countryside and crossing another canal (the Worcester & Birmingham). 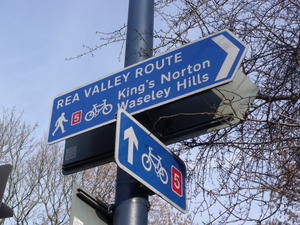 Bromsgrove (88mi) There have been ups and downs in the past 85 miles, as you’d expect for a route around the northern Cotswolds. But the biggest climb was always going to be the one up to the Birmingham plateau, and that starts here, after Bromsgrove. Railway buffs know this as the ‘Lickey Bank’, so tough that an extra engine was traditionally stabled by Bromsgrove station to help up any trains that couldn’t make the grade.

The cycle route is a steady ascent between the end of Bromsgrove and the beginning of the Birmingham conurbation. There’s a popular café halfway up at Lizzie’s Farm; the half-mile after this is the hardest, with a 10% gradient at times, but once you reach the city streets it’s plain sailing.

The route through southern Birmingham links a series of enjoyable traffic-free paths along the Rea Valley. At one point you’ll follow the canal for a mile: you can continue on this to the city centre if you like, thanks to a recent towpath upgrade. But the official route is a good ride, emerging into the city centre near New Street station. The parks can be busy at weekends, so do watch out for kids and dog-walkers. 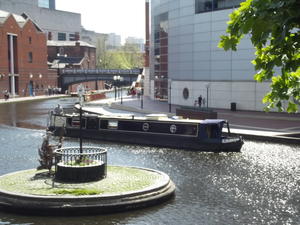 Birmingham (106mi) NCN 5 continues to Holyhead – but for now, the best place to finish is the canalside Arena Birmingham (aka the National Indoor Arena). The restaurants and pubs of Brindleyplace and Broad Street are a few yards away, a suitable place to toast your 100-mile ride from Oxford. Birmingham is rapidly becoming more cycle-friendly under the influence of the new West Midlands mayor, and with its roadside cycleways, canal paths, and park routes, England’s second city is a great place to explore by bike.