Turn left (north) by the King’s Arms pub, following the signs for route 51, and thread through the affluent suburbs of North Oxford. The route passes the Cherwell School, where more pupils cycle to school than anywhere else in Britain. This is largely thanks to a truly outstanding Dutch-style cycle track, though we’re headed in a different direction.

Kidlington (5mi) The pleasant suburbs eventually land you on a standard-issue roadside cycle path, taking you to Kidlington, the self-described largest village in England. To avoid an uninspiring detour through residential areas, stay on the main Oxford Road as far as Green Road, then turn right to rejoin the route.

A lovely meadowland path, across land owned by Richard Branson, leads into the undulating Oxfordshire countryside. After four miles on remote country lanes, the approach to Bicester follows a minor road running parallel with the busy A34. It’s safe, if not exactly peaceful. 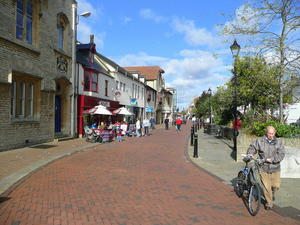 Bicester (16mi) If you want to visit the market town of Bicester – a pleasant though exasperately cycle-hostile town – follow the route 51 signs. Otherwise, for a more direct ride, continue along the car park for the chic Bicester Village outlet centre, pass the railway station, then pick up the signed alternate route by the level crossing.

Launton (19mi) After the village of Launton comes Poundon Hill, the second climb of the route and one offering views for miles. The business park at the top was once a secret intelligence station, from where MI6 kept tabs on the Warsaw Pact. These lanes are fine cycling country, grouped into a bewildering network of little loop routes by the National Byway, whose logo shares sign space with route 51. Keep following the NCN through Steeple Claydon, a bustling village with a bakery, pubs, a café, and pretty cottages at every turn.

Winslow (32mi) The popular market town of Winslow follows soon after, clustered around the market square – used as a cattle market until 2007. If you’re giving three days to the route, Winslow is an excellent choice for your first night’s rest.

Since Bicester, the route has clung close to the old Oxford–Cambridge railway, mostly disused though with some track still in situ. A quiet traffic-free lane runs directly alongside it for a mile, before the gravelly Weasel Lane takes you to the edge of Milton Keynes.

Milton Keynes (43mi) MK has a dense network of cycleways, known as ‘redways’ after the colour of their tarmac. Route 51 follows these north to Central Milton Keynes, its station and shops, before proceeding south on a riverside path. You can shave four miles from your ride, however, by skipping central MK entirely for a simpler west-east route. It’s a surprisingly green town, with parks planned into the urban fabric. The ‘Rose’ art installation, and the Beacon viewpoint, add interest to the sweeping ride through Campbell Park.

Marston Moretaine (58mi) The Marston Vale between MK and Bedford is a curious area, dominated by worked-out quarries and commuter villages. A valiant attempt to create the Forest of Marston Vale does battle with ‘distribution hubs’ and landfill sites to claim this land. There’s some enjoyable riding, but it’s far from the highlight of the route.

Should you want to skip it, this is one part of the Oxford–Cambridge railway which survives; you can pick up an all-stops train at Bletchley and take it to Bedford. Alternatively, you can speed your passage by short-circuiting the loops into Marston Moretaine and around Wootton. Road bikers will want to avoid the unmade bridleway after Cranfield in any case, simply continuing straight on to rejoin the route at Upper Shelton.

Marston itself is a busy village with pleasant cycleways beside the gravel lakes, and a café for a cake stop. The station at Millbrook is a short way off-route but worth the detour for its delightful branch line air. At Wootton, the route is particularly indirect, but these quiet lanes via Hall End are much more enjoyable than the main village road. 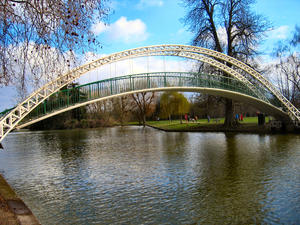 Bedford (67mi) A nondescript roadside cycle path brings you to the River Great Ouse at Bedford. The riverside path is one of the highlights of the Oxford–Cambridge ride, and Bedford’s elegant waterfront is the ideal place to stop for a coffee. Be careful when heading under the railway bridges, though: headroom is barely 5ft!

From Bedford to Sandy, the route follows a very enjoyable railway path close to the Great Ouse – indeed, at one point, you’re right by Willington Lock – and across the fields. It’s all tarmac apart from one muddy section, though tree roots have occasionally disrupted the smooth surface. Regardless, it’s enjoyable riding, especially with the wind at your back.

Blunham (74mi) In Blunham, a missing railway bridge takes you onto residential roads for a minute. Instead of returning to the cycleway, go left here, uphill into the village. Then, at the T-junction, turn right to join the National Byway. This country lane route provides a more direct and still very enjoyable route into Cambridge, avoiding the long detour via Huntingdon. The route is signposted with clear brown signs, but since the National Byway doesn’t have the dedicated volunteers of the National Cycle Network, these do sometimes point the wrong way or go missing entirely. Keep a map to hand.

Gamlingay (81mi) The villages of South Cambridgeshire are the prettiest on the route, each one with a pub and a parish church. Look out for the trackbed of the old railway, now entirely lost, after Gamlingay. 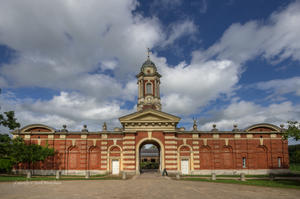 Wimpole Hall (89mi) Crossing the Roman road at Arrington, you squeeze past an ornamental iron gate into the grounds of Wimpole Hall. This National Trust-owned stately home is the biggest in Cambridgeshire, an imposing pile that attracts thousands of visitors on summer weekends. As a cyclist, you have a prime view with no need to queue for the car park; simply sail past on the tarmaced track, though watching out for the cattle grids! The NT farm and stable cafés are perfect refuelling stops for the last leg into Cambridge.

Barrington (94mi) Follow the National Byway to the implausibly pretty village of Barrington, strung out along one wide road. Leave the Byway here and continue towards Haslingfield and Barton, crossing the old railway for one last time: the Mullard Radio Astronomy Observatory is built on its line, making reinstatement unlikely.

Cambridge (102mi) In Barton, turn right onto the main road and join the cycle path which runs all the way into Cambridge. In the well-to-do suburb of Newnham, bear straight on when the road swings left (after the church and Red Bull), then turn left after crossing the River Cam. This busy cycleway will take you right into the heart of the city – just follow the hundreds of bikes!