Central London If we’re claiming this as an “iconic” ride, let’s go full cliché and start at London’s tourist mecca, Buckingham Palace. It couldn’t be easier to ride to, thanks to the new East-West Cycle Superhighway 3.

The first three miles are all busy roads, though with lots to see. Ride all the way round past the gates, and follow Buckingham Gate along the southerly wall of the palace. Keep going, dodging the buses at Victoria Coach Station, all the way to the grounds of the Royal Hospital. Turn left to cross Chelsea Bridge and keep going down the busy Queenstown Road.

Looking for a detailed map? Here’s a large-scale PDF of the London section. 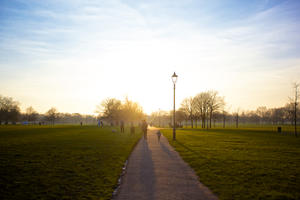 Clapham Common (3mi) The first sight of greenery is Clapham Common. Continue straight on along the cycle path that crosses the Common. The junction at the end is truly horrid (it’s nominally on Cycle Superhighway 7, but you wouldn’t know) and our honest advice is to dismount, walk your bike across to the far pavement, pass Clapham South tube, and turn left after the Sainsbury’s onto Hazelbourne Road. Turning right at the end onto Cavendish Road takes you all the way to Tooting Common and more greenery. (Watch out for pedestrians!)

Streatham Common (6mi) From here, a couple of little residential streets (check the map) take you to the B272 at Streatham Common station. We’ll follow this for four miles: it’s a fairly busy road but direct and easy to follow. After you cross the A236 at Mitcham Common, a new cycle path is being installed (2018) which will make this a much more appealing route. 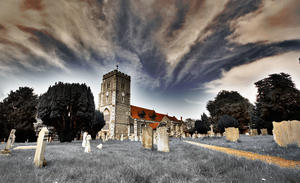 Beddington (10mi) Turning left in Beddington onto Guy Road takes you past the church onto a series of residential streets – again, follow the map – and the first climbing of the day. These come out onto the busy but wide A237, which we follow for two miles to Coulsdon. Here, we meet the Avenue Verte cycle route (NCN 20) and – at last! – the countryside begins.

Coulsdon (15mi) We called Farthing Downs “glorious” in our guide to the Avenue Verte, and it truly is. Sure, there’s a climb to get up there, but this beautiful, unfenced downland, with views all around, is a real highpoint – literally. The feeling of release as you escape London suburbia is palpable.

The little winding, wooded lane takes you through Chaldon and onto an enjoyable descent past the M25. If you’ve got a bike with decent tyres, turn left straight after the motorway at the National Cycle Network sign, following route 21 on a narrow path, through a farmyard and along a traffic-free access road. When NCN 21 turns left through a gap in a hedge, continue on Place Farm Road to Bletchingley. (Road bikers should ignore NCN 21, carry on down the hill, and turn left at the bottom onto Merstham Road for Bletchingley.) 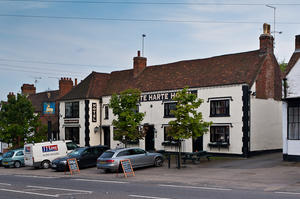 Bletchingley (22mi) Bletchingley has a well-to-do, picturesque air that characterises the best of Surrey, despite the constant traffic of the A25. There’s a couple of village shops here, and a boutique tea-room, Lamingtons. It’s not cheap (and they don’t take cards), but the cakes are magnificent. An unmissable stop.

There are two pubs here, too, but the Bell at Outwood (three miles further on) is a better bet. The National Trust’s Harewoods Estate here is a little piece of 19th century stockbroker affluence preserved in aspic. Turning left past the privately-owned windmill, a series of lanes lead us towards East Grinstead.

East Grinstead (29mi) Here, there are two short off-road sections. These avoid the worst of the busy roads round here and, we think, make for a much more enjoyable journey than any of the alternatives. Unless you have the skinniest of tyres, we’d strongly recommend this route. (But if you’re a dedicated tarmac-only cyclist, you’ll want to make your own way, either via Turners Hill or East Grinstead.)

At the busy B2028, dogleg left-then-right to Stubpond Lane – it’s easy to miss it. This becomes an unpaved lane for 500 yards, with a firm but uneven, potholed surface. Then the surface hardens, the woods drop back, and you pass by a fishing lake, and it’s suddenly worthwhile.

Crossing over the A264 to Rowplatt Lane, another short left-then-right dogleg takes you onto a bridleway with a National Cycle Network sticker on it. This is rougher than Stubpond Lane, still firm, but with a bumpy layer of stones. It’s only half a mile, though, and at the top you reach a crossroads where a concrete farm track heads left. Follow this until you reach Imberthorne Lane, where we turn right.

(Avenue Verte cyclists shouldn’t turn at the crossroads, but carry on to reach the Worth Way and rejoin the Avenue Verte.)

Saint Hill (33mi) Beautiful country churches are one of the pleasures of touring in the English countryside. Imberthorne Lane has something quite different: Saint Hill Manor, the UK headquarters of the secretive Church of Scientology. It also has a few too many cars for our liking, so presumably the Scientologists don’t believe in “biking to Holy Communion through the morning mist”, to quote George Orwell.

Still, the traffic soon recedes and the lanes become quiet once more. The Bluebell steam railway runs parallel to the west, and the occasional hoot of steam trains adds to the secluded country air. After crossing the infant River Medway, the toughest climb of the route so far leads up to a crossroads where there are panoramic views over the South Downs. These narrow, lightly-trafficked lanes provide some of the most enjoyable cycling of the route so far – helped by the long descent, of course! 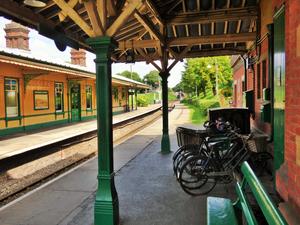 Horsted Keynes (40mi) We skirt the edge of little Horsted Keynes, though it’s only a few yards’ detour to the village shop and pubs. There’s an enjoyable alternative route through Broadwood Manor a short way to the east, marked as a red-edged cycleway on our map.

Similarly, we avoid busy Haywards Heath a few miles on. (Take care on the dogleg over the busy A272.) The narrow Slugwash Lane meanders quietly towards Wivelsfield. By now, it’s hard to ignore the looming ridge of the South Downs, and our assault on it by way of Ditchling Beacon.

Streat (49mi) There’s a few more miles of unhurried rural riding yet. There are half a dozen north-south routes here by which to approach the Beacon, and we’ve chosen the quietest: Streat Lane. It’s signposted as “Narrow Road” at its northern end, which discourages the traffic. At the tiny village of Streat, do visit the 11th century church, then nip round the back on the gravel track to find Suzy’s Streat Food – a wayside food shelf with an honesty box. You’ll find glorious home-cooked cake here… perfect for refuelling before the big climb. 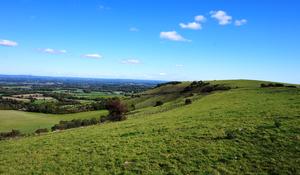 Ditchling Beacon (53mi) Underhill Lane is the road that runs beneath the escarpment, first a moderately busy B road, then a pleasant narrow back street. But there’s no putting it off any longer.

Ditchling Beacon climbs 140m (almost 500ft) in under one mile. It’s not a steady climb, lulling you into a false sense of security as the gradient occasionally eases off, only to twist round a bend and hit you with a 16% beast. The turns aren’t quite Alpine hairpins but nonetheless prevent you from seeing how far you have left to go – “are we nearly there yet?” being your constant mental refrain.

It’s a narrow two-lane road with few places to stop and catch your breath, just the occasional storm drain where you can stand aside from the traffic. Fortunately, cyclists are such a common sight here (whether riding or pushing) that the drivers are mostly considerate and patient. As for your fellow cyclists, there’s a certain camaraderie in the suffering – expect a few words of encouragement from the lean, Lycra-clad roadies passing you on their carbon-fibre dream machines!

When the trees fall away on your left side and the views open up, you know you’re almost there. Another hundred yards, and you can stop by the signpost where the South Downs Way crosses the road, lean your bike against the wire fence, and enjoy the vista. It’s not quite downhill all the way from here, but nothing will seem hard now.

Ditchling Road (56mi) The next two miles on the crest of the downs, undulating and exhilarating in equal measure, will pass in a flash. Cross the busy A27 road to continue along Ditchling Road into Brighton (signposted Hollingbury): this isn’t the traditional L-B route, which follows Coldean Lane and the Lewes Road instead, but we think it gives a better entrance to Brighton. There’s a good cycle path on the right-hand side for the first mile and a half.

Before long, the hipster pubs start, the traffic lights and buses come and go, and you’re careering down to the coast. 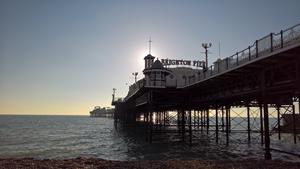 Brighton Pier (60mi) A slightly complex maze of cycle paths provides a safe route past Victoria Gardens and the Pavilion, but as long as you keep pointing in the right way (downhill) you’ll be fine. And there it is: Brighton Pier, the beach, and a chance to ceremonially dip your wheel in the English Channel.

Train home? Follow the seafront west then cycle up West Street to the station. Better, stay in the town, eat, drink and relax for a few hours. After that hill, no-one can say you’ve not earned it.