Shrewsbury Enclosed by a loop of the River Severn, Shrewsbury is a bustling Border town with an interesting mix of architecture. Lon Cambria begins on the busy riverside path before heading off on residential streets and roadside paths – not the most interesting of exits, but reasonable enough. A three-mile haul on a B road leads to Montford Bridge, and ten lovely miles of easy lanes through the Severn Valley. 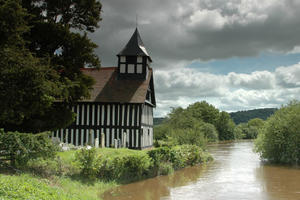 Long Mountain (15mi) Wales begins at Crewgreen – and so do the hills. The tough but short ascent of Breidden Hill is followed by the ascent of the Long Mountain, a great bulk topped by quiet lanes which give excellent views on a clear day. This is the hardest single climb of the whole route, so take your time. The descent into Welshpool is steep, winding and exhilarating; not to be attempted with weak brakes!

Welshpool (27mi) Famous for its cattle market, Welshpool is essentially a one-street town with an unhurried air. The Montgomery Canal runs through the town – and Lon Cambria follows it all the way to Newtown.

The canal towpath was improved in 2013 to make a very pleasant level route, replacing the former journey up hill and down dale. You won’t see many boats: though much of this section has been restored to navigation, it’s cut off from the main canal system by a dry section around Llanymynech, so the only way for boats to reach it is via low-loader. South of Berriew, the canal is largely unrestored, but Lon Cambria follows the towpath regardless.

Newtown (40mi) Newtown is often maligned as the most workaday of the Border towns. In fact, there’s much to explore here, with its main street falling attractively to the Severn bridge. The Sportsman (the Monty’s Brewery tap) and the tiny Railway deserve a visit if you’re stopping overnight. 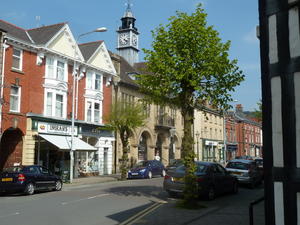 Llanidloes (56mi) More quiet, hilly lanes take the route through Caersws – the last sight of the railway until Aberystwyth – and onto Llanidloes. Nicknamed ‘Planet Llanid’ for its mildly hippy vibe, this is a friendly, sleepy town with old-fashioned cafés and pubs. Here we meet Lon Las Cymru, Wales’ north–south cycle challenge. The two routes share the same path to Rhayader.

Llangurig (61mi) First comes a long, surprisingly tough climb from the Severn Valley to the watershed, then a steep descent into the Wye Valley at tiny Llangurig. The best bit, though, is the astonishingly rural 10-mile run down the valley into Rhayader, a contender for the finest road on the National Cycle Network. (At Llangurig, you can also choose to miss out Rhayader completely by heading west on Route 818: stunning views, but a steep climb and rugged surface.)

Rhayader (71mi) Rhayader reputedly has more pubs per head of population than anywhere else in Britain; don’t try to sample them all in one evening. It’s a quiet, friendly place centred around an attractive central cross… which has the misfortune of hosting two major A-roads. 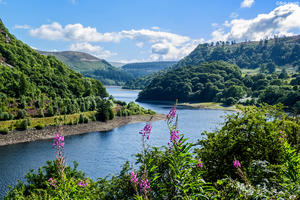 Elan Valley (75mi) The next 15 miles might look circuitous on the map, but there’s a good reason. The traffic-free cycle path follows the shore of the Elan Valley reservoirs, with stunning views to the imposing dams. It’s a steady, gentle climb, only really taxing at the turn above the highest reservoir onto the mountain road. From here, you feel like you’re on top of the world as you slowly cross from the Elan to the Ystwyth valleys.

It’s pretty much downhill all the way from here: 24 miles of easy descending all the way to the sea.

Cwmystwyth (92mi) There’s a bumpy, gravelly forest path after Cwmystwyth which is quite enjoyable, but you may choose to stay on the quiet B road instead. A laughable scramble (where you will have to push your bike) takes you up to the old railway from Carmarthen; Lon Cambria will intermittently follow this into Aberystwyth, including the final approach to the town itself.

Aberystwyth (112mi) The route ends by the pier; rest at one of the seaside cafés and raise a glass to your ride across the heart of Wales. You can catch a train home here, or maybe retrace your steps to tackle Lon Teifi.