The Loire is France’s longest river, and the Loire à Vélo is France’s most popular bike route. 600km of level cycling with very little traffic and a steady stream of cathedral cities, historic riverside villages and those châteaux… relaxed riding doesn’t get more scenic than this.

And it’s more varied than you might think. This is no towpath ride, but rather, an intricate chain of levee roads, cycleways, and tiny rural lanes. As you loop through medieval city streets and across sturdy bridges, the one constant is that you’ll see more bikes than cars. That means the campsites, hotels and cafés en route are all geared up to welcome cyclists.

The keen cyclist will want to ride the whole route in one go. But its flat, low-traffic nature makes it ideal for families and first-time riders too, and with good rail connections, shorter trips are easy. Check out our stage-by-stage guide to see which section takes your fancy!

You’ll see more types of bike on the Loire à Vélo than you believed existed. Road bikes, tourers and MTBs, sure: but also cargo bikes, tandems, recumbents, trailers of all shapes and sizes…

The great majority of the route is paved. Where it isn’t, it’s generally good quality gravel. Sometimes the unpaved sections have a formal on-road alternative route; otherwise there’s invariably a D road down the valley that you can follow. Regardless, whatever bike and whatever tyres you have, you’ll be fine.

Entirely up to you. A fit cyclist could do the full 600km route in a week. A family might want to take two weeks or even longer. Don’t just divide the distance by the number of days, but also think whether you want to spend time exploring châteaux, cities, and the lovely villages on the way. You don’t have to do the whole route, of course; and with numerous alternatives and connecting regional routes, it’s easy to piece together a circular ride for a few days.

Yes, absolutely. The gradients are always gentle; there’s only one exception we can think of, at Amboise. The traffic is light and the paths are wide. There’s a lot to see and plentiful accommodation, so you don’t need to stick to a rigorous schedule.

Can you ride further upstream?

Yes, absolutely. The formal Loire à Vélo route ends at Nevers, but heading upstream, you can follow EuroVelo 6 on a similar combination of minor roads and cycleways as far as Digoin, 120km further on. From here EV6 heads away to ultimately form the Danube cycle route, while an excellent new voie verte on a railway trackbed follows the Loire valley up to Roanne.

That’s it for formal cycle infrastructure, but the roads of the valley, if anything, get ever more scenic as you head upstream. You’ll find yourself climbing the sharp valley sides much more frequently as you head past Saint Just Saint Rambert on the way to Le Puy-en-Velay, and inevitably some of the roads can be busy. The source of the river is Le Gerbier de Jonc on the edge of the Auvergne.

Which direction should you go?

East-to-west (downstream) or west-to-east (upstream)? There’s honestly not much in it. Cycling downhill sounds appealing, but in reality, the gradient is so gentle that you won’t notice the effect in either direction.

The wind is likely to be more of a consideration, and it’s more often from the west than from the east. So we’ve written our guide heading upstream, from the Atlantic to Nevers. Keep an eye on the forecast and be prepared to reverse the direction of your ride if really necessary.

If you’re arriving from elsewhere in Europe (including Britain via Eurostar), you will almost certainly find it easiest to travel from Paris – France’s rail system is quite ‘radial’ in operation.

Should you want to return to your start point by rail, there’s a handy Intercités service between Nevers and Nantes. It follows the Loire for the western part of the route, but cuts cross-country to avoid Orléans.

British visitors may be arriving at a Channel port. Caen (for ferries from Portsmouth) is probably the best connected by TER: there are daily direct trains to Tours, or one change for Nantes or Angers. Caen station is an easy 15km bike ride (under one hour, traffic-free) from the port at Ouistreham. You can also get from Saint Malo to Nantes or Angers with a single change.

Almost all major towns and cities along the route have rail stations – but not quite. Exasperatingly, there isn’t quite a railway along the full length of the route. The line from Gien to Orléans is long gone, but Rémi bus route 3 runs every day on this stretch and carries bikes.

From June to September, a special ‘Train Vélo Loire’ operates between Orléans and Saint Nazaire. Each train can take up to 80 bikes, there’s a porter to load your bike on and off, and you can even take a tandem. It doesn’t get much better than this!

What about the bridge at Saint Nazaire?

Ah, yes. There’s no station at Saint Brevin les Pins, so you’ll need to cross the Loire from/to Saint Nazaire. Anywhere else this wouldn’t be a problem, but the Loire is… rather wide at this point. There is a, quite frankly, breathtaking viaduct but only the very brave will consider cycling it.

In the peak summer months, and at major festivals, a free shuttle bus runs across the bridge for cyclists (and pedestrians). It picks you up at Rue de la Loire in Saint Nazaire, or Place Bougainville in Saint Brevin. The bike trailer will only accommodate standard bikes, not tandems and the like.

There’s also a regular bus, LILA service 17; booking is required for bikes. Taxis in the area are also accustomed to carrying bikes.

Alternatively, it’s just a 20km (12mi) ride to the little town of Pornic, which is at the end of a branch line from the main station at Nantes. 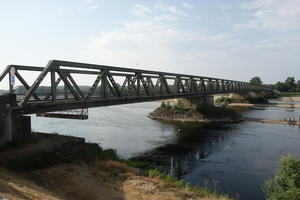 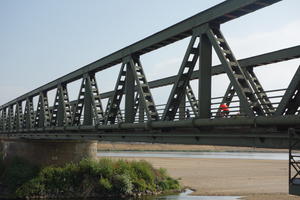 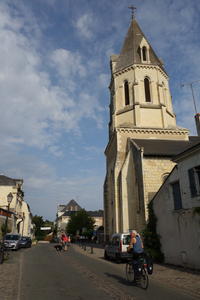 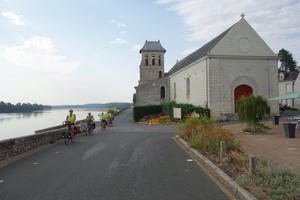 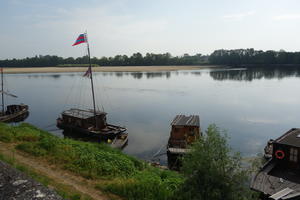 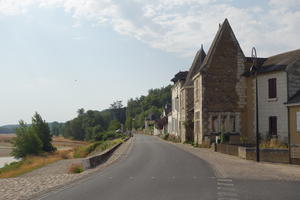 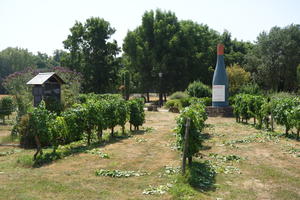 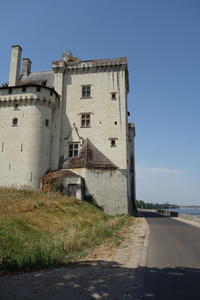 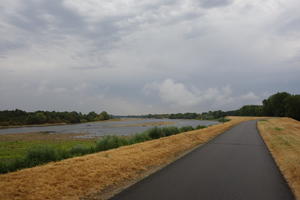 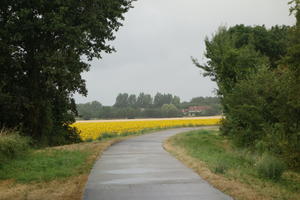 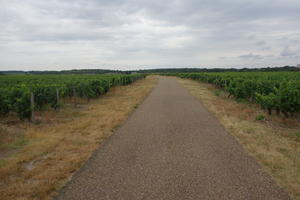 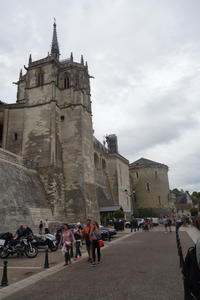