Reading The Kennet & Avon Canal takes a curious course through Reading. It’s actually the River Kennet at this point – indeed, the Kennet meets the Thames one mile west of Reading station. But the ‘natural’ river has been corraled into an artificial course through the Oracle shopping centre, with traffic lights to regulate the movement of boats through the town.

You can cycle through the town to join the towpath at the Oracle, or do the completist thing by starting on the River Thames. Whichever, keep an eye out for National Cycle Network route 4 signs; this is the number you’ll be following all the way to Bristol. (You’ll also see route 5 beside the Thames, which runs from here to Oxford and beyond.)

After a brief diversion on residential streets, the towpath strikes out into the flat Berkshire countryside. The ‘K&A’ (as it’s universally known) is a particularly interesting canal for those with watery interests. It fell into dereliction after the Second World War, and was only reopened in 1990 after a mammoth volunteer restoration campaign. Even then, it was hardly in pristine condition, and required a £28m Millennium grant to ‘finish the job’. 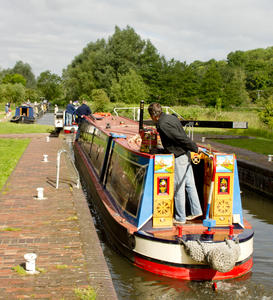 Woolhampton (13mi) The towpath is mostly solid, compacted earth, though there’s a short gravel path diversion before the M4 crossing. The Rowbarge at Woolhampton, 13 miles into the ride, is a good place to sit and watch the boats go by. (It’s now an outpost of the highly regarded Cheshire-based Brunning & Price pub company, so not a bad spot for lunch.)

In Thatcham, the official route follows cycleways along suburban streets. The towpath is more attractive, passing the turf-sided Monkey Marsh Lock, but the surface can be muddy and is best avoided after rain.

Newbury (20mi) The route returns to the towpath until Newbury, where the canal runs right through the pedestrianised town centre. Three rural miles on, and the route leaves the canal at Benham Lock. Despite the bright blue metal sign, it’s easy to be lulled into the rhythms of towpath riding and miss the turn. After a sudden climb out of the Kennet valley, country lanes take you to attractive little Kintbury, with its village stores and pubs, before the canalside town of Hungerford. 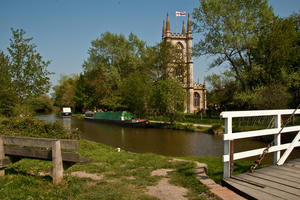 Hungerford (29mi) Though the 32 miles from Hungerford to Devizes are all on country lanes rather than traffic-free towpath, it’s far from a second-class section of route. True, there’s a little more climbing to do, particularly either side of Burbage – close to the summit of the canal.

Cycling through quiet Wiltshire villages is a delight in itself, and a welcome contrast to the isolation of the canal. The thatched pubs, stone cottages, rolling pastureland and wooded lanes make this a delight on sunny summer days and autumn evenings alike.

Hungerford, too, is an attractive little town. Its direct train service to London inevitably makes it popular with commuters, but its centrepiece High Street retains a small-town character with butchers and greengrocers rubbing shoulders with antique shops. The striking railway viaduct dominates the view downhill, especially when an express train rumbles across.

Bedwyn (35mi) The road runs close to the canal around the two immaculate Bedwyns (Great and Little). A little further on, at Crofton, the canal pump-house still stands proud; it’s in steam once a month during the summer. There’s a final railway station at Pewsey, together with a brace of shops. 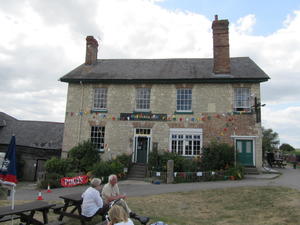 Woodborough (53mi) We’d suggest a brief diversion at Woodborough. Turn right instead of left at the T-junction, and after a mile you’ll arrive back at the canal and, more importantly, the splendidly eccentric Barge Inn at Honeystreet. An international centre for crop circle research, where “research” means “cider-fuelled speculation and implausible schemes”, it starred in the BBC’s Village SOS series as locals clubbed together to rescue their pub. Do visit, though we can’t guarantee that you’ll be in any fit state to get back on the bike afterwards. 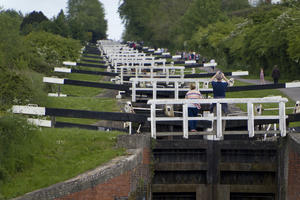 Devizes (62mi) Returning to the route, the winding lanes take a gentle course to the attractive market town of Devizes. Take an hour to venture away from the towpath into the town centre; the Market Place is especially fine, with buildings from the 15th to 19th centuries.

Back on the canal, the ride begins with the emblematic image of the Kennet & Avon Canal – the flight of locks at Caen Hill, Devizes. This is one of the steepest descents on the canal system, and the 16 broad locks are a tough workout for any boater. Going downhill on a bike is much easier, but do keep your speed down; several accidents have taken place here.

The towpath is better surfaced here than around Reading, and busier, too. It’s still rural, but feels less isolated than the summit section with boatyards and canalside pubs to provide interest. 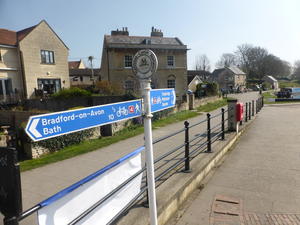 Bradford-on-Avon (74mi) Bradford-on-Avon is a famously pretty village, its narrow streets often crammed with tourist coaches. The towpath is barely less thronged, thanks to the popular café and pub. (There’s a bike shop here, too.)

From here, the canal follows the valley of the River Avon all the way to Bath. A 1920s traveller wrote that “The scenery of this canal from Bradford-on-Avon to the Dundas aqueduct surpasses anything this writer can adequately describe”, and it’s no less true today. The natural beauty of the valley is only enhanced by the elegant aqueducts at Avoncliff and Dundas. Perhaps unsurprisingly, many live-aboard boaters have made this section of the canal their home. The towpath can be a little cluttered as a result, but that’s no hardship – slow down and enjoy.

Dundas Aqueduct (78mi) Immediately after Dundas Aqueduct, National Cycle Network route 24 leaves to the left. For an alternative route to Bath, you can follow this, then after two miles, turn along the stunning new Two Tunnels route (NCN 244) on the subterranean line of the old Somerset & Dorset Railway. NCN 4 along the towpath more than holds its own against this competition, sharing the Avon valley with the mainline railway through pretty Bathampton. This is a very busy section of route, particularly at weekends. 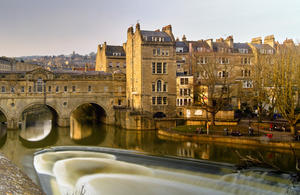 Bath (83mi) The Kennet & Avon Canal formally ends at Bath, and the natural River Avon forms the rest of the watery route to Bristol. Our cycle route changes, too. Instead of the towpath, it follows the Bristol & Bath Railway Path, a superb cycling highway between the two cities.

First comes Bath itself, where the route wisely chooses to plunge right through the heart of this architecturally marvellous city, even if there’s a little more traffic to dodge. Great Pulteney Street is stunning, a Georgian avenue leading to the famous built-up bridge over the River Avon. NCN 4 has its own one-way system through the city centre, so keep a careful eye out for the blue stickers. (Connoisseurs of bike media may spot the offices of Future Publishing, who once owned several top-selling cycling titles and still run bike websites; the rather good road-cycling site road.cc is also based in the city.)

The riverside path leads us to the incongruous start of the railway path at the Maltings Industrial Estate. From here, 13 miles of gentle cycling lead us straight to the heart of Bristol with barely a car in sight. You’ll see trains, though – part of the route is shared with the Avon Valley Railway, a tourist steam operation – and the occasional boat on the River Avon below.

Don’t be tempted to put your head down and aim for a speed record along here. Though bikes are in the majority, it is a shared path, and you’ll encounter walkers and nervous family cyclists along the way. 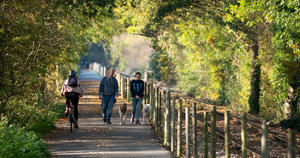 Bristol (100mi) Finally, the path deposits you on quiet city streets just a mile from Bristol city centre. The route is well signed from here to the harbour-front, which makes a fitting end to the ride. Take a picture of yourself in front of the nicely sculpted National Cycle Network map by the @Bristol centre. Bristol rightly calls itself a ‘Cycling City’, and there’s much to explore here; but if your time is limited, Temple Meads station is directly signposted from the cycle route.