But whereas the Tour riders approach from the west, on a road that reaches a lung-busting 13%, this cycle route never exceeds a much more manageable 7%. Still challenging, yes. But if you want to try a Tour climb without ‘race fitness’ – yet with the same spectacular mountain scenery – this route could be for you.

The V74 cycle route, aka La Grande Traversée du Volcan à Vélo, links the Lot valley with that of the Allier. With 2000m of climbing in its 160km length, it’s a route best suited to travelling light rather than lugging heavy camping equipment.

Scenically, it grabs your attention at km 0 and never lets go. The first leg is on quiet roads along narrow valley sides, eventually leading to Aurillac, capital of the Cantal département. From here the D17 has cycle lanes at first, but these drop away as the road narrows and the altitude increases. Should you need an excuse to stop for a rest, the strung-out villages of the Jordanne valley aren’t without charm, particularly their churches.

After Mandailles the gradient ramps up significantly, but so does the scenic appeal, and it’s an open question which will leave you out of breath first. Toast your success at the Pas de Peyrol with a drink at the Chalet du Puy-Mary, then settle in for the long descent.

It’s not all plain sailing from here: there’s another tough climb, albeit shorter, out of Allanche up to the Col de Baladour. The scenery shifts to wide expanses of green but still retaining a high-altitude character, dotted with wind turbines.

You may choose to end your tour at Massiac, which has a station, rather than the official finish of Blesle. The run in to Blesle is a lovely quiet road which makes a fitting end to the ride, though, and Blesle itself is a picturesque, closely-packed little village.

At 160km (100mi), this is a two-day route for experienced cyclists, or three days if you’re less confident in your climbing ability.

The route crosses the Pas de Peyrol, the highest mountain pass in the Massif Central at a height of 1589m – just 200m below the summit of the Puy Mary. In other words, this is a route best suited to the confident cyclist.

The route is all tarmac, and almost exclusively on-road. A light road bike with forgiving gears will maximise your chances of getting up the Puy Mary.

The ultimate intention is for the route to connect to a cycleway along the Lot valley to the south (V86). That’s a long way from completion – shame, because it promises to be a scenic marvel. But you could continue north to route V70 via Clermont Ferrand, following the valley of the Allier.

There are train services parallel to the route between Maurs, Aurillac and Massiac-Blesle station. Viviez-Decazeville station is 12km from the start at Port d’Agrès.

You can tackle the route in either direction, of course, but we think west-to-east has a greater sense of purpose and makes the climb of the Puy Mary a little easier. 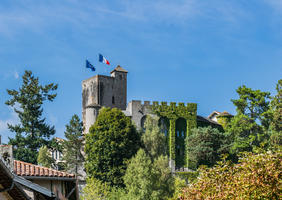 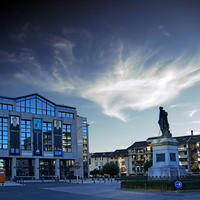 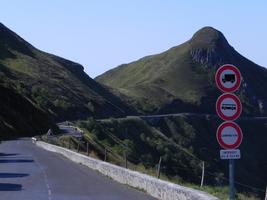 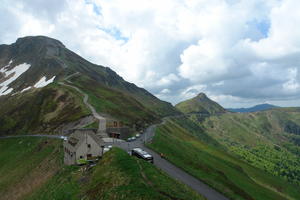 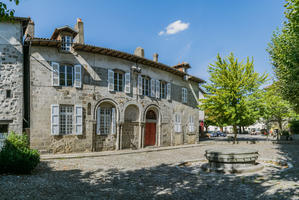 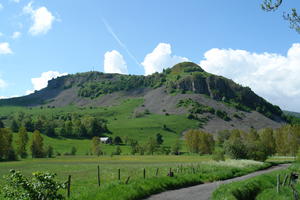 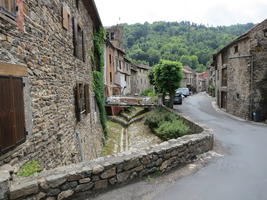 Road surfaces on the Eurovelo and Velo routes in France

Hello there! Are the Euro Velo and the Velo routes generally paved surfaces suitable for road bikes on 25-28mm tyres?

Or would they be better suited to more gravelly 30-40mm…

We've done it Westward and loved the scenery. We were happy to have a small grany ring fitted to our ladden cyclo-camping bikes becasue the last kilometer up to Pas de Peyrol is above 10%. Yet the reward is worth the effort. We went down the charming village of Salers (known for its breed of cows and locally made yet renowned cheese. And then onward to Périgord accross the Dordogne river.