Oxford Oxford is the start of the Cotswold Line railway, and the start of our route to Worcester. Private estates (such as Blenheim Palace) and the rarely bridged River Thames make it difficult to head north from the city without hitting busy roads.

The final Cotswold Line Cycle Route envisages a new roadside cycle path to make this easier, but for now, head north from the railway station car park, following signs to the canal towpath. Leave the towpath at the first road bridge, turning right onto Walton Well Road, and you’ll join Walton Street – aka National Cycle Network route 5. Turn left and follow the route; but after two miles, when NCN 5 leaves the main Woodstock Road, carry on along Woodstock Road to the next roundabout.

Here, take the cycle path along the A40 towards Eynsham and Witney. This five-mile plod may not be too inspiring, but it’s safe and efficient. At Eynsham, cross onto the north side when the signs for Witney tell you to, but then take the next road north – Cuckoo Lane. Congratulations: you’re in the countryside at last.

Hanborough (10mi) Alternatively, you can pick up the route at Hanborough station, then follow the roadside cycle path. From here, the route follows quiet lanes towards Charlbury. The lane on the north side of the Evenlode Valley, after crossing the railway at Ashford Mill, is particularly delightful.

After Fawler, take the next left down to the B-road, and turn right along the private Cornbury Park drive after crossing the railway again. The Cornbury estate has generously given permission for cyclists to use this and the unpaved footpath that skirts the deer park, which makes for a memorable entrance to Charlbury. There’s a difficult kissing gate on the path: you can manhandle standard bikes through, but tandems, cargo bikes and such like will struggle.

Charlbury (16mi) Charlbury itself is a pretty Cotswold town with four good pubs and a couple of handy shops – notably the cyclist-friendly Deli & Cafe. Plus, of course, there’s a railway station on the Cotswold Line, the busiest between Oxford and Worcester.

It’s also the home of cycle.travel. Wave at us as you pass through!

The route out of Charlbury is a little circuitous, but follows the quietest and most attractive lanes in this corner of the Cotswolds. The track from the Ditchley Park gates is rough and requires care on a road bike.

Chadlington (21mi) After Spelsbury, note (but don’t take) the turn to the village of Dean on the right. This is the home of local MP David Cameron; Jeremy Clarkson is building a new house in the next village, Chadlington; Rebekah and Charlie Brooks live on the Sarsden Estate, a mile further on, and cheese-making pop star Alex James’ farm is just after that. Yes, this is the heartland of the ‘Chipping Norton Set’, but fortunately the roads aren’t too infested with 4x4s and black Audis. In fact, once you’ve tackled the climb out of Chadlington, the road past Sarsden is beautifully quiet. 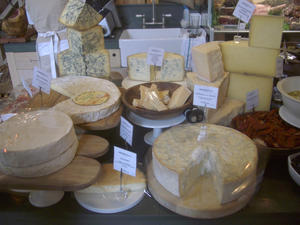 Kingham (28mi) Kingham is the next station on the line. The village regularly features in lists of the most desirable place to live, and its two gastropubs cater for well-heeled locals. (The Kingham Plough has a milk vending machine around the back!) The ultimate foodie experience, though, is Daylesford Organic, the super-chic farm shop on the lane out of the village. 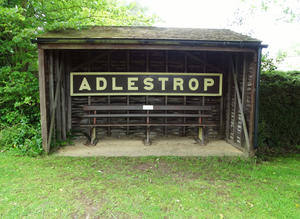 Adlestrop (31mi) An unsurfaced bridleway (can be muddy in winter) leads to Adlestrop, immortalised in Edward Thomas’ poem about the Cotswold Line and rural railways in general:

Yes, I remember Adlestrop –
The name, because one afternoon
Of heat the express train drew up there
Unwontedly. It was late June.

Trains no longer draw up here – the station is long closed. But the old nameboard has been preserved and now adorns the bus stop.

Moreton-in-Marsh (35mi) A quiet lane follows the valley from here to Moreton-in-Marsh. At Moreton, the main A44 heads into the picturesque town centre. If you’re heading straight for the station, you can turn just before the railway bridge onto a tarmac footpath crossing the meadows.

For the most part, the Cotswold Line Cycle Route does a neat job of avoiding hills. But you can’t cross the Cotswolds without a bit of climbing – and it’s in this section that you’ll encounter them.

A narrow footpath from Moreton-in-Marsh station car park leads out onto the main Fosse Way. Cross this onto a country lane signposted to Batsford village (doglegging very slightly right then left), and the first climb begins. Batsford is a few yards off the route, but this ridiculously pretty estate village is worth the detour. 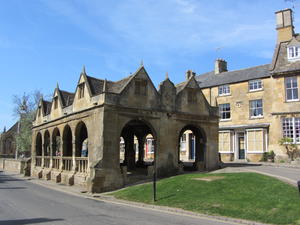 Chipping Campden (43mi) The route winds around the hills to Broad Campden, where a lovely narrow lane emerges by the friendly Bakers Arms – a proper country pub. Chipping Campden, a mile further on, is one of the tourist hotspots of the Cotswolds and an excellent place for lunch if you didn’t succumb at the Bakers Arms. The almost cathedral-like church, built on the proceeds of the wool industry, is certainly worth a visit.

The gruelling Dovers Hill, just beyond Chipping Campden, is one of the most famous cycling hill climbs in Britain… and that’s exactly why the Cotswold Line Cycle Route doesn’t follow it. Instead, it follows a hidden, traffic-free lane along the top of the escarpment, before descending to Mickleton on a slightly more forgiving road. Enjoy the descent, but don’t forget to stop at the junction at the bottom!

Honeybourne (50mi) Quiet lanes parallel the railway line to Honeybourne, where there’s another railway station. Look out for the 13th century Thatched Tavern in the village; refreshments are also available at the All Things Wild wildlife centre on the way to the station.

This is the Vale of Evesham, one of the richest fruit-producing regions of England, and you’ll see many greenhouses and processing plants near the route. After crossing the B4035 and passing Planet Produce, you’ll come to a crossroads of tracks. The official route goes straight on, and though it’s a great ride in the summer, be aware that in wet weather it can be very muddy. You can instead turn left (south) on a gravel farm bridleway which is a little more weatherproof.

For now, the signage stops at Badsey pending an upgrade to the A46 bypass crossing, so you’ll need to follow the map from here through Evesham. Take care when crossing the busy bypass.

Evesham (57mi) The route doesn’t go through Evesham town centre, but instead heads south on back streets from the suburb of Bengeworth; the signs resume at the southern edge of town. However, you can follow the main road across the river from Bengeworth for the town and its station.

Leaving Evesham, the signs resume at the roundabout on the southern edge of town. Here the route follows a functional if not exactly attractive roadside cycleway for a mile. Take care when crossing the road near Hinton: you may find it easier to join the traffic for a minute, pulling out into the hatched area.

Elmley Castle (63mi) From here, the Cotswold Line Cycle Route follows a rural road through rolling Worcestershire countryside, via the attractive village of Elmley Castle. The bulk of Bredon Hill looms to your left. The descent back to the River Avon at Pershore is enjoyable, with an optional path diversion under the arches of Pershore Bridge into a small riverside park. 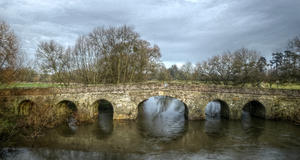 Pershore (67mi) Much more pleasant since the main road was routed away, Pershore has good pubs, thriving independent shops and an interesting abbey. The cycle route turns off the High Street at the marketplace. It’s just ten miles from here to Worcester, almost all on rural lanes. Inevitably there’s a modest climb out of the town, but it’s easy going after that. 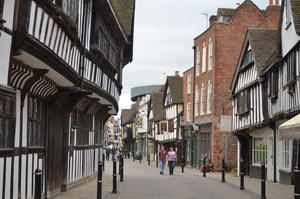 Worcester (76mi) The entrance to the Faithful City crosses the bypass on a brand new cycleway bridge. From here, a traffic-free ‘Pedway’ (Worcester’s name for traffic-free paths) takes you towards the canal basin and quiet residential streets before arriving on the riverside. The final section, on the River Severn promenade, is glorious. Continue past the cathedral until you reach the cafés at Worcester Bridge. And from here, of course, you can get the train home!