Bude The Cornish Way starts at Bude, a pretty resort town with an attractive harbour – and immediately splits into two.

You can take an inland route south on more rural lanes, mildly hilly, endearingly quiet, and fairly direct; or you can follow the coastal route past cliffs and beaches. The latter has spectacular views, but the hills are truly gruelling. A fit rider on a light bike will have no hesitation in plumping for the coast; everyone else should weigh their decision (and their panniers) carefully.

It begins innocently with a quiet ride along the coast, but Widemouth Bay marks the first of three crazily steep climbs on the tiny, winding lane. The scenery is magnificent, and you’ll have plenty of time to appreciate it as you push your bike up the hills. Just tell yourself that you’re taking a morning to walk the South West Coast Path.

The inland route from Marhamchurch (above Bude) is more moderate, though far from pancake-flat. This is an isolated rural ride with few facilities: your best chance is by taking a short detour to Camelford, after the two routes have rejoined.

Bodmin Moor (18mi) By now, the coast has been left behind and moorland scenery has taken over. Bodmin Moor’s twisting, narrow lanes are as attractive as the coast route in their own way, though the road across the old airfield at Davidstow is hard work if the wind catches you in the wrong direction. To minimise visual clutter, cycle route signs are painted on the road here, so keep a close eye out and follow your map.

Bodmin (36mi) Finally the route descends to the famous Camel Trail, an off-road route which attracts thousands of novice cyclists every holiday. These first five miles are more subdued – the crowds really only throng the trail as it approaches the coast – but as ever, ride slowly past dog walkers and family groups. A fork in the trail gives you two options: left to Bodmin, or right to Wadebridge and Padstow. The main Cornish Way goes via Bodmin, but Padstow is a delightful detour both for its well-heeled daytripper vibe and the stunning waterside railway path that leads there.

Bodmin is a little down-at-heel, but has a useful supermarket and a handful of cafés where you can refuel. You might hear the occasional toot from a steam train: the Bodmin & Wenford Railway uses those lengths of trackbed that the Camel Trail hasn’t laid claim to. There’s a useful mainline railway station at Bodmin Parkway, four miles out of town on a fully signposted route (if hilly). 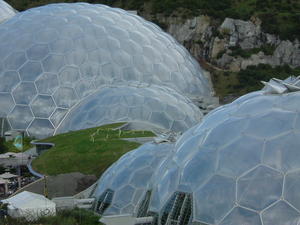 Eden Project (48mi) Forgotten lanes along a closely wooded valley slowly deliver you to one of the highlights of the route: the Eden Project. This space-age celebration of the natural world needs no introduction, and most Cornish Way cyclists will make time for a visit. Don’t forget to mention you arrived by bike for a discount on admission; the project appears to bear no ill-will to cyclists even though Sustrans beat them to a £50m lottery grant!

St Austell (52mi) Mid-Cornwall has an intricate network of cycle routes on former quarry railways, and you’ll see signs for the first of them here. NCN 3 continues to the warrenlike town of St Austell, an unpretentious place perhaps best known for its brewery – St Austell ales are inescapable in Cornwall. 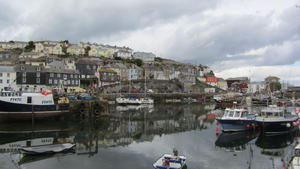 Mevagissey (58mi) For all St Austell’s workaday qualities, Mevagissey – seven miles on, along a lovely traffic-free path – is absolutely picture perfect. This harbour village has long been sought after by London visitors, and it’s the route’s first taste of holiday Cornwall. It also marks a return to the steep coastal lanes, though mercifully, none as taxing as the Bude section. Not to worry: there’s always a St Austell pub whenever you need a rest. Portloe, right on the coast, is a particularly pleasant lunch lunch stop.

Truro (82mi) The route descends to the Fal estuary at King Harry Ferry, where the busy car ferry (small fee) takes you over to the west bank and a steep climb up to a secluded wooded path; you may be lucky enough to see peregrines here. Two routes are signposted, one through Truro and another which bypasses the compact cathedral city. For overnight accommodation, one enjoyable option is to take the train from Truro to Falmouth, an enjoyable harbour town with good pubs and restaurants, and B&Bs aplenty.

After Truro, the route makes great use of the mineral tramways that once served Cornish industry. Much of the first section is on the old tramway route from Perranwell to Portreath, now the shortest signposted coast-to-coast cycle route in Britain!

Redruth (93mi) Redruth and Camborne run into each other, former industrial towns that have yet to attract many tourists. After a brief flirtation with the busy streets around Redruth station, the route climbs to the slopes of Carn Brea for a fascinating short stretch past the old mines. (There’s a five-mile circular route here if you have time for a diversion.)

Hayle (105mi) NCN 3 enjoys its own coast-to-coast swerve from Hayle, on the north coast, to Marazion in the south – just six miles on winding, low-lying lanes. You can stop at St Erth for an excursion by train to nearby St Ives, Cornwall’s finest resort whose narrow streets are home to art galleries, boutique clothes shops, and Cornish pasty sellers alike. Marazion is much smaller but certainly worth the half-mile detour off the route, particularly for the views across to St Michael’s Mount – the twin of Mont-St-Michel, with regular boats from the village. 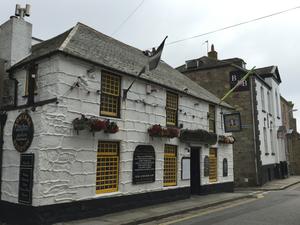 Penzance (113mi) The cycle path to Penzance just ekes out a space between the beach and the Great Western Railway. Don’t be surprised if you’re overtaken by a High Speed Train completing its long trek from London Paddington – after all, it might be your transport home. The town has few ambitions to serve as a resort and is all the better for it, with many local shops and a fine range of pubs. Tie up by the station and walk up the oddly named Market Jew Street to Causeway Road, the heart of the town.

The route clings to the coast past the fine fishing village of Newlyn, where you’ll see Stevensons trawlers returning with their latest catch; you can buy direct from their shop here, or in the smaller outlet in Penzance. 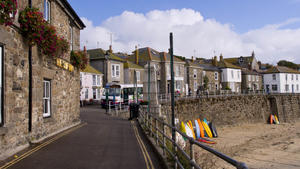 Mousehole (117mi) An excellent coastal path carries onto Mousehole (pronounced “Mow-zull”, the first syllable rhyming with “how”). With its harbour and pubs, this is just what you’d expect a Cornish fishing village to look like.

The climb out of Mousehole is laughably steep and few would begrudge you pushing up it. There’s another such hill at Lamorna, but otherwise, the last 11 miles to Land’s End are relaxing, rolling riding. 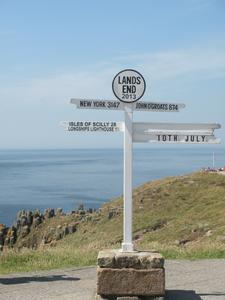 Land's End (128mi) A sandy bike path bypasses the notorious A30 on the final stretch, going via Sennen Cove which is, truth be told, altogether nicer than the slightly tacky mess of Land’s End itself. But you haven’t cycled all this way for the destination; the journey is its own reward.