Dieppe Welcome to France – and it’s everything you hoped it would be.

The 35-mile ride from Dieppe to little Forges-les-Eaux is superb, and a clear statement of intent for the future development of the Avenue Verte. After five miles of level on-road cycling, you drop down onto a magnificent railway path the envy of any in Britain. This easy, but always scenic, route will take you all the way to Forges.

First, though, comes the Dieppe ferryport, rather less sparse than its English equivalent (and you can fill up your water bottles in the terminal). The roundabout here is the first place you’ll see the French Avenue Verte signs, a simple design in black on yellow or green on white. Beware: a sign pointing left at a junction doesn’t necessarily mean “turn 90° left”, but often just “take the road next to this sign”.

Follow the coast road into Dieppe. The route crosses the first bridge but turns left immediately before the second: that said, it‘s worth taking the detour across the blue bridge for a glimpse of this surprisingly attractive town.

Arques-la-Bataille (8km) Keep your eyes peeled as the route takes you past Dieppe station and onto the straight, traffic-calmed D road to Arques-la-Bataille. The traffic-free path begins here, all smooth tarmac and cycle-friendly, wide wooden gates. It’s a little windng at first, finding its way past lakes, but soon settles down onto the old railway following the valley of the Béthune.

All railway paths should be like this. It’s wide, in excellent order, clearly popular with the locals, and retains enough railway features for historical interest. The road crossings are well designed so you’ll rarely have to stop; the old crossing-keepers’ cottages are enviable and always well-kept.

The path has an open aspect, not hemmed in by trees, so the views are wide-ranging. There’s much to see beside the path, too, from the chateau at Mesnieres to the gourmet café in the old station at Nesle/St Saire. Signs encourage you to venfure off-piste, to bars and restaurants in villages, and the larger town of Neufchâtel-en-Bray.

Forges-les-Eaux (55km) Serqueux is still a railway junction of some import, and the route takes a brief séjour on roads and tracks to get past it. It returns to the railway, though, for the final entrance to Forges, a pleasant little town with a very traditional French market square. There’s plenty of accommodation here for your first night in France.

Were it not for the recession, this next section could have been railway path, too. France’s government, however, is determined to spend its way back to prosperity, and is putting the disused railway from Forges to Gisors back into commission. That’s good news for local people, of course, but cyclists needn’t feel let down: the local lanes are delightful and never too hilly. 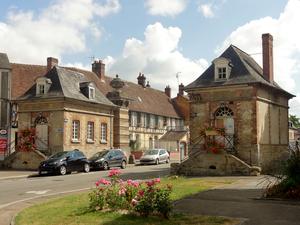 Gournay-en-Bray (82km) This is the Pays de Bray, a quiet country of farmsteads and tiny villages dominated by their churches. Chiming bells mark your passage from one gentle hill to the next. The only settlement of any size is Gournay-sur-Bray, a typical French market town with bars and a friendly pizzeria clustered around the square for midday refreshment.

The first 2km after Gournay’s resuscitated railway station are a little busy and featureless. You may think you’ve taken a wrong turn, but a modest climb takes you into quieter country again.

Saint Germer de Fly (90km) Little St Germer de Fly deserves half an hour; the stunning Benedictine abbey is being restored and, if open, is worth a visit.

The Avenue Verte splits here. A left turn will take you on the circuitous longer route via Beauvais and Senlis; however, we turn right for the more direct route to Paris. Bear left at the next fork.

Neuf Marché (97km) At Neuf-Marché, a little village on the main Paris–Dieppe road (but not, to the disquiet of villagers, with a station on the new line), there’s a handy boulangerie just off the route. Here too is the steepest climb since Dieppe, setting you up for a long, enjoyable descent into the historic town of Gisors. 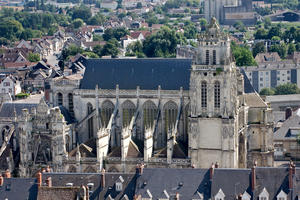 Gisors (118km) Gisors’ 11th century castle and cathedral-like church enjoy a commanding natural position overlooking a bend in the river Epte. The town is less touristy than this might suggest, but you can eat at the creperie at the top of the hill, and hotels are available. There’s also a friendly bike shop on the main street, welcoming Avenue Verte cyclists, and a railway station with Transilien commuter services to Paris (bikes carried without booking).

The passage across the rural Vexin is unforgettable. Rarely will you have cycled anywhere so unspoilt, yet so undemanding on your legs. Tiny lanes and car-free gravel tracks form a secret route where few venture.

Beware, though. There are virtually no facilities in the 35 miles from Gisors to the urban New Town of Cergy, and the few boulangeries keep very traditional opening hours including midweek closures. Stock up at Gisors to avoid being caught out.

Bray et Lu (139km) The stage begins with a 12-mile railway path along the Epte valley to Bray-et-Lu, a little narrower than the Dieppe–Forges trail but still exemplary. Country lanes lead you from here up a slow, easy ascent to the heart of the Vexin.

Maudétour is the high point, where the route eccentrically dives off onto a bumpy grass track; it’s cyclable (just), but assuming you can withstand 200m of mildly busy D road, just stay on the road and turn right at the end.

Note the eccentric name of Wy-dit-Joli-Village (“Wy, said to be Pretty Village”), its subtitle bequeathed by Henri IV while hunting nearby. 2km to the south is Enfer, or “hell”.

Theméricourt (160km) Gravel tracks lead to Théméricourt, where you might be lucky enough to find a restaurant; another track bypasses Vigny, but we see no reason not to stay on the road through this attractive village.

A rare climb after Sagy, the hardest of the day, leads to Courdimanche – and suddenly, that’s it for the countryside.

Cergy (173km) There’s no gradual transition, no creeping urbanisation. Rather, Cergy’s station square, futuristic in that ’70s way the French do so well, marks the abrupt start of Greater Paris. There’s an RER suburban express, municipal bike hire, and a (very welcome) chain bakery. It’s 2km but a million miles from the Vexin.

Urban it may be, but the route from Cergy to the Seine is faithful to the ‘green’ promise, largely following city bike paths through woodland. (Incidentally, ignore any signs claiming it’s only 30km to Paris: they’re wholly mistaken.) After crossing the Oise at Neuville, double back on yourself and follow the waterside path to the mouth of the river. 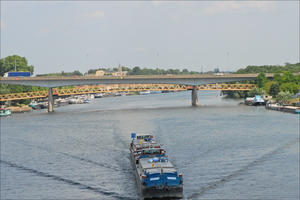 Conflans Sainte Honorine (182km) Conflans is exactly what it sounds like: the confluence of the rivers Oise and Seine. The town is the capital of French barge life, with a waterway museum and dozens of moored houseboats. Commercial barges ply the slow-flowing Seine night and day, loaded with coal, tanker liquids and containers, all with living accommodation on board and a little Citroen parked on the back deck.

You can follow the riverside road through Conflans and Herblay if you like, but the official route takes a short-cut through the forest of St Germain. The forest tracks aren’t too rough but road bike owners may choose to stay by the river.

Rueil Malmaison (206km) Rejoining the river at Sartrouville, the route follows good quality bike paths along the right bank, then crosses to chic Rueil-Malmaison where there are cafés around a new square. The comfortable track takes you to the decidedly less chic port area, where a footbridge over a backwater is so steeply ramped (to preserve navigable headroom) that lifts have been provided for bikes!

Gennevilliers (215km) Soon the route heads inland on the busy Avenue de Stalingrad. In theory the passage through the port area of Gennevilliers follows segregated cycle lanes. In practice, parked lorries often block the route, and you may find it easier to stick to the road. Take care near the new tramway, where your wheels may fall foul of the tracks or the subtle ramps up to platforms.

Saint Denis (223km) Like London, Paris has its urban canals, but the sheer size of the Canal St Denis is a world away from the little Regent’s Canal. The bumpy towpath gives a good insight into this multicultural area. Extensive regeneration projects are underway, so don’t be surprised to be diverted off the towpath now and then.

The St Denis meets the Canal St Martin at a T-junction. Turning right here, past an area used for the annual ‘Paris Plages’ (Paris Beach) summer festival, speeds you along segregated lanes into central Paris. Follow the N/S signs where the Avenue Verte ones are missing. The final approach to the Seine is along the Rue St Denis, a pedestrianised shopping street where cycling is permitted but, frankly, impossible due to the sheer number of walkers. You may find it easier to brave the parallel roads, or simply push. 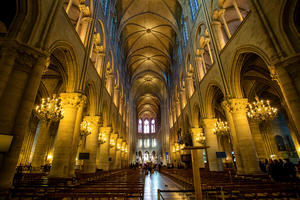 Make your way through the crowds to take a picture in front of the sign (at the north-west corner of the cathedral) reading ‘London 408km’. Many were easy, some hard-fought; most picturesque, a few less so. But the achievement is greater than the sum of each individual kilometre.