The last decade has seen a resurgence of cycling in Worcester. The compact city centre is ideal for travel by bike – as long as you pick the right route. 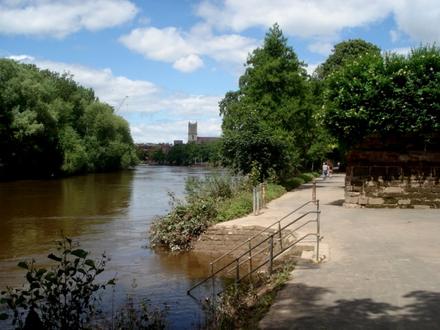 Worcester was built around a crossing of the River Severn, and the river still defines the city’s geography today. Two riverside paths head south from Worcester Bridge towards Diglis, where they’re now connected by the striking new Diglis Bridge.

The city’s other waterway is the Worcester & Birmingham Canal. The towpath is fully cyclable and has been recently resurfaced, though the descents at locks are steep and narrow.

Dozens of cycle routes have been built as part of the estates in the east of the city. These are joined together by a circular route, or in Worcester parlance, the ‘Orbital Pedway’. By contrast, there’s very little off-road provision to the west of the Severn, in St Johns and Lower Wick, though the Sabrina Bridge does at least link the University with the city centre.

Worcester is something of a hub on the National Cycle Network, with three routes converging here. Leisure routes have been signposted into the surrounding countryside, marked with a series of coloured symbols (such as a purple square or green triangle).

Post-war redevelopment wasn’t kind to Worcester. Cars race between the traffic lights and junctions on the city centre ‘relief roads’ of City Walls Road and Deansway, making the cyclist feel distinctly out of place. The ring road has taken some traffic away from the centre, but not enough.

It’s a similar story on the main arterial roads: on the narrow Newtown Road, for example, impatient drivers squeeze past the weary cyclist battling up the hill. This means there’s no easy way from the east of town into the city centre.

But once you’re away from the centre, the story is much more pleasant. You can often carve out a route through residential estates without encountering much traffic.

Worcester’s terrain is very sympathetic… as long as you stay by the river. Going east, however, requires a fairly taxing climb out of the valley. The west bank is more forgiving.