Your routes around Swindon

Let’s get the obvious out of the way first: you don’t have to cycle across the Magic Roundabout. In fact, though there are several missing links, getting across Swindon is easier than you’d think. 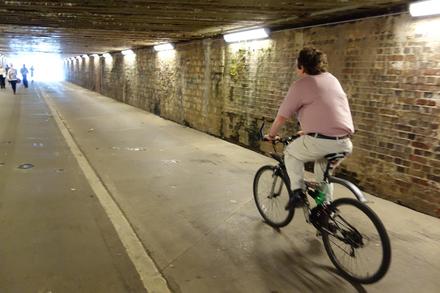 This traffic-free path might not have the romance its name implies, but it’s a fantastically useful route nonetheless. It’s the main cycle route from West Swindon to the town centre, passing from Eastleaze, via Rodbourne, to the station. The two useful underpasses beneath Great Western Way and the mainline railway are greatly preferable to traffic lights and bridges. It’s just a shame that the path gives out a short way before the station.

Many wouldn’t guess that the cycle path heading north-east from the Magic Roundabout was once the Wilts & Berks Canal, but one surviving old bridge gives it away. This route provides a useful alternative to the unpleasant, busy Drakes Way dual carriageway, leading to the Greenbridge roundabout. You can continue from there along the Oxford Road, though frankly the repeated interruptions from side-roads get rather wearing.

Getting in and out of town

Unfortunately, Swindon’s bike paths largely give out at the town limits, forcing cyclists onto the busy roads. In particular, the roads to Wootton Bassett, Shrivenham and Highworth are busy, narrow and unwelcoming. We can’t recommend these to the novice cyclist, and we salute those who do cycle that way.

If this is your chosen commute, make sure you’re well armed with lights and hi-vis, ride assertively, and keep up the pressure for a safe alternative. Sustrans and Swindon Borough Council have improved a short length of the A361 north to South Marston Business Park, making a little bit of the Highworth journey less hair-raising, and they’re also planning a safe route to Wootton Bassett – though at £1m it won’t come cheap. For now you can take a circuitous, slightly quieter route to WB.

Swindon is a railway town, and the High-Speed Trains used for almost all its services each have space for six bikes (at the end of carriage A, at the country end of the platform). The first stops in each direction are Chippenham, Didcot, and Kemble (for Cirencester).

The railway path, part of National Cycle Network route 45, runs round the south of Swindon on a high embankment. Estate paths and residential roads extend it in each direction, joining with the Western Flyer and Coate Water. It’s not tarmaced but the surface is reasonable in most weathers. It’s a useful route if you need to get from east to west without hitting the town centre.

Getting to this industrial park in the north-east of Swindon, one of the town’s largest employment sites, is unfortunately much harder than it ought to be. There’s a new cycle path for the last leg of the journey, built alongside the busy A361, and a handy pair of cut-throughs between Kingsdown and Stratton St Margaret.

However, there’s no easy way across the railway, only a narrow, stepped footbridge where you’ll need to lift your bike. As for a continuation to Highworth, we can but dream!