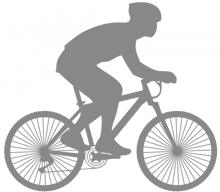 Family: Married with two adult children who no longer live at home

Work: I am a free-lance cycling instructor working mainly with Cycle Experience delivering Bikeability training to primary schools in Wrexham, Flintshire and Denbighshire and also Cheshire West and Chester.I also work for Expedition Wise as a mountain leader on walking challenges and a member of the support team on cycle challenges. Previously I worked as a teacher, a postal worker and - for 31 years as a firefighter in the North Wales Fire and Rescue Service

Cycling: I own a British Eagle Touristique, a Spa Cycles Touring, a Giant XTC 3.5, a Specialized Sirrus Elite and a few project bikes which I like to repair and provide other people who would like to get cycling; I'm a self-taught bicycle repairer. I like steel bikes but have tried aluminium and carbon.

I'm a rugby league fan and have combined cycling with supporting my team (North Wales Crusaders) by cycling to away games. I've cycled in France and Spain and enjoy light touring.

I'm a member or the CTC and British Cycling and I've recently tried Audax events as a member. I ride with Chester and North Wales CTC (Wrexham Reivers), an informal club called the Cafehoppers plus rides with friends to rugby grounds.

(2021 - the Giant XTC and the Specialized have gone but I have another Giant road bike (SCR 1.0) a Holdsworth Mistral (1980) which I rebuilt to take part in the Eroica Britannia, A Kona Jake (used for Work) and a beautiful Ciocc with Campagnola Daytona gearing)