Putney Getting out of London by bike is rarely easy, but this route manages it with aplomb – by the simple tactic of staying next to the river. You’ll see all the best of the Thames: lithe rowers, glorious houseboats, grand mansions, and the locks, weirs and bridges that keep the river in order. It’s an enormously enjoyable route, and a great afternoon ride in its own right.

But just one mile upstream of Putney Bridge, you’ll find yourself heading away from the river and towards Barnes. What gives? Well, although you can follow the Thames to Teddington if you like, the signposted route takes you through Richmond Park – one of London’s cycling meccas. The broad tarmac paths across this green expanse are a joy to cycle. But don’t get carried away: this is one of few places in Britain with a formal cycle speed limit, 20mph. 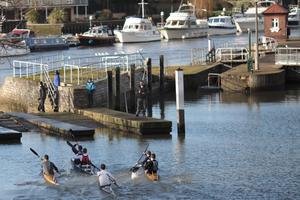 Teddington Lock (7mi) The route rejoins the Thames at Teddington Lock, the tidal limit of the river, a scene of great boating interest, and the location for Monty Python’s Fish Slapping Dance. From here, it follows the river for more or less the next 16 miles, flitting from one bank to the other. The magnificent Hampton Court Palace is the first landmark, and you cycle right past on the historic Barge Walk.

The path has a firm surface throughout, though it’s unsurprisingly busy with pedestrians, so don’t expect to make fast progress. At times the path is shielded from the river by trees, colonised by parakeets – yes, really. Thousands of the bright green birds have settled along the river, particularly between Kingston and Walton. The Weir pub, by Sunbury Lock, is popular with cyclists.

Weybridge (18mi) The route crosses onto the north bank at Weybridge. You can follow a shared-use pavement route if you like, but it’s much more enjoyable to cross on the little Shepperton Ferry, which operates until 5.30pm every day and welcomes cyclists. It runs every quarter-hour, costs just £3, and you summon it with a bell. From here, a short road section takes you back to the river for the run into Staines.

Staines (24mi) That’s it for the Thames, pretty much. You’ll meet the river again before Oxford, but there are few long riverside paths of the sort enjoyed downstream of Staines: it’s definitely the Thames Valley route from here, not the Thames Path. That means occasional hills, true, but also a more varied cycling experience.

Staines is soon dispensed with via some forgettable roadside paths, before the sharp climb up Cooper’s Hill on an unsurfaced lane. There’s a reason for the off-road diversion: this is Runnymede, where Magna Carta was sealed, where memorials commemorate the Commonwealth air forces and John F Kennedy, and where, in 1852, the last duel in England took place. 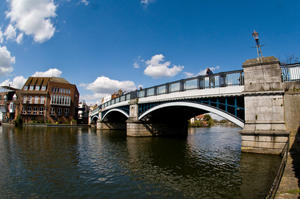 Windsor (34mi) Enjoyable quiet lanes take you through Windsor Great Park, passing the quaint gatehouses and post office. A gravelled path runs alongside the cavalry exercise ground, leading into the thoroughly touristy town of Windsor. It’s not always tasteful – some rather cruelly characterise it as Skegness-on-Thames. But lift your eyes above the crowds and you’ll see much to admire: the mighty riverside castle, the Georgian frontages, and the fine road and rail bridges.

Still, it’s no offence to say that the best thing about Windsor is the road out. This is a particularly lovely stretch of route, running across meadows to little Boveney and its 12th century church. Eton College’s colossal rowing lake leads to the frightfully well-to-do Bray, location of Heston Blumenthal’s famous Fat Duck restaurant.

Maidenhead (42mi) The winding route through Maidenhead is less distinguished, but after three miles you’re back out in open countryside. From here, the route gently ambles to the Thameside village of Wargrave along country lanes, cycleways and unsurfaced paths. It has a surprisingly remote, agricultural air for the heart of prosperous Berkshire.

Reading (58mi) A utilitarian roadside cycleway runs for four miles to the edge of Reading where, finally, we rejoin the Thames. The confluence with the Kennet, underneath the clatter of the railway bridge, is a landmark on the National Cycle Network. Turn left for Bristol, Cardiff and St David’s, or straight on for Birmingham, Chester, Holyhead… and, first of all, Oxford.

Reading’s riverside doesn’t have the big-money allure of Walton or Shepperton, but Caversham Lock and the buzz of boats back and forth provide a pleasant way to get reacquainted with the Thames. Briefly, that is – you won’t see the river for another 14 miles.

Kidmore End (62mi) From Reading to Wallingford, the route goes over the Chiltern Hills on country lanes. All winding single-track roads with trees encroaching on either side, this is great cycling country. As well as NCN 5 taking a slightly indirect course, there’s a signposted Chiltern Cycleway, plus designated ‘Quiet Lanes’ where cyclists and walkers have priority.

Checkendon (67mi) The route climbs from 50m at Reading to 200m near Checkendon, then back down again to the Thames at Wallingford. You’ll work up a thirst on the ascent, but happily, this is an exemplary route for pub-goers: the Reformation at Gallowstree Common, the Cherry Tree at Stoke Row, and the Black Tree at Checkendon, run by the same family for 110 years. Just off the route is the secluded King William IV at Ipsden – reason enough to limit your mileage this day! 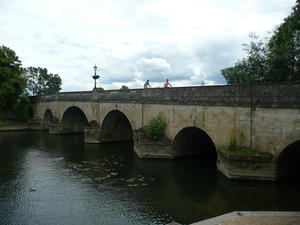 Wallingford (73mi) Wallingford is a charming and prosperous Thames town, well-heeled enough to have its own Waitrose, but still supporting independent shops on the High Street along which you’ll ride. The old Great Western branch line to the town is now a preserved steam railway, though if you do need to get to nearby Cholsey station you’ll find it easier to cycle the three miles.

Didcot (81mi) There are precious few quiet lanes in this stretch of the Thames Valley, and the route is chosen to make best use of them – even if that does mean climbing the marvellously named Wittenham Clumps, landmark chalk hills with fine views of the Thames and the abbey town of Dorchester. Poor old Didcot, four miles on, can’t match these scenic heights, but you can shortcut the two-mile route via Didcot Parkway station by crossing the railway footbridge just after the road underpass.

From here to the outskirts of Oxford, the route is a clever patchwork of cycleways, unpaved paths and residential roads. The surface is passable on a road bike, but more comfortable on a hybrid or similar. The first bumpy path delivers you past Didcot power station, where just three of the six cooling towers are left standing following detonation in 2014. 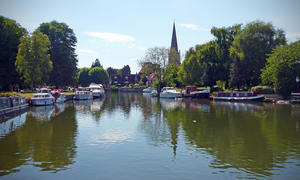 Abingdon (87mi) Abingdon is a likeable market town, formerly the capital of Berkshire until this part of the county was annexed by Oxfordshire. You’ll pass the Thames on a bridge marked ‘Wilts & Berks Canal’, remembering the old canal that once ran to Swindon and on towards Bath. The town centre is a little traffic-clogged, but Abbey Close and the riverside park are the ideal place for a coffee and cake stop.

A winding path through a riverside nature reserve leads you out of the town. At Kennington, three miles on, a volunteer-constructed path by the mainline railway brings you to the edge of Oxford safe from the over-busy roads above. 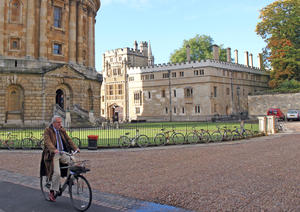 Oxford (96mi) There are two routes into Oxford. The official route follows tidy residential streets through the south of the city, but if you’re not in a hurry, follow the riverside path for the best views of the dreaming spires. The Iffley Farmhouse, by Iffley Lock, is a splendidly dishevelled pub from which to watch river life. After Folly Bridge (the old one with the island), cross on the narrow footbridge to rejoin the main route which takes you into the city centre.

Oxford is one of Britain’s cycling cities, with cyclists everywhere, plentiful bike parking, cycle cafés, and bike lanes of admittedly variable quality. Just make sure you lock your bike securely!