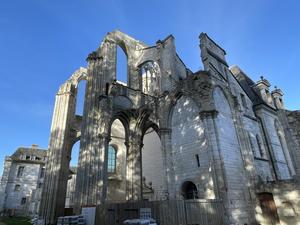 Saint Wandrille The route leaves the Seine in the shadow of the Pont de Brotonne, the third of the modern suspension bridges crossing the lower Seine. Saint Wandrille itself is far from modern, dominated by Fontenelle Abbey – founded in 649 and still an active monastic foundation today. The daily offices are said at times from Vigils at 5.25am to Compline at 8.35pm, but even wandering around the part-ruined abbey is a spiritual experience in itself.

From here the route follows wonderfully quiet valley roads before joining the busy D5 after La Folletiere. It’s a moderately taxing climb up to the plateau of Yvetot, with a gratuitous detour along a tiny minor road and back to the D5 for good measure. 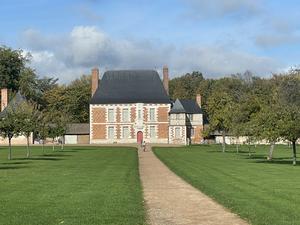 Yvetot (18km) The approach to Yvetot follows a roadside cycle path past hypermarkets and schools. It’s not particularly endearing and we wouldn’t blame you for ignoring the signs and taking a shortcut to the town centre.

Don’t miss the town itself, though. As a small regional capital (of the Caux) it wouldn’t feature highly on the tourist trail, but it does have a stunning modernist church, the Église de Saint Pierre – built in the 1950s to replace a church damaged in WW2. Similarly eyecatching to Coventry Cathedral or Liverpool Metropolitan, it’s all the more remarkable in a town of just 11,000 residents. Yvetot’s other sightseeing draw is the Manoir du Fay, a 17th century manor house that you’ll pass on the way out of town.

Now you’re up on the plateau, it’s easy riding until the descent into little Héricourt en Caux. The route follows the Durdent valley on minor roads and cycleways until, after Grainville, it joins the Veloroute du Lin. This tarmac rail trail takes you into Cany Barville. 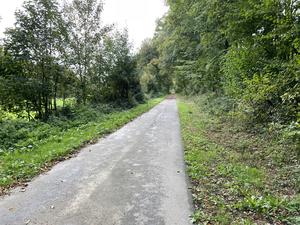 Cany Barville (49km) It’s easy to skip through Cany Barville on residential roads, following the signposts. This little market town does deserve a few minutes of your time, though, not least for the marketplace and Hotel de Ville, an impressive municipal statement that would be so much better if it weren’t a car park. Sadly the cycle shop in town has closed, but pretty much everything else can be found here.

Continuing along the Durdent valley, traffic is heavy for the first kilometre with families heading for the Lac de Caniel, an outdoor park full of kids’ activities. After that it’s quiet lanes once again, with a compacted-surface cycleway taking up the final approach to Veulettes. 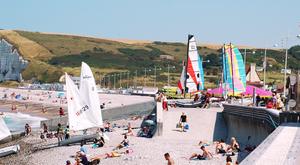 Veulettes sur Mer (57km) Sleepy little Veulettes calls itself “the pearl of the Pays de Caux”. The long, pebbly beach sits in front of a seafront lined with cafés and restaurants. On either side of the valley, the tall cliffs of the Alabaster Coast promise more climbing for the cyclist heading east or west. You can retrace your steps for a kilometre to pick up EuroVelo route 4, which parallels the coast on well-chosen lanes, or take the busier coastal D road for excellent views.