Llandrindod Wells ‘Llandod’, as locals call it, makes a good starting point for the ride. There’s a railway station (check out the vintage Intercity posters in the waiting room), plus supermarkets and local shops for essential provisions. A rather faded Victorian spa town, it still retains enough tourist facilities – principally hotels and cafés – to be useful for the visiting cyclist.

You can get your bike refettled and stock up on inner tubes at Heart of Wales Bikes, a friendly shop by the station. Llandrindod is, of course, home of the National Cycle Collection, a museum with every type of bike from the earlist velocipedes to modern racers, and hats duly tipped to Britain’s cycling champions.

Blue Sustrans ranger stickers guide you through the one-way system and out on a minor road past Powys’s County Hall – and immediately it becomes clear that this is a route for people who like hills. The climb out of Llandrindod, and the exhilarating descent on a narrow, winding, tree-lined road, will disabuse you of any notions that this might be an easy amble around the countryside.

But another characteristic of the Radnor Ring is that motor traffic levels are extremely low, and you’re more likely to see fellow cyclists on these tiny little roads than speeding Audis. You can rest your bike in an idyllic wooded glade by the river at the foot of the hill, and walk across to the medieval St Michael’s Church – or you may prefer to keep your momentum for the next uphill.

Hundred House (9mi) After Llandrindod, the route settles into an undulating but not too taxing meander through the distinctive mid-Wales landscape. The watershed of Mynyddyrheol, where an off-road option (no longer promoted) once crossed the main route, leads into an enjoyable long descent to the Edw valley. It meets a (quiet) road at Hundred House, the biggest settlement since Llandrindod though there’s little here save the eponymous pub (meals and accommodation), campsite, and agricultural supplies shop.

Glascwm (14mi) Gird your loins, though, because the steepest climb of the route lies in wait. Three gentle miles lead into the sharp ascent through Glascwm (‘green valley’), where the road surges aggressively skywards. Barrows are signs of prehistoric settlement in this unforgiving yet verdant landscape, and certainly the hilltop location would have been an excellent location for a fort.

Gladestry (19mi) One more haul gets you across the hill to Gladestry, a tiny valley village with an old-fashioned air, its Post Office now closed but immaculately preserved. The Royal Oak pub sells warming food and local ale, but closes on Monday and Tuesday lunchtimes. Signs for Offa’s Dyke Path suggest that the border can’t be far away, and indeed, as the route loops to the south of Hergest Ridge’s imposing bulk, it finally crosses into England. The striking half-timbered pile of Hergest Court, at the foot of the sharp descent from the ridge road, is as clear a sign of Herefordshire as you could ask. 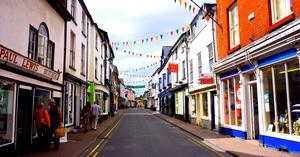 Kington (24mi) Kington, Presteigne and Knighton are three of the nicest towns on this or any cycle route. It almost seems a shame that they’re clustered within 13 miles, but do take the opportunity for a short stop, at least, in each.

Kington is an old-fashioned place with butchers, greengrocers, market hall and all. Keen to attract tourists, its pubs and B&Bs proudly boast “walkers welcome” signs, and cyclists will find themselves equally at home. We especially like the Swan Inn on the old Market Place, its front bar imaginatively converted into a tea-room, its ‘walkers’ bar’ graced with an endearing collection of clutter; and the local beer and cider will either refresh you for the hills to come, or convince you to make an unplanned overnight stop in this attractive town.

Before the next hill, though, there’s an anodyne six-mile stretch of B-road to Presteigne. It’s the least interesting part of the route, but bearable enough. Look out for the Stagg at Titley, the first pub in Britain to win a Michelin star. 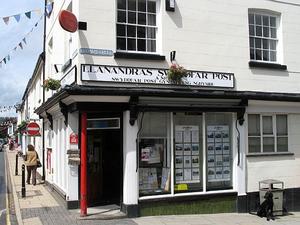 Presteigne (31mi) The smallest and the most affluent of the three, Presteigne is a little one-street town on the River Lugg. Though it’s just on the Welsh side of the border, the black-and-white buildings and slightly Bohemian air give it a very different feeling to most of rural mid-Wales.

You could carry on up the Lugg valley from here, but the Radnor Ring has other ideas. Its route to Knighton is certainly challenging, climbing almost 300m over the watershed between the Lugg and Teme valleys. The tiny lanes, frequented only by tractors and cyclists, actually form the Wales/England border for two miles, and there are superb views to either side – not least to the Powys County Observatory, high on the next hill.

This signals the start of the two-mile descent into Knighton, a dramatic, twisting passage which the confident rider will enjoy hugely. Take care: the road suddenly narrows halfway down.

Knighton (37mi) Known as ‘Tref y Clawdd’ in Welsh, the “town on the dyke”, Knighton is a true border town: most of the town is in Powys, but the railway station is actually in Shropshire. The Glyndwr’s Way National Trail meets Offa’s Dyke Path here, and there’s a worthwhile Offa’s Dyke visitor centre. The aptly-named Narrows climb sharply from the Market Place, and are pretty much uncyclable but worth a walk. Of the many pubs, we like the Horse & Jockey, on the road out towards the station. Local shops offer the chance to replenish provisions for the exertions ahead. 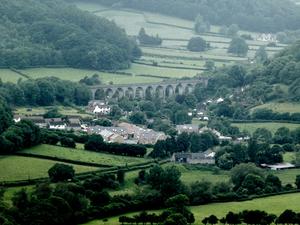 Knucklas (41mi) This, more even than the opening miles, is truly Wild Wales. In 30 miles of cycling, there is just one village. You begin on the English border, and emerge at the end of the day in deepest mid-Wales. It’s the finest part of the route, and for every tough climb there’s a stunning view as reward.

It starts in England, with three miles of fairly gentle cycling on a narrow lane along the Teme valley. Your companion for the first 10 miles of the ride is the Heart of Wales Railway; with a train every four hours you’ll be lucky to spot one, but you can at least appreciate Knucklas Viaduct from beneath, a fine piece of engineering. Knucklas is this leg’s sole village: one almost expects a sign warning ‘Cyclists! Last pub for 20 miles’.

Llangunllo (45mi) As the route steadily climbs up out of the valley, there’s a real sense of leaving settlement behind. The ensuing descent down past Llangunllo Station to Pye Corner is a joy, with wide sweeping bends and the Lugg valley opening up before you.

But don’t get too used to it. There’s more climbing to come, as the route takes a challenging turn across the wild moorland expanse of the Maelienydd. No more wooded valleys, cosy farmsteads and village pubs. Bleak hillsides, unfenced roads and open skies are now the order of the day. The views are magnificent – if a little unnerving as you see another steep climb looming in front of you. Of these, the sharpest is that past Caltan, where the road takes a straight course down the hillside only to immediately climb again. Keep your nerve (despite the cattle-grid at the bottom) and get a head-start on the ascent.

Llananno (55mi) A recent change to the route has seen it take, if anything, even more rural roads to Llananno, with grass in the centre of the carriageway and more than a touch of mud. At times it seems like you’re following a private track to a farmyard, but this really is the route; be sure to close the gates after you. This new route cuts out a mile of busy A road, and now there’s only a short dogleg before peace returns.

From here to Rhayader, the route of the Radnor Ring is simply glorious. After cresting the hill at Llananno, there’s a long, rolling spin down a remote valley, as the road occasionally dips down to the river then climbs back up the hillside. 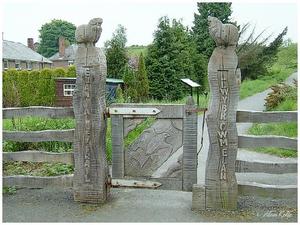 Rhayader (67mi) Even by the eccentric standards of Marcher border towns, Rhayader has unusual claims to fame. One is that it has, reputedly, more pubs per head of population than anywhere else in Britain. They’re a mixed bunch, but the Crown, the Triangle Inn (over the river in Cwmdauddwr) and the Eagles all deserve a visit. Many of the pubs were built for the Birmingham workers who came to build the Elan Valley dams: it’s visiting walkers and cyclists keep them busy today.

Rhayader has a worthy transport history, too. The River Wye was once a busy trading port here and boats were built in the town – hard to believe given the narrow, winding river. And now, it’s an important junction on the National Cycle Network, where Lon Cambria, the Lon Las Cymru and the Radnor Ring meet.

Llanwrthwl (73mi) Lon Las Cymru and the Radnor Ring share their course downriver to little Newbridge-on-Wye, following a narrow country lane on the west bank of the Wye while the main road hogs the valley floor. It’s not a flat ride, sometimes climbing up the valley side, sometimes diving to river level, but by now you should be used to that.

Road cyclists should watch out for the unsurfaced Old Coach Road section, between Llanwrthwl and Newbridge. It’s not as muddy as it once was, but it really requires a hybrid bike or tougher. If you’re riding on narrow tyres, you might be best advised to detour onto the main road at Llanwrthwl, taking extreme care in the fast traffic.

Newbridge-on-Wye (80mi) The two routes part company at Newbridge-on-Wye, for a pleasant but unspectacular link back to Llandrindod. A short section of roadside path guides you away from the busiest road. 84 miles later, you’re back where you started – but what a journey it’s been.