Aberystwyth The seafront at Aberystwyth makes for a memorable start to the ride. Lon Teifi shares its first 11 miles with Lon Cambria, the east–west route between Aberystwyth and Shrewsbury. It’s a slow ascent up the Ystwyth valley, mostly on an old railway path though occasionally ducking onto minor roads. When the routes fork, Lon Teifi (as Route 82) is the one that continues by the railway, meeting the Teifi valley at tiny Ystradmeurig. 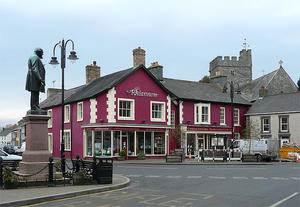 Tregaron (20mi) The railway path across the Cors Caron nature reserve is a wonderfully solitary experience – assuming the wind’s with you. There are bird hides beside the path for a spot of twitching. A moderately quiet B road takes the route into Tregaron, a tiny rural town with a passing nod to tourism in its craft centre and red kite museum. (You’re almost certain to see the fork-winged birds of prey circling high above.)

Largely level, the B road follows the valley down to Lampeter, passing Llandewi Brefi – where you can stop for a pint at “the only pub in the village”. For a lightly trafficed alternative, turn right at Llanfair Clydogau and take the lane down the other side of the valley.

Lampeter (31mi) Inexplicably, Lon Teifi avoids Lampeter town centre, taking a tedious detour past housing estates and car parks. Ignore the signs, and continue through this university town on the main road. You’ll rejoin the route at the western side of town just in time for the first hill in many miles.

Llandysul (47mi) A forgettable B road gives out to a pleasant minor road on the north side of the valley, especially enjoyable on the twisting, undulating section before Llandysul. We cycled this at sunset and it was a magical experience, the light darting in between overhanging trees to give occasional glimpses of the Teifi below. Keep your wits about you in Llandysul, a hilly village with an odd one-way system. 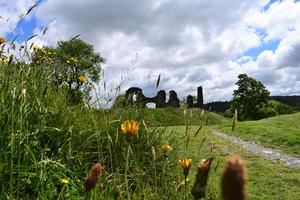 Newcastle Emlyn (57mi) A series of short, sharp climbs take you onto the A475, by which Lon Teifi enters Newcastle Emlyn. This very pretty town is an essential stop, particularly if you’re in search of a café. Do also take the opportunity to visit the castle ruins, on the banks of the river.

However, it can’t be denied that the roads leading in and out of the town are less than ideal for the cyclist, especially at rush hour. Heading east, there’s a nasty sharp climb across from Cwm-cou, and the slog up the B road after Cenarth is unpleasant as traffic speeds by.

For once, then, we’d suggest ignoring the official route, and making your way south-west from Newcastle Emlyn over the hill. It’s a tough climb out of the valley, true, but the lanes are delightful. You can also take the chance to visit the Caws Cenarth creamery, home of the exquisite Perl Las and other cheeses. Once you’ve topped the hill, it’s a lovely ride down the Cych valley to return to the official route at Abercych – with a friendly pub at the junction.

Cardigan (70mi) It’s a little flatter now as you follow lanes towards Cardigan, through strung-out Cilgerran, onto a riverside railway path passing the Welsh Wildlife Centre. Though Lon Teifi follows the south bank through St Dogmaels, do make a detour to explore the traditional market town of Cardigan – now something of a centre for outdoor activities. The climb out of St Dogmaels is steady but wearing. There’s then, unusually for the NCN, a mile on the fast, busy A487; fortunately the road is wide here. It’s worth it for the tiny, narrow lane that follows, diving to a ford at Castell Henllys. 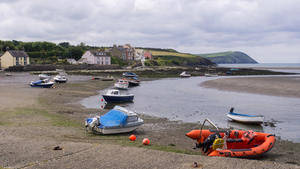 Newport (83mi) At the wonderfully named village of Felindre Farchog, a bridleway bypasses the main road for a while. MTBers and adventurous hybrid riders will enjoy the challenge, but most people will prefer to stick on the main road through to Newport.

Again, though Lon Teifi skirts the village, Newport is worth the detour; you can cycle down to the beach, refuel at the welcoming pubs, or (panniers permitting) load up at the superb butcher and warren-like second-hand bookshop.

Gwaun Valley (89mi) The last 10 miles of Lon Teifi are, without doubt, the finest. The Gwaun Valley is the land that time forgot – literally. New Year is still celebrated according to the Welsh tradition here, several weeks after the rest of the world. Though just a few miles from the holiday cottages of Newport, Welsh remains the language of the valley.

Nowhere is this more true than at the Dyffryn Arms – a tiny front-room pub of the sort you thought was long extinct. Beer and cider are served straight from the jug; Coronation prints decorate the walls; and the landlady Bessie is as often to be found in front of the hatch as behind it.

Fishguard (95mi) Just make sure to leave enough time to catch your train home from Fishguard. This is a town of three halves – the traditional town centre, the attractive old harbour at Lower Town, and the newer waterfront leading on to the ferry port. The ferry port is as unlovely as ferry ports ever are, but the rest is unpretentious and charming. If you still have miles left in your legs, the Celtic Trail offers hundreds of miles of beautiful rural riding from here…